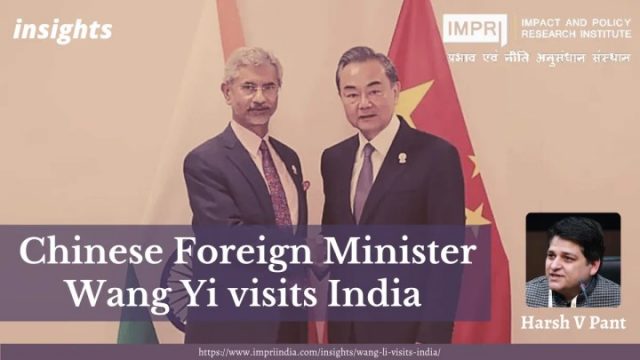 Some two years into the military standoff along the Line of Actual Control (LAC), Chinese foreign minister Wang Yi paid a short visit to India last week. The India leg of his trip was shrouded in secrecy even as other parts of the itinerary — Pakistan, Afghanistan, and Nepal — were well publicised. In diplomacy, secret visits are sometimes intended to break long-standing logjams and demonstrate a commitment to the resolution of conflicts. But this was no such visit. It was primarily aimed at testing India’s resolve and assessing if changing global geopolitics made New Delhi more amenable to giving in to China, much like in the past.

There used to be a time when railing against western imperialism with “like-minded” powers such as China and Russia used to be the high-watermark of India’s global footprint. The Russia-India-China (RIC) trilateral emerged in the context of the American unipolar moment in the immediate aftermath of the end of the Cold War. This RIC then morphed into Brazil, Russia, India, China (BRIC) and then added

South Africa (BRICS) as the global economic order underwent a transformation with the emergence of China and India as key economic powers. As part of these platforms, India tried to forge a partnership with China based on shared global outlooks. It was argued that this global convergence would eventually lead to a bilateral convergence as the two nations with divergent interests would be able to reconcile them by focusing on international challenges. It was another matter that China’s global interests were far more expansive than India’s and that there was hardly any hope beyond some tactical coordination at the global level. In the process, not only did Sino-Indian bilateral ties continue to suffer but India’s global footprint was also weighed down by the contradictions in the Sino-Indian global engagement.

But myths, once forged, attain a life of their own. And, Indian foreign policy continued to perpetuate this mythology till it was once and, hopefully, forever shattered by the bloody clashes of June 2020 in the Galwan Valley, leading to the deaths of 20 Indian soldiers. Since then, New Delhi has been steadfast that the normalisation of ties with China won’t be possible without peace and tranquility along LAC. As external affairs minister S Jaishankar suggested: “Our [India’s] relationship (with China) is not normal, given the presence of a large number of troops in contravention of the 1993-96 agreements.” This message was also reiterated by national security adviser Ajit Doval who was invited by Wang Yi to visit China to take forward the Special Representatives talks on border issues only to be told that this would be possible only after disengagement and eventual de-escalation at LAC.

Wang Yi was fully aware of Indian demands. He was in regular touch with Indian interlocutors over the last two years. Beijing is fully aware of the sensitivities of India on this issue. But being sensitive to Indian concerns is not a priority for the Chinese. Just before he landed in India, he weighed in on the issue of Jammu and Kashmir at the meeting of the Organisation of Islamic Cooperation (OIC) in Pakistan, knowing full well how this would be received in India. When Wang Yi said Beijing “heard the call of many Islamic friends” over the Kashmir issue, adding that it “shared the same aspiration”, the Indian reaction was swift and pointed. It named the Chinese foreign minister in rejecting his reference to India, reminding him that not only does China have no locus standing on the matter but also that India refrains from the public judgment of its internal issues.

Still, Wang Yi landed in New Delhi. The atmospherics were all wrong, the optics terrible and the underlying factors that make for a successful diplomatic trip absent. He came for a specific reason. Beijing has no interest in the normalisation of ties. Its unprecedented military mobilisation along LAC is a sign that China is not likely to relent in its long-term goal of trying to make India bend to its will. But it has a short-term problem with the BRICS summit meeting approaching and it views the Russia-Ukraine crisis as an opportunity to lure India into making some grandiose assertions about Russia, China and India standing up to the West.

China is worried about the trajectory of the Ukraine crisis. After having embraced Putin during the Winter Olympics with a “no limits” partnership, it can’t afford to ignore him now. At a time when Xi Jinping’s focus should have been on the economic revival of China post-pandemic, there is a Covid resurgence and a global conflict. China is far more exposed to the global economy than Russia ever was and the vulnerabilities for China are readily apparent. The West has not given any indication that it is willing to shift its focus away from the Indo-Pacific any time soon even as it has been more understanding of the Indian position on the Ukraine crisis. As the Chinese position gets ever more precarious, wooing India to seek a common ground remains an option for Beijing which it is trying hard to operationalise.

But New Delhi only has to look at this visit to see that there is no fundamental reassessment in Beijing about its India policy. It’s still about targeting India’s vulnerabilities — be it making common cause with Pakistan on Kashmir or with the Taliban in Afghanistan. Wang Yi’s visit would seem curious only to those who have no understanding of how China operates. There was a method to this madness. Only this time, Indian policymakers seem to have kept their own sanity. Hopefully, there won’t be any going back.

First Published in the Hindustan Times, Wang visit: Beijing is not reassessing its India policy on March 29, 2022