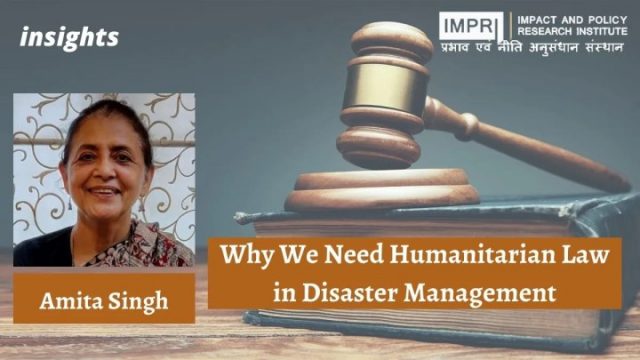 In one of the consultative meetings of the World Food Programme on disaster management organized by Sphere India recently, somebody raised objections to the role of humanitarian law in disaster management on the logic that this is already a part of the regular legal responsibility of governments. Should this be or not be? How would governments demand compliance to humanitarian responsibilities (not law) of the State when their own track record on human rights has always been a concern?

The dilemma reminds me of Hamlet’s soliloquy “To be, or not to be” in contemplating death and suicide or bemoan the suffering due to the pain and unfairness of life? Hamlet’s mind, while envisaging an answer to the question, muses on… “Whether it’s nobler in the mind to suffer, The slings and arrows of outrageous fortune… The heartache, and the thousand natural shocks, that flesh is heir to… For in that sleep of death, what dreams may come, When we have shuffled off this mortal coil, Must give us pause…” He reconciled that the alternative to suffering was worse.

The humanitarian laws or its robust cousin, the human rights laws, are alternatives to a charitable State where charity finds meaning only within the province of the State so the logic for alternatives becomes strong.

It would be clear in subsequent arguments that by questioning humanitarian laws in disaster management, one would prevent deepening government action and resilience building at the most vulnerable levels.

The UN Charter prohibits war and the use of force to resolve conflicts. Should then nations stop war preparations and formulation of rules that regulate and terminate armed conflicts? Wars have not been completely outlawed as wars in the shape of internal armed conflicts continue incessantly. So a mere existence of rules and Acts on disaster management does not prevent the State from bypassing, overlooking, or skirting liabilities related to human rights. Whatever happened to the rural poor migrant workers during the pandemic is a public tragedy.

Those who built the big cities and special economic zones which filled State treasuries with FDI and FII, built smart cities, and a stamp of progress across the country’s metal road network was made to flee from cities without any help and on top of it, a Chief Minister treating them as pathogens even sprayed them with sanitizing chemicals as a condition to any further mobility.

These citizens of India have been given rights to the free passage under Article 19 of the Constitution and also protected against starvation, death, disease, and abusive action by government authorities under Article 21. Yet it was all done against a vulnerable poor with disproportionate power against the State.

Jurisprudential evidence depicting the stark reality of legal abuse of vulnerable sections by States is enormous. NATO bombed Yugoslavia in the early morning of 23rd April 1999 in response to the conflict in the Kosovo region of Serbia. The bombing killed 16 people in the radio and television station, Radio Televizije Srbije (RTS) in Belgrade.

The court dismissed their claim by taking an extremely narrow and limited recourse to a pre-colonial law which segregated between  ‘insiders’ and ‘outsiders’ rather than adopting the true spirit  defined in The Convention for the Protection of Human Rights and Freedoms, more commonly known as the European Convention of Human Rights, which explicitly states in its Preamble that one of its purposes is to “take the first steps for the collective enforcement of certain rights stated in the Universal Declaration.”

This is one of the most misconstrued and egregious cases in the history of humanitarian law but on the other hand, just a few years later this court actually evolved to match the spirit of human rights.

Soon after, a group of citizens approached the same European Commission under the same Article 2 of the European Convention to allege that the State failed in its responsibility to provide them protection against natural hazards that caused deaths in Tyrnauz during July 2000.

The court, in addressing this case of Budayeva vs Russia 2008, turned to State failure, first in maintaining mud-protection engineering facilities, notably to restore the mud-retention dam damaged in 1999 and to clear the mud-retention collector blocked by the leftover debris, secondly, in maintaining a public warning (or Early Warning System) about the approaching disaster that would help to avoid casualties, injuries, and mass panic.

In contrast to the previously referred Bankovic case, the court ordered that the respondent State is to pay the applicants, within three months from the date on which the judgment becomes final in accordance with Article 44 § 2 of the Convention, the following amounts, to be converted into Russian roubles at the rate applicable at the date of settlement, in respect of non-pecuniary damage, plus any tax that may be chargeable on these amounts:

(iii) EUR 10,000 (ten thousand euros) to each of the third, the fourth, the fifth, and the sixth applicants;

(iv) that from the expiry of the above-mentioned three months until settlement simple interest shall be payable on the above amounts at a rate equal to the marginal lending rate of the European Central Bank during the default period plus three percentage points;

The origin of humanitarian and human rights law tells a touching mission of humans with higher than normal sensitivity towards life. During the mid-nineteenth century, Europe’s two goriest battles of Solferino (1859) and the Crimean War (1853-1856) the traditional aristocratic frame of the Army that always stood up to block humanitarian legal reforms gave way.

Both these wars were iconic failures in their planning strategies and in medical aid. An author of Russian history Alexis S. Troubetzkoy (2006) describes the Crimean War as ‘a notoriously incompetent international butchery’ by the French alliance with Ottoman Empire, the UK, and Sardinia against lone Russia.

The cause of the war was to protect Christian minorities in Palestine which were part of the Ottoman Empire. This deadly war led by Napoleon III provoked rules for the care of the vulnerable in wars. The two English nurses Florence Nightingale and Mary Seacole were described as great healers who left behind any best surgeon in care and treatment of wounded on the battlefield. The Solferino battle saw the same military alliance standing against the Austrian army which abandoned its position by afternoon as the haunted battlefield was strewn with 6,000 dead and 40,000 injured crying for help which was nowhere possible.

Henry Dunant’s account as a war reporter shocked the conscience of the civilized world but it was this account that launched (i) the International Committee of Red Cross and Red Crescent Society (ii) the creation of humanitarian law to protect the vulnerable due to wars or human calamities. The Geneva Conventions also grew from a minimalist to broader terrain starting with the first in 1864 for military victims of warfare to the second in 1899 for wounded and sick in sea warfare, in 1929 on prisoners of war, in 1949 on war victims, combined with Protocols additional to Geneva Conventions in 1977.

While both the International Humanitarian Law (IHL) and the Human Rights Law (HRL) prescribe to the protection of life, health, and dignity to human beings, the former focuses on obligations of the State towards war victims but the latter indicates those primordial rights inherent in human beings that define and limit boundaries of State power. It is believed that the two are complementary as HRL does not stop during wars nor does IHL turn away when other warlike devastating disasters occur.

The identification of the vulnerable and their vulnerabilities increases with evolving human sensitivity as that which started with wounded soldiers today extends to enemy spies and victims of civil wars, racism, and religious minorities.

As the dust of ignorance and biases gradually gets wiped off, the same civilizations, which killed and persecuted lepers, women, slaves, Blacks, disabled, and atheists, become human rights campaigners. Since sensitivity is a constantly evolving domain of humanity, it is likely to evolve further and discover more areas of abuse and cruelty to be prohibited by law.

Notwithstanding the Non-Human Rights Project, which had petitioned before the US Supreme Court on rights of animals against their encaging, abuse, and experimentation, Justice Barbara Jaffe of the Manhattan Supreme Court even granted a writ of habeas corpus on behalf of two non-human plaintiffs, Hercules and Leo – chimpanzees used for medical experiments at Stony Brook University on Long Island. Several rulings from Indian courts have acknowledged the rights of pet and homeless stray animals.

Courts in India have bestowed rights to even rivers and trees notwithstanding eyes which shut on sobbing and screaming hens transported in stuffed cages, disrobed in markets like public rape of young girls. I cannot insist that law be made to reclaim hen’s legal protection against what I see as a crime as ‘this is my sensitivity, may not be yours’ but I retain my right to sustain my level of sensitivity that suggests co-existence, will set a direction for evolution in law.

Despite a nation with an embedded philosophy of Buddhism, Vaishnavism, and Jainism proscribing animal slaughter, brutality, and their enslavement, it took our Constitution three decades to add two austere words ‘compassion’ and ‘coexistence’ in Articles 48-A and 51-A and that too as mere suggestive guidelines, not as law. This reveals the inertia of the State towards ideals belonging to higher sensitivities in contrast to authority-driven diktats.

Why humanitarian law and, for that reason, why women’s law, environmental law, or law for the differently-abled? Under what law would the State take note of the fact and also make houses for the 15% homeless human population (2011 census) with 4 lakh children and 8 crore dogs and cats on streets (Report of State of Pet Homelessness Index 2020) shivering in freezing temperatures and enduring rains and winds in the open.

Their death is also insignificant to governments. In 2020, except for Delhi, Maharashtra, and Kerala, those 16 States with 40% homeless made no mention of them on the contrary have forcefully evicted more than 2,60,000 people with homes in 2017 alone for city beautification and infrastructural development projects. The 2022 World Inequality Report uncovers how global inequality has been exacerbated due to the Covid-19 pandemic in which the top 1% took 38% of all additional wealth accumulated since 1995 with an acceleration in 2020.

This article was first published in The Daily Guardian Why we need humanitarian law in disaster management on January 20, 2022.

Read another piece by the author on The Capacity to Govern in IMPRI Insights.

Read another piece by the author on Judicial Oversight of Executive Actions and Governance in IMPRI Insights.

Read another piece by the author on Democratic deficits and disaster management in IMPRI Insights.