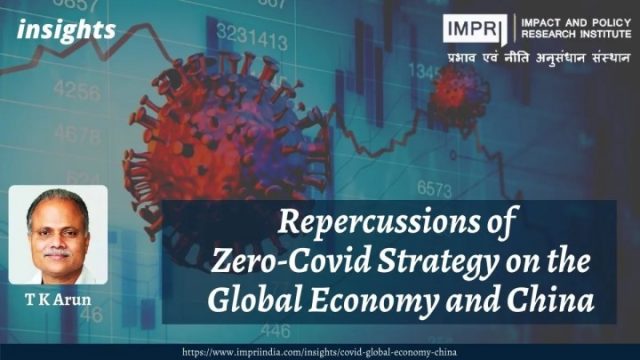 China is now the biggest potential source of global economic instability, thanks to mulish persistence with the zero-Covid strategy favored by its authoritarian leadership. This potential instability also manifests the contradiction between centralized decision­making and a capitalist economy with its inherent need for a political system that enables myriad, decentralized economic decisions.

China’s growth in 2021 is estimated to clock in at 8. 1 %, but growth in the last quarter would be only half that rate, thanks to Covid lockdowns, along with problems in real estate, aggravated by Evergrande, the world’s largest real estate firm that is struggling to bear its burden of debt, the servicing of which has been made tough by sudden limits on fresh borrowing imposed by the Chinese authorities, who chose not to let companies with high leverage like Evergrande have the luxury of time to switch out of their debt-fuelled growth strategy. China’s trade surplus grew to an unprecedented level of$676 billion, driven by exports of$3. 36 trillion in 2021, as the rich world, emerging from pandemic-induced austerity and home confinement, splurges.

They are still too scared to indulge their passion for contact-intensive services like travel and eating out. That means the spending is concentrated on goods. The goods come, in their final assembled form, from China to a very large extent.
So, what will happen if China shuts down entire cities or provinces, to contain an outbreak of Covid, as it has been doing since that initial outbreak early on in 2020? The strategy has been successful, even if disruptive. But with a variant like Omicron, with its high capacity to spread its special brand of cheer, the containment strategy could lead to shutting down large swathes of production that the world depends on.
When Wuhan shut down after the virus was first detected there, car manufacture halted in South Korea and Japan, as their plants depended on some parts from Wuhan. In the initial days, the talk was rife with abandoning the ‘just in time’ model of supply logistics to prepare for just in case. But, then, regions in the West also shut down, to fight the virus, even as China began to get back to work.

The talk of diversifying supply chains away from China became just talk.
So, why is China not learning from the experience of the world and learning to live with the virus, instead of trying to kill it off, wherever it raises its head? Even island nations such as Australia and New Zealand have abandoned their zero-Covid strategy. Because that would mean a loss of face for China’s Great Helmsman Jr, Xi Jinping.
It is not just that the authorities would have to admit that the strategy they have been following, and for which they have imposed tremendous pain on the Chinese people, shutting down cities with virtually no notice, was wrong; they would have to admit that China’s Covid vaccines
are not all that effective.
To live with the virus, the populace must acquire herd immunity. For that, you have two choices. One, let everyone get infected, treat the very ill as much as your systemic capacity allows and cull the weak.

Two, vaccinate the populace. For that, you need an effective vaccine. If China had to import vaccines from Pfizer or Modema, or even the AstraZeneca one from America’s anglophone ally, Britain, that would show Chinese weakness. To import vaccines from India would be unthinkable humiliation.
That leaves the option of containing any outbreak with authoritarian zeal, counting on people’s implicit trust in the wisdom of the Communist Party and its ‘thoughtful leader. To admit mistakes in strategy is to lose that implicit trust.

The Chinese always thought Mikhail Gorbachev’s policy of Glasnost (openness) was completely crazy and the reason for the collapse of the Soviet Union.
Millions of people have perished in the Soviet Union and China, thanks to their Communist dictators’ policy foibles and authoritarian excesses.
The metaphorical and literal skeletons keep popping out of newly discovered mass graves even today in Russia. China is careful to uncover only evidence of past glory, whether it is the world’s oldest rice cultivation in Zhejiang (south of Shanghai) or terracotta warriors in Xian.
Socialism with Chinese characteristics is red-toothed capitalism in sheep’s clothing. Capitalist economies adopt, sooner or later, formal democracy, which allows for decentralized decision-making and the appearance of individual liberty and equality before the law. Creative destruction, the lifeblood of capitalism, cannot flow with its torrid force when all economic decisions are as per state guidance.
Capitalism flourished under authoritarian regimes, true, in Germany, Italy, Indonesia, Korea, Brazil, and Chile. But, after a point, the contradiction between animal spirits and the urge of authoritarian regimes to tame them broke the regimes.
China thinks it will prove an exception. It thinks slogans of common prosperity will legitimize the regime. The pandemic illustrates the fallacy of this make-believe.

First published in The Economic Times View: An authoritarian Zero-COVID strategy could disrupt the global economy and China on 18 January 2022.