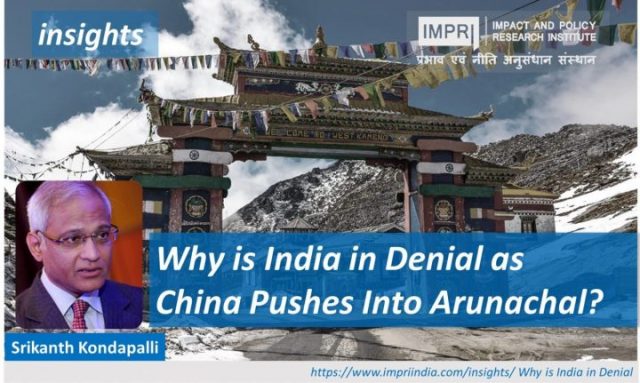 Since July 2017, China has been aiming to set up 628 ‘well-off’ society villages all across Tibet border areas.

The recent controversy about China building a “well-off society village” at Longju in Arunachal Pradesh has all the elements of opening another armed front to India, already straddled with the Ladakh-Aksai Chin stand-off since last year.

However, despite interest differentials between the Ministry of External Affairs spokesman’s position and that of the Chief of Defence Staff comments on territorial dispute resolution and the Line of Actual Control (LAC), respectively, there has been no response from the government.

China has been stepping up its infrastructure development in areas where previously, border transgressions were reported frequently. While both troops clashed at Tuting in 1975, killing four Indian soldiers, the Samdurong Chu stand-off took years to resolve. Longju, Asaphila, Migyitun, Namka Chu, Chantze and other areas in Arunachal have witnessed frequent border transgressions since the late 1990s.

Recently, China upped the ante by building “defence villages” in the border areas. In 2005, ten political parameters were announced to resolve the territorial dispute between India and China. One of these parameters is that populated areas should not be disturbed. Since then, not only did China begin mentioning Arunachal Pradesh as “southern Tibet” in its documents, but also gradually began constructing settlements to reinforce its claims in the region.

By late 2020, it was announced that over 600 such villages were already constructed, with at least one Communist Party cadre, surveillance systems, telecommunications, border defence duties and other facilities for border domination. It indicates their goal of border domination.

The Villages Are Given Highest Level of Legitimacy

These are comprehensive party-state backed units with long-term consequences to regional security, economy and environment. The highest level of legitimacy was provided to such actions, with President Xi Jinping visiting Tibet (and Nyingchi, which is a few kilometres north of Arunachal Pradesh) on July 21-23; as many as 11 out of the 15 existing Politburo members of the Communist Party visited Tibet in the last few months. There is a clear political and military escalation by China on this issue.

Large-scale Han migration and ethnic change through forced marriages with locals (reported on a large scale in Xinjiang) are expected in the near future, with massive demographic consequences in the border areas with India, all in the bid to achieve terrain and demographic advantage over India.

By doing so, China is also deliberately changing the borders and firming up its position in case of any eventual resolution of the territorial dispute with India. The 23 October passing of the Land Border Law by China’s National People’s Congress adds fuel to fire on the borders with India.

Soon after getting an extension at the 19th Communist Party congress in 2017, Xi wrote a letter to Yume village herders (which is 30 km north of Asaphila in Arunachal Pradesh). This came in the wake of the resolution of the Doklam crisis. In his letter to Drolkar and Yangzom on 28 October, Xi said, “Without peace in the territory, there will be no peaceful lives for millions of families. [I] hope you will motivate more herders to set down roots in the border area like galsang flowers, and become guardians of the Chinese territory and constructors of a happy hometown.” Yangzom was later chosen by the Communist Party as a “model” at its 100th anniversary on 1 July this year.

Subsequently, China built a village at Metok, bordering the Upper Subansari district in Arunachal Pradesh, where it also intends to build one of the largest hydroelectricity dams in the world across the Yarlong Zangbo river, which becomes the Brahmaputra. Metok is connected to Nyingchi by a highway that was constructed with over $300 million.

Plans for PoK, Too

A land-hungry China even disregarded its own 1961 treaty with Nepal and demolished border markers in several border areas such as at Humla, Darchula, Daulkha, Gorkha, Rasuwa and other places. According to recent reports, China is planning to set up such “well-off villages” in Pakistan-occupied Kashmir as well.

That China is making a concerted effort to expand is also seen in terms of the logistic networks and military build-up. The highways G219, G318, G214, G314 and others provide China with the ability to induct 12 to 15 divisions, while the 15 airfields and heliports could be used for tactical deployments and bombing missions.

Such party-army outposts at South Asian gates provide China with new tools to cross the Himalayan barriers, even as it pumps financial resources to create indebted nations and attempts at regime changes in the region. India then needs to not only upgrade its military capabilities, but also reach out to affected South Asian countries to oppose such hegemonic forays of China.

Read at: The Quint | Opinion | Why is India in Denial as China Pushes Into Arunachal? | Srikanth Kondapalli | 23 Nov 2021