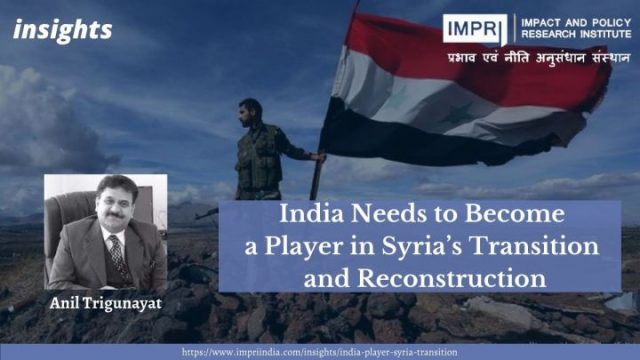 For over a decade now Syria has suffered insidious external interventions, civil war, bombings, and repeated attempts to undermine its sovereignty.

The Levantine nation has been targeted with the influx of ISIS (Daesh), and by a blatant regime change agenda, crippling sanctions, with an apathetic international community, at best, looking the other way. Syria, as it is evident has been at the center of intense geopolitical contestations. The cumulative impact of these conditions has been paid to ordinary Syrian people, who have faced enormous misery and suffering.

It is therefore not surprising that millions of Syrians have suffered in the bargain and have become refugees in Turkey, Jordan, Lebanon, and elsewhere. The Syrian economy is in a mess with the pandemic adding to this proud nation’s misery. Under these negative circumstances, Syrian fighters have been turned into mercenaries in foreign battlefields like Libya and Caucasus, especially the  Nagorno conflict, by their handlers.

To put some context to the Syrian predicament, it is important to understand that while the Arab Spring engineered the ouster of some well-entrenched despots and dictators, it also provided fertile ground for regional and international powers to effect regime change in many theatres.

In Libya, after Muammar Ghaddafi was ousted, Damascus and Bashar al Assad, Syria’s head of state, became the convenient and natural target.

Regime change was looming on the horizon, but the ground situation fundamentally changed, thanks to Russian pro-activism. Learning their lessons from the Libyan fiasco, the Russians refused to be shortchanged yet again by the US and western designs. Hence, they rushed to the rescue of their Syrian friend and to protect their own strategic assets including the only naval base in Syria and the Middle East.

Consequently, the situation is changing for the better in Syria. There has been a change of heart and regional powers, accepting the new reality, have begun to show greater and positive interest in Syria. A serious attempt is therefore underway, to bring back Syria into the Arab fold. Iran might be a factor, but geo-economics and reconstruction opportunities have provided equal if not greater weightage in their calculations to engage with Damascus.

For instance, the United Arab Emirates (UAE) has begun to shift gears deftly in its foreign policy objectives and style. It was the first one to normalize relations with Tel Aviv under the aegis of Abraham Accords. The UAEs pragmatic leadership maintains good relations with Iran too, which has significant influence in Damascus and has been a key player in protecting Assad.

The UAE has a military alliance with Saudi Arabia and has close relations with the US, Russia, and China. Even with Turkey, a thaw is evident, and the divide with neighboring Qatar is being bridged.

In fact, Crown Prince Sheikh Mohammed bin Zayed‘s visit to Ankara affirms an effort for a modus vivendi to establish less combustible regional power equations. Conspiracy theorists might even attribute it as the US clandestine design to undercut Moscow and Tehran although the UAE outreach to Syria has overtly not been welcomed by the Americans.

While Abu Dhabi had re-established its diplomatic missions in Damascus some time ago and has clearly expressed its desire to help in the reconstruction of the country that has been going through a really rough phase, the visit of the Emirati Foreign Minister Sheikh Abdullah bin Zayed bin al Nahyan along with a delegation, and his direct interaction with President Assad was significant, and a step in the right direction.

In fact, UAE’s outreach might open a new chapter, in fact, might even open newer geo-strategic contests as the Assad government reenters the Arab fold. As such, we are witnessing the winds of change and accommodation in West Asia as the regional players are hoping to work out some viable working methods and high-level engagements to avert further crises.

Even if the much-desired regional security architecture is currently elusive, its need is being increasingly felt as it is perceived that the US after the developments in Afghanistan has entered into a withdrawal mode. This perception persists despite assurances by US Defence Secretary Lloyd Austin at the Manama Dialogue, that Washington stands committed to the security and stability of the Middle East.

Meanwhile, even Iran has welcomed this rapprochement between the Gulf countries and the Assad government as Tehran itself is working to ease out tensions with Arab countries, including Saudi Arabia with the help of Iraq and rejoining the stalled Joint Comprehensive Plan of Action (JCPOA) nuclear talks later this month. Saudi Arabia, UAE, and Israel have been strong opponents of Obama’s concessions and the nuclear deal with Tehran and remain concerned with the continued resolve of the Biden Administration to return to talks.

They had found some respite in Trump’s heavy-handed approach towards Iran and the dumping of the deal altogether with accompanying sanctions. But Iran weathered it wisely by maintaining strategic patience hoping for Democrats to take over. The indirect talks with the US and E3+1 are expected to resume on November 29 under a new team of negotiators appointed by the new Iranian President, Ebrahim Raisi.

As the discussions to invite Syria back into the Arab league fructify, Abu Dhabi might try to persuade Riyadh to take a lenient view in a larger security context, where the equanimous US could look at this beyond the Caesar’s Act compulsions. On the other, Israel keeps bombing select Hezbollah targets into Syria perhaps with the connivance of the Russians in the larger ambit of counter and anti-terrorism initiatives.

For the Syrians, the Golan Heights and Trump’s legitimization that it is part of Israel will remain a sticking point. Under this circumstance, Damascus may try to use its newfound leverage with the UAE, to influence Tel Aviv. Of course, there are limits to Syria’s maneuvers, as Damascus is unlikely to abdicate its special ties with Tehran and that may not even be necessary if the JCPOA is revived.

Naftali Bennet, Israeli PM, had recently met President Putin in Moscow. Turkey has also recently decided to take a less sanguine approach towards Kurds and Syria and will discuss the same with Emirati leaders too which might create some template of acceptable assurances for Turkish interests. Russia is expected to continue to wield much greater influence in Syria and the region, and nearly all regional actors acknowledge this fact.

As for Syrian reconstruction, which according to some estimates could cost over $300-400 bn ought to be geared up in a manner that socio-economic inequities that led to conflict in the first place are avoided by keeping out the preferred vendors and crony businessmen closer to the government. Otherwise, more of the same will follow.

China is another power looking to partake in reconstruction efforts but also within its BRI expanse. As such, in the economic domain, its footprint from Iran to Israel is inimitable and extensive and, in the post, pandemic era, it surely intends to deepen its engagement with the region that might intensify with Beijing’s ensuing geostrategic competition with Washington. As usual, the pendulum of hope and despair, and uncertainty take a wild swing in the region. Many balls are in the air and several permutations and combinations are possible. Yet, a transition in the region is perceptible and various actors are lining up to shape the change.

India, which has maintained good and historic ties with Syria and has taken a rational approach towards the Assad government needs to buckle up, amid strong undercurrents that some semblance of stability in the region and in Syria may be about to dawn. Given New Delhi’s excellent relations with GCC countries, India could strive to become a partner in Syrian revival and reconstruction in direct, bilateral, and trilateral formats.

First Published in India Narrative India needs to become a player in Syria’s transition and reconstruction on November 25, 2021.