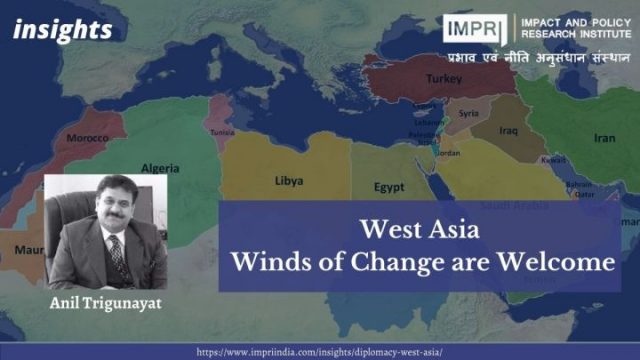 Geopolitics is the art of the possible as they say there are no permanent friends or enemies but only interests. But in today’s fast-changing global and regional dynamic especially in the volatile West Asia which is still nursing the impact of Arab Spring, economic downturn, and pandemic apart from festering hotspots, the US, that had been the arbiter of security in the region, does not seem to inspire the same confidence among the major players in the region.

While their geopolitical, geo-economic, and geo religious contestations especially that of Iran, Israel, Qatar, Saudi Arabia, and Turkey remain distrustful and at crossroads, the US’s refocus and potential disinterest in the ongoing forever wars has made them sit up and ruminate if they could find some modus Vivendi with their regional brethren.  Other options with China and Russia are no doubt being explored but they will be predicated on the outcome of the threat and evolution of the Sino-US Cold war.

We witnessed ongoing efforts to reduce tensions between Riyadh and Tehran with the help of Baghdad; forging of Abraham Accords geared to bridge the divide between Israel and the Arab states and success of it in a short one year;  al Ula Summit that put an end to the rift between Qatar and the Quad led by Saudi Arabia; even Palestinians and Israelis are talking.

UAE is taking the lead to welcome Syria and  Bashar Al Assad into the Arabic embrace; Turkey reaching out to Saudi Arabia and Egypt; some understanding that unwinnable wars in Yemen, Syria, and Libya need to end;  Challenges emanating out of Afghanistan and how to handle Taliban, ISIS, and AQ  in the changing landscape, etc. give some hope.

UAE which has an ambitious foreign policy roadmap has also been leading from the front be in rapprochement with Tehran, Ankara, or Damascus or for that matter with Tel Aviv pushing for the Abraham Accords during the Trump era. Turkey and UAE have been at loggerheads due to Ankara’s support to Muslim Brotherhood and Political Islam that has been an anathema to several GCC countries or monarchies in the region.

But there is a realization that continuing on the path of mutually destructive and diminishing strategies will only weaken them despite the fact that what happens in the medium and long term will be a challenge that will require innovative ideas. But in the short term being less confrontational helps.

The Landmark visit of UAE Crown prince Sheikh Mohammed bin Zayed bin Al Nahyan to meet President Erdogan in Ankara yielded a positive outcome for short-term stability in the region and possibly in the Mediterranean. The two sides signed two agreements on cooperation in energy, technology, and investments. Sheikh Mohammed tweeted “I look forward to exploring new cooperation opportunities to benefit our two nations and advance our mutual development goals “.

UAE announced the setting up of a $10 bn fund for investments in the health and energy sector and the development of marine ports. Turkish FM will follow up during his visit to Abu Dhabi soon. Turkey and Israel were on the same side of Azerbaijan in the recent Nagorno conflict. Even Tehran has recently signed some agreements with Baku.

UAE has also followed a pragmatic policy towards Tehran as significant interactions and  Iranian investments in UAE have been a reality. Iran is a power that needs to be reckoned with despite the spate of sanctions. The futility of conflict is evident as the Biden administration has expressed its desire to meet the Iranians halfway if they continue adherence and commitments to the JCPOA nuclear deal. Hopefully, the upcoming talks under the aegis of a new Iranian orthodox dispensation might be more productive.

Meanwhile, UAE’s Minister of State for foreign affairs Almarar and diplomatic Adviser to President Anwar Gargash received Iran’s chief negotiator and Dy FM Ali Baghreri Kani and the two sides emphasized the importance of strengthening ties based on good neighborliness and mutual respect. Kani may have reassured the Emiratis about Iran’s intent and extant of the nuclear program. These are good signs as dialogue leads the way for better understanding and eventual accommodation of interests.

But as was recently witnessed in the serious diplomatic rift between Saudi Arabia and Lebanon or unsavory developments between Algeria and Morocco over Western Sahara as Rabat signs a defense cooperation agreement with Tel Aviv and military coup in Sudan or for that matter recent naval skirmishes between US and Iran all attest to the challenges and difficulties can spiral out of control and that will keep cropping up but the trick is to reduce the fall out to the extent possible. And for this apart from mature leadership on all sides, some regional architecture might be necessary to address the legitimate grievances as the current institutions have just not lived up to the task and expectations.

First Published in The Indian Observer Trigs on Track- diplomacy Unwound-West Asia: Winds of Change are Welcome on November 26, 2021.