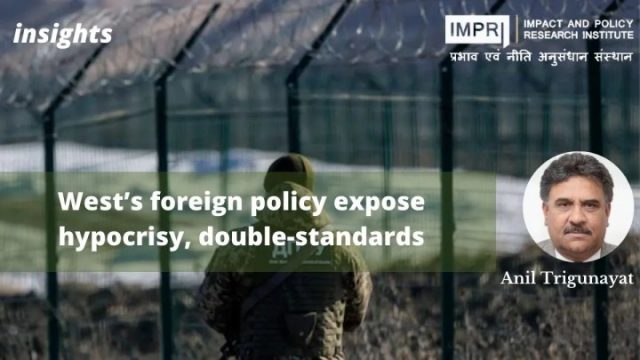 In 50 days of the Russia-Ukraine war, India has abstained 11 times from voting on resolutions on the issue at the United Nations. Explaining its abstentions on the resolutions, New Delhi took a principled approach that would serve its enlightened self-interest. At the end of the day, whatever the international relations theories may adduce, the fact remains that the fundamental objective of any foreign policy is to subserve its national interest in the best possible way in any given scenario.

In the ongoing crisis, India‘s main concern was to first evacuate its 20000 plus citizens from the war zone which it successfully did. This could only be done with the help of both the warring parties and neighboring countries given the ground reality and prevailing uncertainty. India has been enjoying a trusted special and privileged strategic partnership with Russia and has also adroitly developed a global comprehensive strategic partnership with the United States – much to the discomfort of both.

India’s vote was for peace through cessation of hostilities, reverting to dialogue, diplomacy, respect for United Nations Charter, sovereignty, and territorial integrity without condemning Russia that had abdicated diplomacy too soon and launched the invasion (military operation) to settle scores with Ukrainian President Volodymyr Zelenskyy, who was dancing to the tunes of Uncle Sam.

But in Moscow’s assessment, as was evident during the televised discussion between Russian President Vladimir Putin and his Foreign Minister Sergey Lavrov, diplomacy and talks were futile and were only buying time for an increasingly hostile narrative created by Kyiv at the behest of Americans for whom coaxing Russia into an intractable war would significantly reduce its firepower and international standing and pretense of being a superpower.

It would weaken Putin financially and economically under the heavyweight of unprecedented sanctions that would create domestic discontent against him and his eventual exit. Hence, indirectly the key objective of both Russia and the US were and are regime change in Kyiv and Moscow respectively. Biden’s slip of tongue averred to that. Both sides dumped diplomacy and resorted to conflict without realizing the extent of damage it will do to both and the larger transitional and already stressed global order.

India’s neighborhood first policy, including with Myanmar, Bangladesh, Sri Lanka, Nepal, Maldives, and Afghanistan, which are going through difficulties, is predicated on developing non-reciprocal ties through extensive assistance catering to their development and in turn, they ensure containing the inimical activities like extremism and terrorism from their soil. Connectivity, especially within the contours of BIMSTEC and her Act East policy, India is working to help stabilize and encourage countries like Myanmar to return to democracy. There is a great difference between democracy and project democracy in the US and the West.

India was not dealing with Saints but Satans of geopolitics in which getting caught would be sacrificing the principles it has always stood for. While it has mostly opposed the external military intervention and regime change agendas of the superpowers it could not ignore the history of unjustified interventions by the US and the NATO through manufactured causes and twisted intelligence in Iraq, Libya, Syria, and Yemen, losing credibility for good. This was far more insidious. Hence, New Delhi’s position is driven by an honest assessment of the checkered history of the perpetrators. Sermons lacked soul and became disinformation warfare.

External Affairs Minister S Jaishankar’s “wide-ranging discussion” with UN Secretary-General Antonio Guterres on April 15 covered the global impact of the Russia-Ukraine conflict, “, especially on food and energy security”. “Implications for developing countries are serious,” tweeted Jaishankar. This is what India worries about. During the pandemic, India earned accolades for providing medicines and vaccines to the poorest and the richest countries around the world. Many countries hoarded vaccines, not for their own use, but for geopolitical gains. This time around also Africa, Latin America, and a very large number of Asian countries are not part of the unilateral US and European sanctions against Russia, because they are illegitimate and are in violation of international law.

Many European countries including Germany and France have prevailed on the US to not sanction the oil and energy imports despite their so-called principled opposition to Moscow. When Washington comments on India sourcing energy supplies from Russia at a discounted price, they tend to threaten it with secondary sanctions. So, if all countries across the spectrum do follow their national interests first, what is the need for hypocrisy and double standards?

New Delhi realizes that the impact of this war, especially on fuel, food, and fertilizer prices, will have a devastating impact on the economy emerging from the impact of the pandemic. Hence, the priority was to be an honest interlocutor and use its brownie points with Putin to de-escalate and revert to dialogue and diplomacy. Prime Minister Narendra Modi spoke to Zelenskyy and Putin a couple of times. But frankly, this war is not between Kyiv and Moscow- its undercurrents are coming from the Potomac. Hence, the early resolution is going to be very difficult.

In a situation like this, while India plays the role of peacemaker to the extent possible, it must guard her national interest and stunt the adverse impact on its domestic economy and citizens while preparing for the Cold war 2.0 which will have an alternate financial architecture as a major tool of continuous warfare. As India is averse to alliance systems, it could have an opportunity to reignite the Nations for Strategic Autonomy and lead them from the front. It is evident that many countries including rich gulf countries hate diktats from the superpowers and would like to fight this kind of neo-colonialism and ‘My way or Highway’ dictum.

India, the largest democracy, second-largest market and population, and IT and knowledge power, with credible deterrence capabilities has the right credentials once again to fight for the cause and enlightened principles of international governance.

Read more on the Russia-Ukraine conflict by Anil Trigunyat, Fall out of Russia Ukraine War- An Alternative Financial Architecture waiting in the Pipeline, in IMPRI Insights