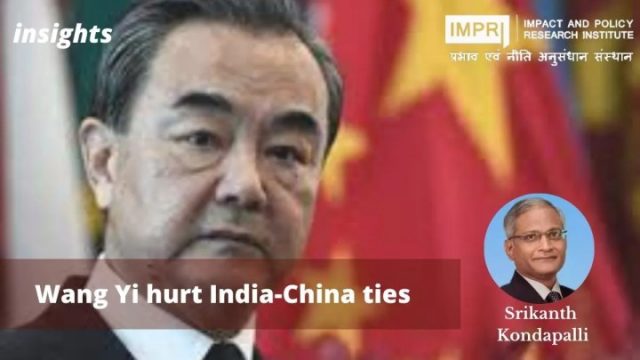 China’s Foreign Minister Wang Yi’s unheralded visit to India on March 25, amidst the continuing stalemate in Russia’s war on Ukraine and the continuing India-China stand-off in Ladakh, had raised many an eyebrow on the timing, motives, content, and outcome of Wang’s mission.

Firstly, China has been watching the unfolding situation in Ukraine, although its media is allowed to report only pro-Russia news. The two official Chinese news agencies have no reports on the Bucha massacre or any destruction by Russia. Official China is aware that the war is costing Russia heavily — the ban on banking transactions through SWIFT, the sanctions and the freezing of assets, Russia’s ouster from the UNHRC, and so on. It has made China think of the costs it might have to bear if it invades Taiwan.

China is heavily dependent on countries that are part of NATO for its economic and technological rejuvenation. So, alarm bells are ringing in Beijing. Some Chinese commentators such as Hu Wei have suggested that China should distance itself from Russia; others have argued that Beijing must protect Moscow from further decline, given the ramifications that would have for China’s own position in the global order. Any further decline of Russia or loss of political influence for Vladimir Putin would make China the next top target of the West.

Wang’s mission in this context was to nudge India to take anti-western positions through “multipolarity” debates while saving Beijing from becoming the focus of western sanctions. Given India’s neutral position in the UN debates, Beijing thought it could make a truck with New Delhi, offering its magic weapon of a “united front”. India clearly rejected the offer when External Affairs Minister S Jaishankar enumerated India’s national interests and strategic autonomy in Parliament.

Though India abstained from the UNSC resolution condemning Russia’s invasion of Ukraine, as well as in the UNHRC, New Delhi intended to approach Russia on the Ukraine matter directly, not in concert with China. Indeed, by meeting only the visiting Russian Foreign Minister Sergei Lavrov, Prime Minister Narendra Modi signaled India’s position clearly.

Secondly, China’s refusal to disengage and de-escalate militarily, despite 15 rounds of Corps Commanders’ meetings, has depleted any residual goodwill in India for China. China’s revisionist position of “meeting halfway”, or consolidating its intrusions through infrastructure projects, was stoutly rejected by India. Jaishankar, in fact, spoke of the “abnormal” state of affairs in bilateral relations.

The all-around destruction of several cities in Ukraine has had a sobering effect on warmongers in Beijing on the unpredictable nature and outcomes of modern war. China and India, which also have a large inventory of Soviet/Russian military equipment, deployed in the India-China border areas, are concerned about any military escalation. While Wang did not concede on the issue of troop/equipment de-escalation, the costs for China of military conflict with India are unnerving, given the Covid upsurge in many places in China and the preparations for the crucial 20th Communist Party congress later this year in Beijing.

Thirdly, by raising the Kashmir issue during his visit to attend the Organisation of Islamic Cooperation meeting in Islamabad just before coming to India, Wang intended to test waters in Delhi. As with China’s efforts to “discuss” Kashmir at the UN Security Council in 2019 and 2020, Wang’s ill-advised statement caused not only his India visit to fail, but New Delhi can put the ‘One China’ policy on the block.

Fourthly, Wang’s mission also included making sure that Modi attends the BRICS meeting in China later this year. With Putin attending the Beijing Winter Olympics, China’s appetite for such public events has increased.

However, unlike during the Doklam stand-off in August 2017, when Beijing made getting Modi to attend the Xiamen BRICS meeting its priority and was thus willing to resolve the stand-off, this time around, Wang made no commitment to military disengagement and de-escalation in Ladakh, although China had agreed to do so at “all friction points” as far back as February 10, 2021. National Security Adviser Ajit Doval also raised the border situation, but Wang had no positive mandate to deliver from Beijing.

Fifthly, India raised Afghanistan as a regional security issue in the Indian sub-continent and China’s machinations in propping up Pakistan and its own “Himalayan Quad” in the region. Clearly, while Beijing’s position in Afghanistan is to secure its own interests in curbing the Uighur insurgency, its efforts to balance against New Delhi have cost it India’s cooperation.

Thus, Wang’s ill-prepared, ill-advised, ill-timed, and badly executed visit to New Delhi – compounded by the emerging turmoil in Sri Lanka, Pakistan, and Nepal — actually ended up reducing China’s influence in the region, rather than enhancing it.

Read another piece on China titled China has taken the arms race to a different level in IMPRI Insights.

Read another piece on world emerging power titled Amid signs of Cold War 2.0, China ups ante to be recognized as world’s pre-eminent power in IMPRI Insights.