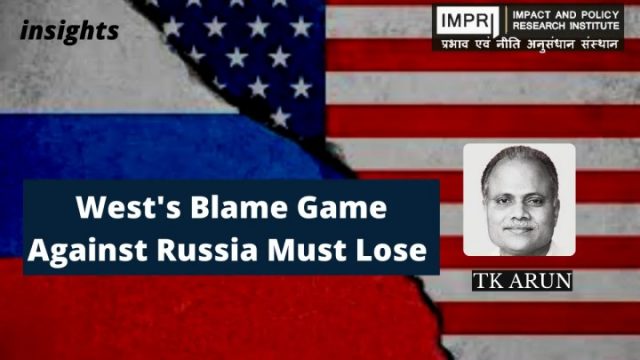 Russia, the largest exporter of wheat in the world, must be allowed to export its grain, to cool food prices and interest rates, and boost global growth.

Three things must be taken into account. One, Europe continues to be the biggest financier of Russia’s war effort, because European countries continue to buy Russian gas and Russian oil. Sure, they have decided to phase out purchases of Russian oil that are not delivered through a pipeline, but it is not easy for them to stop buying Russian gas in the near future.

Three things must be taken into account. One, Europe continues to be the biggest financier of Russia’s war effort, because European countries continue to buy Russian gas and Russian oil. Sure, they have decided to phase out purchases of Russian oil that are not delivered through a pipeline, but it is not easy for them to stop buying Russian gas in the near future.

There are serious limits on how much of Russian gas India or China can buy, even if they wanted to. Gas has to come through pipelines, or through LNG terminals. The pipelines in place are already pumping gas to China as much as they can. LNG capacity has been fully utilized, given the shortage of gas from the beginning of the last winter, long before the beginning of the war in Ukraine on February 24.

Fresh liquefaction plants, shipping terminals, regasification plants in importing nations, and LNG tankers, kitted out to transport liquefied gas at low temperatures and appropriate pressure, will have to be built, to transport extra gas without the help of pipelines. This will take time. Italy and Germany are dependent on Russian gas and continue to import large quantities from Russia, paying higher prices because of the spike in gas prices.

The second factor to be highlighted is that to the extent India and China buy Russian oil, they help stabilize global oil prices. If the average Joe in the US suddenly turns eloquent in a language register he did not pick up in Sunday school, whenever he takes his truck to the gas station to fuel up, it is useful to bear in mind that his decibel levels would be even higher if India and China did not buy Russian oil.

The third factor is the rising price of food. Inflation across the world is being fuelled by price increases in energy and food. Food prices have gone up essentially thanks to the Western boycott of Russian grain, sunflower oil, and fertilizer. But if you listened only to the BBC, you would think world food prices have gone up because the Russians have blocked the export of Ukrainian wheat.

Even if we concede the logic that Europe has to penalise Russia for its invasion of Ukraine, it would not justify the blockade of grain exports from Russia.

If Europe can continue to import oil and gas from Russia, even as they have imposed sanctions on Russia, why would they not allow the World Food Programme to import wheat from Russia? They blame Russia’s blockade of Ukraine’s Black Sea ports for the inability to export Ukrainian grain. In fact, Ukraine has mined the Odessa port to thwart Russian naval forces. Ukraine is certainly entitled to fortify its ports against external aggression.

The article was first published in MoneyControl as West must put aside its sanctimonious blame game, and exempt food from Russia sanctions on June 28, 2022.

Read another article by TK Arun- India Must Chase Glory, not Past Sins at IMPRI Insights

TK Arun is a Senior Journalist and Renowned Columnist