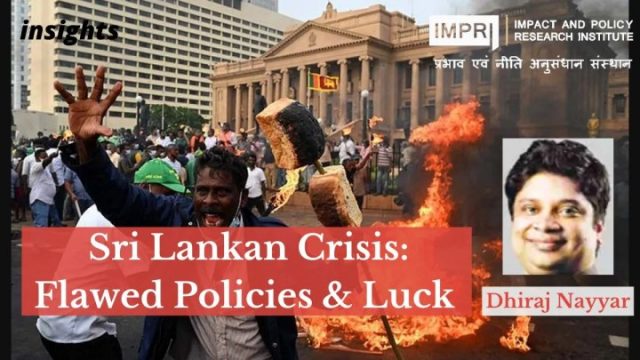 Every major global economic crisis is usually followed by more localised economic catastrophes with a time lag. A decade ago, after the global financial crisis of 2008, there was the collapse of the infamous ‘PIGS’ economies – Portugal, Italy, Greece and Spain – most notably of Greece that lost nearly half its pre-crisis GDP in a protracted sovereign debt morass.

Now, the aftermath of Covid and the Russia-Ukraine war has plunged Sri Lanka into a spectacular implosion. Others may follow. But is ascribing cause and effect to global factors absolving local leadership of blame? No. Crises are usually a Molotov cocktail of poor economic management and bad luck.

Consider India‘s own tryst with a near default in 1990-91. It had been preceded by a decade of fiscal profligacy and careless leverage. The steroid of debt-fuelled growth usually delivers positive short-term results. So, there is little incentive for policymakers to end the party until circumstances force it. In India’s case, it was the first Gulf War following Iraq’s invasion of Kuwait that precipitated the crisis. The massive rise in global oil prices following that event drove down India’s then-meagre foreign exchange reserves to a bare minimum. Fortunately, the political process staved off a default and ushered in reforms that created more sustainable growth, although after a period of pain.

The economic management of the Gotabaya Rajapaksa government in Sri Lanka has not been sound. It has been fiscally careless, offering too many freebies, beyond the earning capacity of the state. It has been lured by the promise of easy debt from overseas with no conditions attached, mostly from China. Unfortunately, there was no proper assessment of whether the investments made on the back of that debt would deliver the economic returns to pay back the interest and principal amount.

Building a magnificent airport in the south of the country (also Gotabaya and Mahinda Rajapaksas’ electoral base) may have been politically attractive, but without frequent traffic, it was an economic disaster. Then the government took the rash but faddish decision in 2021 to go entirely organic in agriculture without realising what that would mean for yields, production and supply.

But while all of those factors together may have been a drag on growth, they still may not have led to an implosion had external crises not hit. Covid destroyed the most robust and significant part of Sri Lanka’s economy – tourism, which accounted for around 35-40% of GDP. It also disrupted the smooth exports of the only other important driver of the economy – plantation commodities like tea and rubber. The dent to GDP but also forex reserves was bound to be severe.

Things may have still limped along had Russia not invaded Ukraine earlier this year. The escalation in global oil prices, combined with the shortage in supply and rise in prices of essential food items that followed the outbreak of war, were the final straw for Sri Lanka’s beleaguered economy. With acutely depleted forex reserves, the country could not afford to buy oil or, indeed, make up the domestic shortage of food via imports.

Food and fuel prices are fundamental to the stability of the macroeconomy. But their complete absence destroys the everyday lives of citizens. It is not surprising, therefore, that people are out in the streets in numbers ousting the incumbent regime from office.

What are the lessons from Sri Lanka’s crisis? The fundamental one is an old one: no country can afford to live beyond its means. But there are more. In cricket, it is often said that the batting side should look at the health of its current score by hypothetically adding two more wickets fallen. 120 for 3 may look comfortable, but 120 for 5 looks like trouble. Countries need to look at their fundamentals not just as they are, but what they might be if an external crisis hits.

A lot of the time, fiscal profligacy and debt-fuelled growth seem manageable. But it doesn’t account for an oil price shock, a pandemic or war. There is only a thin line between living on the edge and falling off the precipice. Also, countries must be wary of an economy based on one or two sectors alone. There is a need to diversify the economic base that would also help diversify risk should trouble arise. And, finally, while aatmanirbharta is much maligned by many economists, it makes sense to achieve as much of it as is possible, in food and energy, in particular.

In the end, you have to make some of your own luck and store it for the difficult times. Fortunately, India has done just that.

This article was first published in The Economic Times as Bad ‘nomics + Bad luck reasons behind Sri Lankan crisis on 12 July 2022.