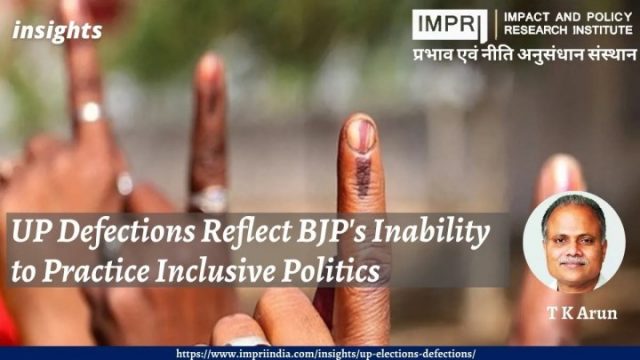 Governance, inclusive politics and broad based growth are vital for the lot of subaltern groups to improve, but the BJP has proved that it is programmatically incapable of inclusive growth in Uttar Pradesh (UP).

When you see rats scurrying hither and thither, all of a sudden, you know dedicated commitment to self-preservation motivates their hurry. That, in turn, tells you that there is danger in their former locations and that they probably spy safety in the place to which they flee. This has been the sum and substance of the commentary on the spate of defections, primarily from the BJP and to the Samajwadi Party, of political opportunists anointed, by themselves and colluding media, as champions of assorted backward castes in Uttar Pradesh.

In addition, taking their representative claim at face value, there has been the speculation that the coalition of non-Yadav backward castes that the BJP had built in 2017 has broken down and that the SP might be the one acquiring this subaltern solidarity. What more can we usefully infer from the pitter-patter of murine flight in Uttar Pradesh?

These leaders now deserting the BJP claim they realise that five years of saffron rule has not benefitted their backward communities and that this realisation has prompted their decision to exit the party. When they wake up to the sorry state of their communities just before fresh elections, it is hard to take their explanation at face value. But that does not mean that their contention that backward communities have not benefitted in the Yogi regime is false.

In fact, it is likely that neither backward nor forward communities have gained from ‘Yogi Raj’. If the government had been effective in improving the people’s lot, it is unlikely that this would have been left out of the BJP’s re-election campaign the way it has been. Sure, there have been perfunctory references to development and improvements in law and order, but the focus of the BJP campaign in Uttar Pradesh, so far, has been communal polarisation. The 80 per cent vs 20 per cent slogan is the most blatant piece of communal campaign a chief minister has resorted to, in recent memory.

Thok do (give it to them) has been chief minister Yogi’s mantra for improving law and order. The police have faithfully followed this advice. The result is illustrated by the CBI case against six policemen for the murder of a Kanpur businessman while staying at a Gorakhpur hotel. The cops had beaten the businessman to death, finds the CBI.

“I carry the kamandal in one hand and a bhala in the other,” remarked Yogi at a public event. Kamandal is the vessel in which holy men carry water. By Bhala, the Uttar Pradesh chief minister meant a spear. Not only he unhesitatingly mixes religion with his temporal job, but he is also eager to advertise his readiness to use coercive force against deemed opponents.

A clear beneficiary of the Yogi government has been the media. At a time of economic slowdown and a drought of commercial advertisements, the Yogi government has been munificent towards the media with an incessant flow of ads tom-tomming its supposed achievements. What this means is that the media will not go out of its way to report negative news on the government: after all, why risk turning off that spigot of scarce revenue?

But to give credit where it is due, Dainik Bhaskar did do those stories on dead bodies floating on the Ganga, of villagers declaring that they had no ‘Corona’ anywhere around them, although many were dying of cough and fever. But then, Bhaskar faced income tax raids subsequently — by sheer coincidence, of course.

The story of Dr Kafeel Khan exemplifies the quality of governance in Uttar Pradesh. Eighteen adults and 34 children died at the Baba Raghav Das Medical College hospital, Gorakhpur, in August 2017, on account of oxygen shortage. A paediatrician, Dr Kafeel Khan, who scrambled to procure oxygen cylinders, as the regular supplier had stopped deliveries, and saved several lives, was made the scapegoat, whereas the problem had been that the oxygen supplier had not been paid.

It was said the payment was not made because of disagreement over kickbacks. Dr Khan had been working for just one year at the hospital and was not responsible for making payments or other administrative functions. Those in a position to answer for why payments were delayed and oxygen supplies ran out were not questioned, the blame was put on this junior employee, who was sent to jail, suspended and finally sacked.

Governance failure was uniform. In the absence of functional governance, how do backward communities gain, even if their members become ministers and MLAs of the ruling party? In some special circumstances, even without any general improvement in governance, some subaltern groups can gain when their representatives wield state power.

When Lalu Yadav became chief minister the first time around, his government broke the stranglehold of the upper castes over the state machinery, particularly the police. This shook up the social structure of Bihar and gave voice to all sections of society. However, just acquiring voice does not go very far and the Lalu government had to be rejected by the people because of its consistent failure to deliver governance.

Mayawati, when she became chief minister of Uttar Pradesh, made sure that the police dropped their habitual disdain for Dalit complainants, and actually registered cases when approached on the numerous acts of oppression that Dalits suffered. Mayawati also carried out a bit of land reforms. The distribution of social power in Uttar Pradesh became slightly less unequal and iniquitous as a result.

This made a big difference. But the limits of this difference are marked out by the atrocities Dalits still routinely suffer in the state, where the social and economic structures have not changed enough to make the lives of the subaltern all that different from those of their forebears. A Dalit can be attacked for riding a horse on his wedding procession, for growing a moustache, for walking along the street in the upper caste quarter or for being uppity in general.

The BJP had been trying to build a coalition of non-Yadav backward castes in the run-up to the 2017 elections. Statues of backward caste leaders were put up, BJP leaders praised such leaders celebrated in folklore, Prime Minister Modi washed the feet of Valmikis, a Dalit caste, ahead of the last Kumbh Mela, and a Valmiki was roped in to be part of the ceremony to lay the foundation stone for the Ram temple at Ayodhya.

These acts of symbolic empowerment was important for these oppressed castes when they were performed. But unless there is a fundamental change in how society lives, societal values remain what they were and we have the rapes of Dalit women, such as at Unnao and at Hathras. At Hathras, the victim of rape and murder was cremated in the dead of the night by the district administration, with the police keeping even family members away from the site.

People gain from political empowerment of the citizenry, and not just of nominal representatives of particular communities, from broadbased economic growth, from access to education, healthcare and social security in general, from governance that lets people take law and order for granted and from inclusive politics. The Yogi government has delivered the exact opposite of all these requirements. The BJP is programmatically incapable of inclusive growth, committed as it is to making Muslims second class citizens, and to Brahminical values that sustain a hierarchical society.

The migration of backward caste champions from the BJP to the SP, whose record of favouring Yadavs and Muslims at the expense of other communities is bitterly remembered by many, shows the relevance of a political party that adopts the values of the Constitution as its own, and tries to build both democracy and an inclusive, integrated nation. If only such a party — and that means an organisation capable of organising political action, and not just of issuing statements — were visible somewhere on the horizon!

This article first appeared in The Federal UP defections reflect BJP’s inability to practise inclusive politics on January 16, 2022.