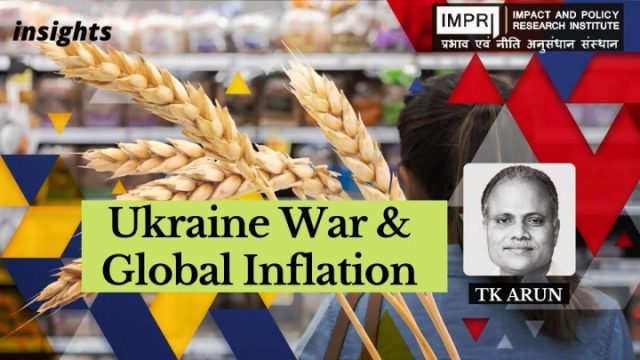 People are angry and distressed, pretty much across the world.

They are unhappy for their own specific set of reasons: fuel, food, and medicine shortage in Sri Lanka; near starvation in parts of Africa, and Afghanistan; heat waves in southern Europe; floods in parts of India, Afghanistan, and the United States’ Virginia; forest fires in Portugal, southwestern France, and Greece; an ultra-conservative Supreme Court’s undoing of what the American people had come to believe to be fundamental features of their life, such as a constitutional right to abortion and the right of states to restrict the use of guns; and, political turmoil in Pakistan, and Britain.

But a common feature, and one serving to add to the intensity of popular anger, has been inflation.

All of Latin America smarts under the effect of high prices. In the US, the Democrats expect to be skewered in the mid-term elections in November, on account of unrelenting inflation, which has touched a 41-year high. Inflation is in excess of 20 percent in the Balkans, in the double digits in eastern Europe, close to double digits in the EU as a whole. In Iran, anger against inflation fans the flames of anti-government protests, including one against the hijab.

Inflation is concentrated in energy and food, and spreads across the economy, via higher wage demands and higher wages, as well as through higher transport and production costs that push up prices. Generalised inflation forces central banks to raise interest rates. As a result, stock markets tumble, investment goes on vacation, and growth trails off, leading to slackened hiring and outright job losses, feeding the beast of popular anger.

Rate increases in the US, and a general sense of uncertainty make capital flee to the dollar from across the world — in particular, the emerging markets. The dollar has strengthened against most currencies. Depreciated currencies make debt servicing harder for those with external borrowings, make imports costlier, and widen the current account deficit; macroeconomic management becomes ever more difficult, feeding the vicious cycle of inflation, unrest, and political instability.

Is all this inevitable? Is the current bout of inflation a freak occurrence, like the unexpected transfer of an animal virus to the human species, where it acquires a virulence it had lacked when confined to its habitual host? It is not.

The reality is that the spike in food, fertiliser, edible oil, and energy prices is the product of a conscious geopolitical choice made by the West. It is commonplace to attribute the rise in food and energy prices to the Ukraine war. This is obfuscation. The West’s decision to sanction Russia, to ban its exports, is the real culprit.

Did the West have any alternative to punish Russia for its invasion of Ukraine, apart from these export bans that have caused a global surge in inflation, macroeconomic imbalance, political turmoil, and misery across the developing world?

Yes, it could have sent its soldiers to fight in Ukraine, to beat back the Russian invasion. War would create disruption of some kind, and send prices soaring for several commodities. The threat of nuclear warfighting would have triggered capital flight. But that disruption would have been short-lived. Neither side would want to prolong a confrontation that carries the risk of a nuclear spill over.

Would a war between NATO and Russia necessarily and immediately entail the use of nuclear weapons? Not at all. Each side has enough nuclear firepower to destroy the other several times over. The logic of mutually assured destruction kept the war between the West and Russia cold, till the collapse of the Soviet Union. Now, if there is an armed conflict between the two parties, the same logic would prevent resort to nuclear weapons by either side, even as conventional war turns more destructive, and more high-tech.

For all the Western propaganda of Russia targeting Ukrainian civilians, the reality is that Russia’s fighting has been calibrated to minimise civilian damage. Remember that video footage of brave Ukrainians standing in the path of advancing Russian tanks and making them turn away? The West celebrated it as a sign of Ukrainian bravery. So it was. But it also proved that the Russian tanks had not been instructed to roll over ordinary Ukrainians.

At the beginning of the war, Western strategic experts predicted the use of thermobaric bombs by Russia. These weapons create huge fireballs in the sky above the targeted towns, sucking up available oxygen and leaving the populace to die gasping for breath, like fish out of water. Russia has such weapons, but has not used them in Ukraine. Russia has not resorted to indiscriminate, mass bombing of Ukraine from the air the way the US had, in Vietnam, Laos, Iraq, and Afghanistan.

This is not because of any Russian magnanimity. Russian President Vladimir Putin cannot simultaneously claim that Ukrainians are historically and culturally Russian, and then proceed to bomb them to smithereens. That is not a development that the ordinary Russian would tolerate.

If NATO soldiers were to enter the fray, the technological quotient of the war would go up dramatically. Both sides would have an incentive to sue for peace and bring the war to an early end. The risk of nuclear confrontation would be more or less what it already is today. But the world at large would be spared the agony of sustained inflation, uncertainty, political turmoil, poverty, and suffering.

The war in Ukraine is a war between US-led allies and Russia, not a war over any principle of sovereignty or democracy. The same principle of sovereignty that the West cites was at play when the Soviet Union deployed its nuclear missiles in Cuba. Cuba was in US’ backyard, but in a sovereign nation. No one in the West then thought it fit to respect Cuba’s sovereign right to deploy missiles of an ally of its choice on its territory. How can the logic be all that different, when it comes to Ukraine joining NATO and deploying NATO missiles on its territory?

If it is a war between Russia and the West, why then does the West choose to make this a proxy war, with Ukraine doing the fighting on its behalf, while it arms and funds it, and penalises Russia by banning its exports, even if that also punishes the rest of the world?

The trade-off that would emerge if the West were to enter the fight directly is quite simple. It is between American and European lives lost on the warfront in Ukraine, and Third World lives lost in famine, hunger, disease, governance collapse, and economic distress, during a prolonged standoff in Ukraine.

This article was first published in Money Control as A trade-off between Western losses and developing world misery on 15 July 2022,