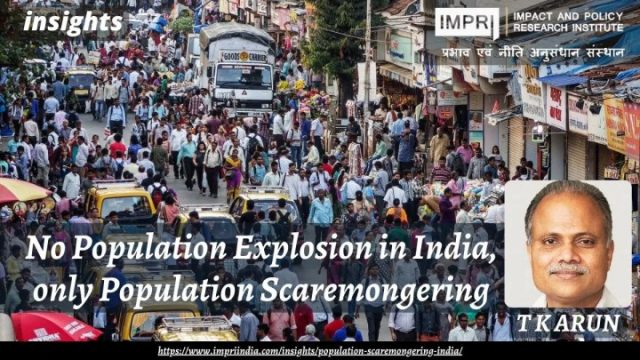 The publication of the United Nations’ World Population Prospects 2022 has served as an occasion for the display in India of much bigotry and ignorance by very many people who should know better.

The report posits that India would overtake China in population in 2023. This has given rise to dire warnings of a population explosion in India, and concerted exhortations to adopt stringent measures to curb population growth.

In the ideas sphere of the Sangh Parivar, the family of organisations that take ideological inspiration from the Rashtriya Swayamsevak Sangh, of which the BJP is a proud member, population explosion is code for the danger of Muslims outnumbering Hindus in India. The UN report’s release has been followed by shrill calls to rein in Muslim proliferation, forcing the BJP’s Muslim face, Mukhtar Abbas Naqvi, to say that the population explosion is a problem for the nation, and not of any particular community.

Let us get some things straight.

India’s population grew the fastest in the 1970s and the 1980s, when the annual growth rate of the population was around 2.3%. The growth rate has steadily declined, and struggles to reach 1% now. As India prospers, educational standards improve and more and more women acquire a degree of control over their own lives, the population growth rate would keep falling, and eventually turn negative.

When it reaches two, on average, each woman would replace two people of her generation with two new lives. Since every infant does not survive to adulthood, the average number of children per woman has to be a little higher than 2, for new births to replace eventual deaths of the mother and her reproductive partner. The replacement TFR is generally accepted as 2.1.

Some states such as Bihar, Uttar Pradesh, Jharkhand continue to have TFRs higher than 2.1, but in these places too, the trend is downward. This is a uniform trend from the First Family Health Survey (1992-93) onwards.

Socio-economic status and the degree of autonomy women seem to determine how many children they end up having, on average. It is not surprising that a poor state like Bihar has a fertility rate of 2.99, while the figure for Kerala is 1.8 and that for Goa, 1.3.

Let us look at the bugbear of the Hindu right, the supposedly exploding population of Muslims. Muslims at large have a relatively low socio-economic status, and their fertility rates are higher than those of Hindus. However, at 2.36, the Muslim average TFR is lower than that for Bihar (2.99) as a whole and on par with Uttar Pradesh’s 2.35.

In Kerala’s Muslim-majority Malappuram district, the TFR lagged the TFR of other districts, but has gone below the replacement level of 2.1. Bangladesh has a TFR well below 2.1, as has Iran and Turkey.

As India prospers, backward states like Bihar and Uttar Pradesh, and socioeconomically deprived communities like Muslims and the Scheduled Castes would also advance, and register ever lower TFRs.

The population would not begin to decline as soon as a society achieves a TFR below 2.1. Better healthcare and nutrition keep people alive longer. The youth bulge created before the TFR begins to decline would continue to reproduce. And, even if at a low rate for each woman member of that youth bulge, the size of that reproductive age group would keep the population growing, till they themselves grow old and fall by the wayside. The cohorts that come after them would be smaller than the numbers who pass on, making the population shrink.

Japan and several countries of Western Europe have gone through the transition. In Germany, a shrinking human population paved the way for the return of the wolf to that land. The US is one rich country that is insulated from the problem of a shrinking population because of the constant infusion of fresh blood via immigration.

Just because someone has prudently saved during their work-life, it does not automatically mean that their old age needs would be met. The saving represents a claim on the productive capacity of the economy, from which profits, dividends, interest payments and taxes are extracted. If there are not enough people to work that productive capacity, merely having made financial savings in the past would not protect a pensioner from a tough life.

This is why China abandoned its one-child policy and desperately seeks to persuade its citizens to have three children.

The challenge before India is not any population explosion, but in creating the human, physical and institutional capital that would raise productivity. Ruling party functionaries would do well to abandon futile projects such as conjuring up population dangers that do not exist or baring the fangs of regally serene ancient lions in their contemporary rendition, and focus their attention on this substantive challenge. That is the way to reap India’s demographic dividend.

This article was first published in The Federal as Population growth: Myths, realities and the deeper neglect.

Read another article by TK Arun- The Multiple Reasons for Inflation apart from the Ukraine war.

Read another article by TK Arun- Defections and Democracy in IMPRI insights.