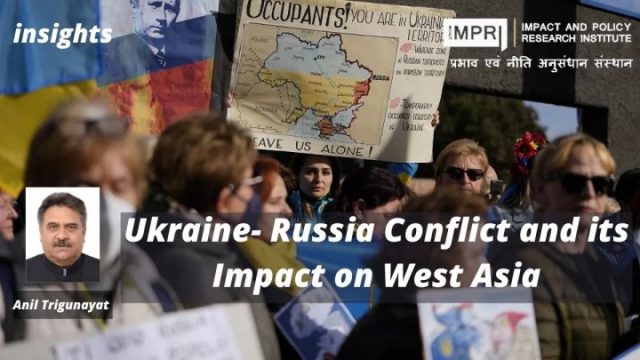 The Russia-Ukraine war has caused immense human suffering and a crisis of confidence in the current selective rule-based international order and its limits. Whatever the impact, the crippling and sweeping western sanctions may have eventually given salience to the desired objective to further weaken Vladimir Putin and Russia for a host of geopolitical and geo-economic reasons. President Biden’s personal choicest exhortations against his Russian counterpart smacked of the regime change agenda that his Secretary of State Antony Blinken tried to give a more diplomatic spin.

Even French President Emmanuel Macron was not too amused by these epithets against Putin since his efforts to ease the crisis get compromised and stunted in the bargain. Europeans despite having come closer to the US are still going to be in the first line of fire should things go extreme south let alone energy impediments.

This has surely caused a global credibility concern of the western dominated financial muscle and institutions which could be weaponized against anyone who does not fall in line. Russia may be immaterial only instantaneous in this but a larger question stare at the dark global disorder. This will compel the emergence of yet another competing financial architecture and bilateral arrangement from mutual currency trading to primitive yet sophisticated barter mechanisms.

Already many such arrangements and granular initiatives are evident. In the past dollar domination, despite the US having over 100 percent of debt nearly equivalent to its GDP, has prevailed and even any remote threat to it led to the removal of ambitious autocrats like Gaddafi who dreamt of a Gold Dinar. Even Euro is allowed to operate under the threshold and within the permissible matrix.

Since energy trade and food basket were the direct casualties of the war and sanction the currency of reference, the major Middle Eastern petrodollar habituated regimes have begun to look at political and economic alternatives especially towards and with China—the second-largest economy threatening to displace Comrade Biden from the numero uno position. Putin The Strongman fell for the bait even though he has been working to reduce the impact at least since his 2014 misadventure.

In the past seven decades, unilateral sanctions have been the favorite tool in various theatres of conflict provided it does not hit back at the originator or their allies. In addition, the appetite of the US for continuing as a reliable and genuine security guarantor has come under a lot of scrutiny by the leadership in West Asia despite Abraham Accords and the West Asia Economic Quad.

The Ukraine crisis has also brought up the regional fault lines as most of the regional powers did not appear convinced of the addictive argument by the West to condemn Russia for the Ukraine aggression. Their votes at various fora including the much talked about abstention by India, China, and the UAE at the United Nations Security Council (UNSC) clearly speaks volumes. Memories of manufactured crisis and invasions in Iraq, Syria, Libya, and Yemen are still fresh in their minds because some of them have been part of the game then understand the western modus-Operandi rather well

.Short-term assurances from the US remain inadequate to garner their loyalty once again. China and Russia and their own regional efforts at modus vivendi is being preferred. Moreover, they are concerned about the impact on their own economy and stability. No wonder they don’t want to get dragged beyond a point and have begun to diversify and minimize their exposures and risks. Even Qatar, the newest non-NATO ally sent its foreign minister to alleviate the Russian concerns. However, Doha has decided to hold back its fresh investments in Russia while enhancing supplies of gas to Europe.

It also enabled Zelensky to address its prestigious Doha Forum where he made a fervent pitch urging oil and gas producing countries to pump more to alleviate the impact on Europe. UAE and Saudi Arabian Crown Princes were not too eager to please President Biden hastily to a call. It is a fact that if Biden and Blinken make a call many leaders buckle under which is shown as support to their cause.

German Foreign Minister, while making calls to various leaders before the UN General Assembly vote, got the hang of it. Promises were advanced lest the desired narrative be lost. Among the West Asian countries, many maintained an ambivalent stand. Israeli Prime Minister Naftali Bennet tried to gauge the waters by visiting Putin. Turkey hosted the two foreign ministers and hoped for a meeting between the two principals, Putin and Zelensky to end the war. UAE and Saudi Arabia offered to host the talks and are urging for de-escalation, dialogue, and diplomacy as they chart out their own strategies in the post-war scenario.

Riyadh not only is discussing trading oil with Beijing in Yuan but has invited President Xi Jinping. UAE as such the closest partner of China in the region has currency swap arrangements with China. Although the JCPOA conclusion has been expedited as a result of this war Tehran remains as suspicious of the West as ever and is working with Moscow and Beijing for longish strategies. Houthis have offered a ceasefire after hitting targets in Saudi Arabia and UAE perhaps at the behest of Iranians.

Several regional meetings are being held to address the fallout of the ongoing war and to craft, strategies to reduce the impact as oil, gas, food, and fertilizer prices soar and impact most economies.US Secretary of State Blinken going around the region to assuage concerns of various partners including Israel as the Iran deal gets finalized. He met Palestinian leader Mahmoud Abbas in Ramallah and with his counterparts from Israel, UAE, Bahrain, Morocco, and Egypt at Negev were differences and concerns on JCPOA were evident.

Every effort is being made to keep the flock together but in many a case the Arab pride has been hurt and individual leaders’ position may be dictated by the way they read the fast-evolving situation keeping their own recent not-so-savory experiences with the Biden Administration. Especially the US’s continued adherence to the regime change agenda, once again displayed against Putin by non-other than Biden, scares them too. Hence the wait and watch approach on the outcome of the Ukraine crisis and regional developments will help them cast their lot in a nuanced manner, to begin with.

The cost-benefit analysis will be the underlying consideration. Meanwhile, India continues with her policy of abstention and adherence to the principles of de-escalation, dialogue, diplomacy, peace, and enlightened national interest. Amidst the spate of international leaders visiting and wooing India, she retains her focus on West Asia too as the energy crisis threatens to derail the economy

Although the visit of Israeli PM Naftali Bennet on April 2 along with their defense minister Benny Gantz and that of PM Modi to UAE and Kuwait were shelved due to the COVID-19, there is no doubt that India will continue to further enrich the bilateral ties in the regional context as it just signed the Comprehensive Economic Partnership Agreement with UAE, expediting FTA with Israel and joined the West Asian Economic Quad to leverage synergies to mutual advantage.