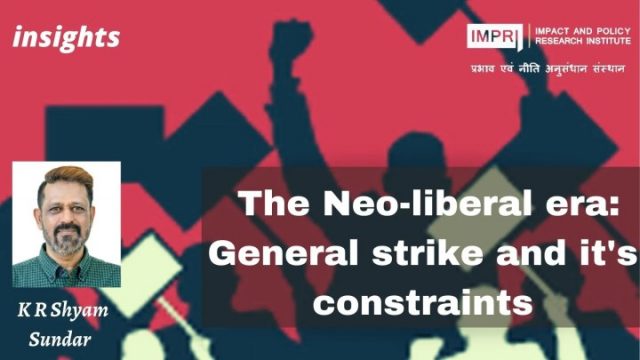 The challenge for trade unions is how to confront the giant and hard State. That is a greater challenge than organizing annual rituals.

Workers in the railways and the defense sector will stage protests supporting the general strike. The CTUs also expect participation by millions of unorganized workers like scheme-workers (such as aanganwadi workers), domestic workers, hawkers, beedi workers and construction workers, among others. As usual, the Bharatiya Mazdoor Sangh [BMS], affiliated with the Rashtriya Swayamsewak Sangh, will not participate in the strikes that it deems as “politically motivated just to ensure the survival of political parties”.

Political motivation can be seen by either side. The common agenda for strike includes 12 demands. These include scrapping the four labor codes; accepting the demands of the Samyukta Kisan Morcha; stopping privatization and the national monetization pipeline [MNP]; food and income support of Rs. 7,500 per month to non-income tax-paying households; increased allocation of the Mahatma Gandhi National Rural Employment Guarantee Act and extension of the employment guarantee scheme to urban areas; universal social security for all informal sector workers; statutory minimum wage and social security for aanganwadi, ASHA [Accredited Social Health Activists], mid-day meal and other scheme workers; increase in public investment in agriculture, education, health and other crucial public utilities by taxing the rich through wealth tax and other measures; substantial reduction in central excise duty on petroleum products and concrete remedial measure to arrest price rise; regularization of contract workers, scheme workers and equal pay for equal work for all; cancellation of the National Pension Scheme; and restoration of old pension and substantial increase in minimum pension under the Employees’ Pension Scheme.

At the sectoral level, the respective unions add their sectoral agenda – for example, the All India Bank Employees Association demands strengthening public sector banks [PSBs], halting the privatization of PSBs, and initiating the recovery of bad loans.

Recent adverse developments like rise in fuel and gas prices and reduction in Employees’ Provident Fund’s interest rate from 8.5 per cent to 8.1 per cent have angered the working class.

Effective enforcement of labor laws remains the core concern as even good laws concerning fundamental labor rights like the minimum wages do not get implemented.

Do these strikes matter?

Four actions are possible for trade unions to effect changes favoring workers’ interests, viz. social dialogue, legal action, political action, and direct action. As usual, the strike agenda is wide enough to encompass labor, economic and multi-sectoral issues. But the persistence of several of the demands like those concerning contract workers, scheme-based workers and labor law reforms reflects little gain for the striking workers over the decades on the one hand, and utter insensitivity on the part of governments of all hues on the other.

These national strikes are preceded and followed by several other forms of protest like morchas, conventions, and so on which neither interest the media nor the government. The relevance of these multiple actions is that they prepare the workers for the eventual big strike. But it is time that trade unions take stock of the impact of these actions.

Trade unions contend that direct action is the only possibility given the closure of dialogue fora like the Indian Labor Conference by the government. Whatever little dialogue that takes place is of nominal, even doubtful, value to the trade unions. Even the BMS has flogged the government on the social dialogue deficit issue.

It is averse to litigation as well. The judiciary is least likely to entertain litigations concerning government policy-related issues like privatization or MNP, as can be seen in its earlier decisions on disinvestment.

The CTUs are not able to make a strong legal case to challenge the four Labor Codes, notwithstanding their severe limitations. Trade unions suffer significantly from legal knowledge and assistance deficit. Then, they have to identify and work with legal minds that value social justice and workers’ welfare. Trade unions do not seem to have attempted even this possibility.

The political support option to trade unions has limited relevance as opposition parties are divided amongst themselves and are no match to the National Democratic Alliance government. For example, the All India Trinamool Congress government in West Bengal is against general strikes, which hurts the effects of strikes in the state. Then, these token strikes pitiably become annual rituals.

So far, 20 country-wide strikes of varying magnitudes have occurred since 1991. Strikes till 2014 kept national labor law and inspection reforms at bay, which by itself is a significant achievement.

Post-2014, the trade union movement has lost the battle as several regional governments have liberalized labor laws and inspections, and at the firm level, employers have been able to achieve substantial flexibility by employing contract workers, National Employability Enhancement Scheme (skilled) laborer’s and trainees, among others.

Now the workforce has already been significantly ‘gigged’. From ‘precariat’, it has become ‘gigariat’ (precarious + proletariat + gig), which means workers are moving away from the traditional employment relationship and outside the purview of labor laws, thanks to the liberalization of applicability of labor laws.

Therefore, trade unions need to come out with better actions than these annual exercises of protests.

Given the limited spatial involvement of farmers’ struggle, around 40-50 million farmers (arguably a guesstimate) might participate in the general strike. Around 77 million workers belong to the organized non-farm sector; we have to exclude employees in the public administration, defense and educational institutions, and art and entertainment as they are less likely to participate in the strike.

Some state governments like West Bengal have prohibited their employees from going on strike, while others like Haryana have imposed the Essential Services Maintenance Act, which restricts workers in the transport and electricity sectors from striking.

The construction sector employs around 56 million, and not many can be expected to participate in the strike. Further, the Centre for Monitoring Indian Economy, an economic think-tank, has been reporting higher levels of unemployment in both urban and rural labor markets numbering 50-55 million during the last quarter. These workers are less likely to participate.

Let us factor full-throated and widest participation including the entire 10 million scheme-based workers. Still, a realistic and even a generous guesstimate cannot exceed 100 million strikers.

Another way to look at the potential participation is to look at the CTUs’ membership data. We need to exclude BMS (17.1 million claimed membership) and another of the 12 CTUs. We cannot assume 100 per cent participation of all the union members. Hence, the potential strikers’ numbers cannot exceed 90-100 million – even if we include major regional unions like the Shiv Sena-affiliated Bharatiya Kamgar Sena and the Bharatiya Kisan Sangh. So, seen in any manner, the trade unions’ claims of 200 million strikers in the forthcoming strike appears to be fantastic.

Trade unions must reform their strategy

It is true that organized and unorganized workers are reeling under multiple blows in the labor market like rising and higher unemployment, inflation, social security cuts, pandemic-induced losses, and so on. The dominant ruling dispensation is not in a mood to listen to the trade unions, and neoliberalism is the dominant driver of public policies and labor laws. The government is not willing to exercise active labor market policies and direct benefit transfers.

But then, the challenge for trade unions is how to confront the giant and hard State. That is a greater challenge than organizing annual rituals.

Labor protests in forms like morchas, marches to the Parliament, holding conventions, gate level meetings and general strikes perform three important functions: creating and sustaining class consciousness, conveying to the society at large the labor problems, and signaling to the government the dissatisfaction with the state of affairs in the labor market.

What I wish to argue here is that sole and even dominant reliance on short but large sporadic direct actions will not alone enable the labor movement to secure its goals. It must build interfaces with a variety of stakeholders like the legal fraternity, intellectuals, and NGOs, among others, to explore complementary actions. On the other hand, trade unions must shed their political chains and work for the cause of the labor movement on either side. At the end of the day, they are contending with a strong and hard neo-liberal State, and they must exercise multiple and complementary strategies.

Labor welfare is social welfare and justice to labor is social justice. There cannot be a stronger normative basis than this lending sinews to the labor movement.

First published in Wire “Limitations of general strike in the neo-liberal era” on 28th March,2022.