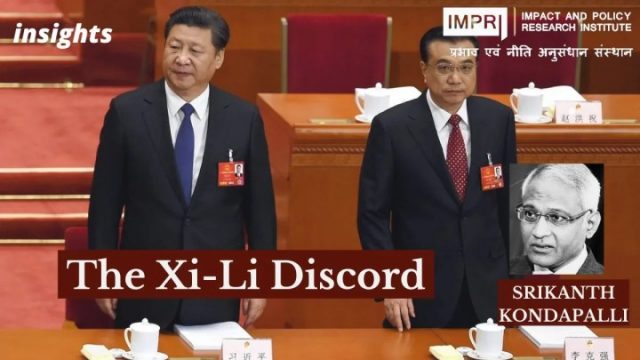 Chinese Premier Li Keqiang is a worried man these days. He is now at the forefront of the “people’s war” to counter the pandemic but also to restore the economy battered by Communist Party chief and Chinese President Xi Jinping’s “zero-Covid” lockdowns and curbs on booming economic powerhouses.

This is in sharp contrast to how Li was feeling when I, as part of a group of scholars and think-tankers, met him only a few years ago. In a 90-minute extempore presentation to us, Li was upbeat about the “medium-high growth” targets and the economic pivoting to domestic consumption and services. He was only concerned about the falling purchasing power in the rural areas and to the growing income disparities.

Li’s confidence seems eroded now with the massive fall in the economy in the past two years, triggered by mass lockdowns, stringent border controls and quarantine procedures. These were aggravated by a sudden crackdown last year on big businesses such as Alibaba, Tencent and Meituan, while allowing the free fall of real-estate giants like Evergrande and others. Alibaba chief Jack Ma went into hiding after he made comments on the country’s banking system. Its shares tumbled.

Xi defended these radical policies under the rubric of “common prosperity”, essentially the same old idea of “robbing the rich to help the poor.” In reality, all it did was to lead to economic disruption and slowing growth.

Two distinct economic policies have emerged: Xi’s policy of Communist Party control over businesses versus Li’s “street vendor” economy. Xi bulldozed through a model that allowed big State-owned and private enterprises to flourish under his absolute control. His ‘anti-corruption drive’ targeted only the political and economic base of rival factional leaders Jiang Zemin and Hu Jintao. Jiang’s “Shanghai gang” and Hu’s communist youth league (to which Li also belonged) suffered the most, while Xi consolidated his control.

While Xi had grandiose plans for China’s “rejuvenation” and the “Chinese dream” till 2050, Li’s down-to-earth policies were trying to address the economic problems afflicting the country. While Xi declared victory over poverty alleviation and the ushering in of a “well-off society” last year, Li pointed out to the extensive work needed to alleviate poverty in urban areas, with the per capita income of over 600 million Chinese still under $140 a month.

Li addressed 100,000 officers and cadre on May 25 on the restoration of the economy. This is unprecedented. The last time such a meeting was held – though on half the scale of Li’s meeting — was in the aftermath of Mao’s disastrous Great Leap Forward in the late 1950s. Li admitted to a fall in the value added by Chinese industry and thus to a fall in revenues.

Li’s biographers have noted the studious upbringing he had. In fact, then party supremo Deng Xiaoping had noticed Li’s talent on a visit to Henan province and notified his intent to promote Li to the top post in the State Council.

In the run-up to the crucial 20th Communist Party congress this November, the Xi-Li tussle is expected to intensify as the stakes for each faction are high.

There is, of course, play around the age limit criterion, as well. Li, born 1955, is approaching the age limit for a Politburo Standing Committee (PSC) member – 68 years. Xi, born 1953, has already crossed this limit, but at the parliament session in March 2019, he had his term as President, if not the General Secretary’s post, extended, for possibly an unlimited number of terms.

By factional strength, though Xi has absolute majority in the PSC, his mishandling of the pandemic and the economy, the deleterious effects of the tussle with the US, the negative effects of the Russian invasion of Ukraine, etc., have dented his control. While the recent May 5 Politburo meeting drowned any criticism of the “dynamic zero-Covid” handling, interestingly it did not mention the “core” position of Xi in the party.

In China’s political structure, the top political leader and the Premier are by design at loggerheads with each other. In reality, Premiers have generally played a balancing role, if not second fiddle to the top leader. Recall Premier
Zhou Enlai vis-à-vis Mao, or General Secretaries Hu Yaobang and Zhao Ziyang during Deng Xiaoping’s reign, or more recently, Zhu Rongji under Jiang Zemin or Wen Jiabao under Hu Jintao. Will the personality and ideas clash in the Xi-Li equation trump the political structure? Will Li, then, break the mould and live to tell the tale?

This article was first published in The Deccan Herald as Trouble in Middle Kingdom: Xi-Li tussle comes to the fore on 5 June 2022.