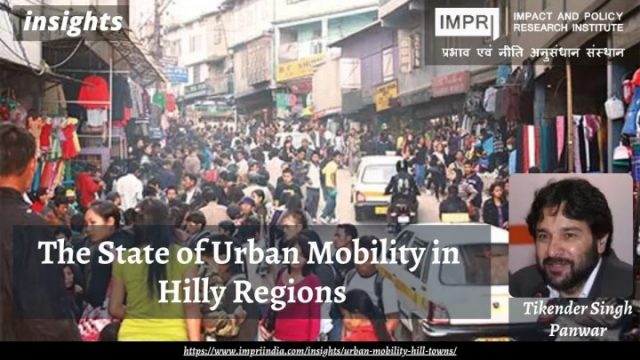 It is better to earn during the lean period than in a full-blown tourist season, said Ramu, a taxi driver in Shimla. Explaining the reason for this, he said that during the current tourist season, most tourists enter the hilly state of Himachal Pradesh in their cars. Those who come by train or bus find it extremely difficult to commute. It takes roughly an hour to reach from the railway station to the Lift, which connects the Mall to Cart Road, a destination that most tourists like to visit.

The stretch from the railway station to the Lift is less than two kilometres; still, during the current season, more than an hour is consumed because of the sheer traffic. In such a situation, people like Ramu lose their business as they can do less work during the tourist season.

This is not just a taxi driver’s story; every resident who stays in Shimla is complaining about the traffic woes. It has become challenging to commute in the town through motorised transport owing to the massive flow of tourists in the city. The sweltering heat in the plains is further forcing people to camp in the hills.

Sanjay Thakur, a known hotelier in the town, said that the current season shows bright prospects for the hospitality industry after two years. He said the hotels were completely sold out, and no place was left. The room tariff has also jumped almost double the original, and this year has been a good season for the hotel industry. He wished there was a delayed monsoon so the tourism industry could earn more during the season.

Traffic snarls, more tourists, and more cars, on the one hand, are a problem for the town and its residents; on the other hand, this rush also means a good economy for the hospitality industry, for the working people and a large section of the population for whom this is bread and butter.

However, the current model of development with spontaneity guiding the principles of city development or tourism is not a sustainable one and has its perils. It is high time that the major stakeholders start working on alternatives ensuring both a vibrant economy based on tourism, simultaneously ensuring that the ecological footprint of the hills and the mountain towns are not disturbed. There is no point in adopting the principles of plains in the mountains for some of the basics of mobility.

Shimla town has a population of roughly 200,000, but over 4.5 million tourists throng the city a year. The number is ever increasing. It is not just that the tourists add up to motorised mobility in the form of cars entering the town, even the local population has added a considerable number of cars and every year there is addition of new cars.

Replying to a question in the state Assembly, Himachal Pradesh Chief Minister Jairam Thakur stated that the total number of vehicles in Shimla had reached 77,939. This is beyond the capacity of the road length. The road density in the town remains the same, so where will they run? The mobility plan or design, driven with motorised transport in the mountain towns, particularly in Shimla, has to be inversed completely to ensure sustainable development.

The strategy is quite vividly laid out in the Shimla Mobility Plan, passed and approved in the Shimla Municipal Corporation during the period this author served the city as a deputy mayor.

The principles for mobility for Shimla town are simple: go back to the basics, i.e., promote pedestrianisation; create a strong and secure public transport system focusing both on horizontal and vertical mobility; ensure alternate modes of non-motorised transport; create infrastructure by digging tunnels across the mountains for easy passage of people; coerce people commuting in cars, at least during the peak hours; the bottom line is: focus on mobility of people and not the  mobility of cars.

Unfortunately, over the years, the Shimla Mobility Plan has not even been referred to, and the Smart City money is used to widen roads, thus creating more spaces for cars and inducing people to buy more of them. There is hardly any focus on pedestrianisation; instead, more and more roads are opened for motorised transport; two such roads are: from Boileauganj to Vidhan Sabha and from Sanjauli to IGMC. Under pressure from a certain section of people, the administration thought that this would ease the pressure on Cart Road.

A recent visit to Shimla shows that now even these two roads are choked, and it has become a nightmare for the pedestrians to walk on these two pedestrian-friendly roads.

The city still has a high footprint of pedestrians, perhaps one of the highest in the country. Nearly 45% of the people in Shimla commute on foot, a practice which must be strengthened by providing more spaces in the town. New infrastructure must be created for the same. Simultaneously, emphasis must be laid on vertical mobility. Unlike plains, where horizontal movement is the only form, in mountain towns, which are like a cone, the distance travelled on top of the cone covers a far wider distance at the bottom, provided there is a vertical mobility available. Hence, more infrastructure must be created by constructing more escalators and elevators.

Further, the public transport must be strengthened and made more secure and reliable. Most families do not prefer to send their children or commute by bus, which is quite insecure and unreliable for them. The smart solutions must work there and more buses should be added to the existing fleet. Simultaneously, already approved ropeways, and these should not be for joy or just for tourists but as a mode of transport, must be constructed on priority.

Those who travel alone in their cars during the peak hours should be coerced into avoiding that and ensuring that there is a shared transport mechanism.

There are many reasons why the issues continue to exist. However, one of the reasons is that an assortment of agencies looks after the mobility sector. The traffic police, urban transport department, public works department, urban development department, city government-Shimla Municipal Corporation etc. are different agencies meant to do one single work – ensuring mobility. The parastatals under the state government hardly lend an ear to the city administration, which is then seen to be lavishly spending money against the basic principles of urban mobility by creating more spaces for cars and so on.

It is high time that a city transport utility is created under the city administration, which has all the arms of governance. This could just be a beginning of a long path to trudge. Else, what we are witnessing in Shimla, in fact in all the mountain towns, is a nightmarish development, which is neither desired nor sustainable.

This article was first published at News Click as Nightmarish Urban Mobility has hit Hill Towns, but There’s a way out.