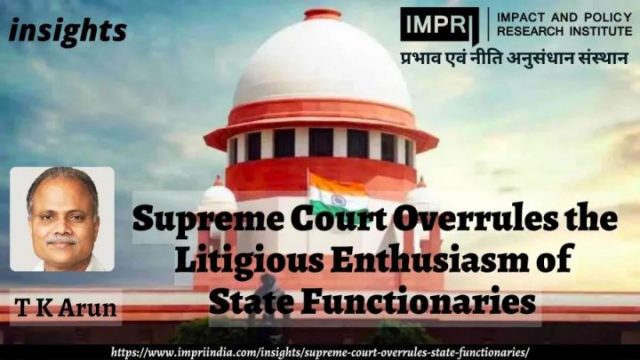 The Supreme Court passed an order last week placing a fine of ₹1 lakh on an officer of the Enforcement Directorate (ED), to be deducted from his salary, for filing an appeal in the apex court against the bail granted by the Allahabad High Court to a cancer patient in a money laundering case. This is a most welcome development.

The Bench, comprising Justices MR Shah and MM Sundresh, observed that the appeal wasted the court’s time, besides the stationery and court fees needed to file the appeal.

The ruling merits wide appreciation on five counts. One, it warns government functionaries that a decision to litigate is a serious responsibility, cavalier discharge of which could have personal repercussions. Two, it puts an appropriate premium on attempts to use the resources of the Supreme Court, including the time of the Justices, and discourages making frivolous claims on those scarce resources.

Three, it underlines the value of a high court ruling, which, increasingly, is treated by many parties, particularly the state, as contingent. Four, it reiterates, implicitly, if not explicitly, the distinction between incarceration before trial and imprisonment as punishment. And, five, it seeks to dampen the litigious enthusiasm of India’s most prolific and profligate litigant, the state.

Too often in India, government officials appeal against a legal ruling that has gone against them, regardless of the merits of the ruling. In some cases, it is part of a tactic to punish the little people who have the temerity to question their overlords by not only scrutinising and disputing a diktat they have received, instead of rushing to comply but also taking the said overlords to court.

What better way to punish them than to overwhelm them with the might and endless resources of the state by challenging the court order in their favour at a higher level of the judiciary, and to keep doing this till the little people are defeated, drained of energy, resources and the last dregs of the spirit of rebellion?

In other cases, civil servants turn to litigants to defend their tender behinds. Ever since a certain Vinod Rai, as the then-Comptroller and Auditor General of India, innovated a concept of notional loss and came down like a tonne of bricks on those deemed to cause any loss to the exchequer, even notional loss, few civil servants have ventured to take financial decisions without first checking if they have basic protection.

The most expedient way to distance themselves from any culpability for any conceivable loss to the exchequer is to dispute any financial claim on the government, leave it to arbitration, dispute the arbitration award in the court and let a court order serve as a protective covering for the official posterior.

The present order from the Supreme Court would, we hope, make public servants think twice before using the legal system merely as a baton or shield.

How this case differs

This is not the first time the Supreme Court has penalised frivolous petitioners. But this is a rare occasion when a senior government functionary has been pulled up for wasting the court’s time and resources and made to personally pay for the offence.

Ideally, the Supreme Court should devote itself to deciding matters of constitutional principle and propriety while being called upon to serve as the final court of appeal on matters that hinge on evidence only rarely. High courts should be the place where the buck stops on matters of evidence and applying the law. Only cases where principles of the Constitution are in play should be escalated to the Supreme Court.

However, virtually anyone who has the money to hire a Supreme Court lawyer now appeals against an unfavourable high court order. The present judgment upholds the finality of the high court ruling, given the facts of the case. More Supreme Court rulings should drive the message home.

Many readers commented on the news story that reported on the Supreme Court ruling found fault with the court, assuming that the court had sided with a money launderer. This voice a misunderstanding widespread in the country. A person being investigated for an alleged offence is innocent till proven guilty.

There are just three grounds for denying the accused their fundamental right to liberty: they could destroy incriminating evidence, they could repeat the offence or they could flee. Detaining a person before trial is commonplace in India — most prisoners in Indian jails are, in fact, undertrials. This must change.

As Justice VR Krishna Iyer said, bail should be the rule, and jail is the exception. Justices Shah and Sundresh have upheld this norm rather than being kind to the accused because he has cancer.

According to the data presented by the minister for law and justice to Parliament, there is 4.7 crore pending cases in India: 70,156 in the Supreme Court, 58,90,726 in the high courts and 4,09,85,490 in the district and subordinate courts. About 182,000 of them are 30 plus years old, according to a news report, meaning that these commenced before the median Indian was born — if all Indians were listed by age and the list arranged in an ascending or descending order, the age of the individual who finds himself or herself right in the middle is the median age, and it is 28.4 at present.

The government is the largest litigant — there is consensus, accounting for 46-50% of all cases. If the present judgment dissuades many cases, it would spare not just ordinary people a lot of harassment but also bring down the pendency of court cases.

May more judges of the Supreme Court and of India’s high courts follow the example of Justice Shah and Justice Sundresh and dissuade pointless litigation by civil servants.

The article was first published at The Federal as Hold thy hand, litigant babu! on 2nd November 2022.