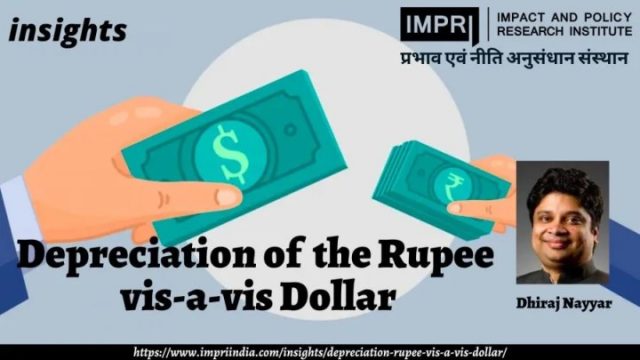 There is much fretting about the depreciation of the rupee vis-à-vis the dollar. It is commonplace to equate a strong currency with a strong economy. But that is not true, especially in an emerging economy. Rupee depreciation is nothing to worry about as long as there isn’t too much volatility and sufficient foreign exchange reserves.

It is essential to understand that the exchange rate is a price fundamentally determined by the forces of demand and supply. In the context of the dollar rupee rate, a rupee depreciation happens when the demand for the dollar is more robust or, as a corollary, the demand for the rupee is weaker: Also, the US dollar is not just any currency. It is the global reserve currency, the primary medium of exchange for most international transactions and the premier store of value for the foreign exchange reserves of most countries.

In the last several weeks, the US Federal Reserve has raised interest rates sharply to fight unprecedented inflation, which has led to a flight of capital from countries like India into the US. Such an exit of capital increases the demand for dollars and reduces the demand for the rupee as investors sell their rupee-denominated assets and take dollars out. Just like for any good or service, when the demand increases, so do the price. The dollar becomes more expensive vis-à-vis the rupee.

The Reserve Bank of India (RBI) can go against the market movement and sell the dollars it has in its reserves in exchange for rupees to stem the fall in the rupee’s price against the dollar. Indeed, it has done so. But, in the end, the quantum of money that trades in financial markets dwarfs the RBI reserves. So, the central bank can only mitigate but not reverse the trend. Exchange rates are ultimately market-determined by forces of demand and supply.

It is a fallacy to equate a strong or appreciating exchange rate with a solid or prospering economy. Perhaps the only countries that have prospered with a consistently strong or overvalued exchange rate against the major currencies are the oil-producing economies. But they have a particular economic structure. They export an expensive commodity with a price-inelastic demand, and they need to import practically all other goods. Hence, it makes sense for them to maintain a strong exchange rate that makes exports expensive and imports cheap.

Every other country, particularly emerging economies, prospers when the exchange rate is relatively undervalued against major currencies, giving them a competitive advantage for exports of goods and services (other than oil). China’s growth strategy for three decades, starting in 2010, depended on an undervalued renminbi. Earlier, Japan, too, based its export-based growth on a weak currency, the yuan.

India has always had an implicit preference for a more robust exchange rate. Part of the reason is political optics. But part is also economical. India is hugely dependent on energy imports. It imports almost 90% of its oil requirement. And a weak rupee makes this critical item more expensive in domestic markets.

Since oil/energy is an input to everything else in the economy, it affects the general level of inflation and even growth, as also the current account deficit and fiscal deficit (because of related subsidies and taxes). In short, when oil prices are high, as they are now, a decline in the rupee can be very disruptive.

India- or its policymakers would be much more comfortable about the rupee level if the country had energy self-reliance. That is a very worthwhile goal. It requires a two-pronged approach:

►Increasing the exploration and supply of oil and gas domestically.

►Investing in the scaling up of renewable energy (RE) technologies. A weaker rupee would complement the other policies the Union government has put in place to boost manufacturing in India.

It must also be noted that the rupee is not a global currency because there is no full capital account convertibility. Again, policymakers have been rightly cautious about liberalisation, which can also open the door to more volatility.

However, India will eventually open its capital account fully as a vast economy. Once the rupee became an international currency, debates about its strength became more critical. Until then, it is crucial to make the most of the exchange rate to gain a competitive advantage.

This article was first published at Economic Times as View: Don’t fret over the depreciating value of the rupee

The real Agni-Path to better jobs

Correct Approach to Disinvestment: Dribble Small Stakes Throughout the year