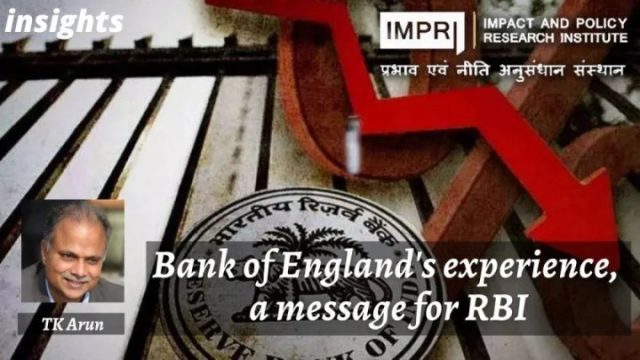 The Bank of England is of the view that further sharp increases in policy rates could do more damage than good. The RBI’s MPC will do well to bear this in mind.

The Bank of England has followed in the US Fed’s footsteps and raised its policy rate, the bank rate, by 75 basis points, to 3 percent. But there the similarity ends. Bank of England Governor Andrew Bailey has said what US Fed Chairman Jerome Powell dared not: much of the rate increases that had to be done to rein in inflation in their respective economies have been done. Making further sharp increases in policy rates would do more damage than good, said Bailey. This is as significant as it is welcome, and India’s own rate-setters would do well to bear this in mind.

“The majority of the committee judges that, should the economy evolve broadly in line with the latest monetary policy report projections, further increases in bank rate may be required for a sustainable return of inflation to target, albeit to a peak lower than priced into financial markets,” the central bank said in its Monetary Policy Statement.

The interest rate priced into financial markets is 5.25 percent. This is higher than the peak policy rate the US Fed is likely to accomplish, which is estimated to be 5 percent, and way higher than the likely peak in England, given the likelihood of a recession the BoE already sees.

The BoE’s Monetary Policy Committee voted to raise the policy rate by 75 basis points to 3 percent, with seven members voting in favor, one member suggesting a 25 basis point rise in the policy rate, and the other dissenter seeking a 50 basis point rise. Both of them argued that the earlier rate increases are yet to fully work their way through the system, and the economy is already entering a recession, and, therefore, further sharp increases in policy rates could intensify economic distress to a needless extent.

“Nominal retail sales and services output had fallen. At the same time, there had been some wage growth, but real wages had fallen through the course of the year. The clearer signs of the cost of the living crisis taking hold on economic activity suggested a more gradated approach was warranted to avoid an overtightening in the policy.

The lags in the effects of monetary policy implied that sizable impacts from past rate increases were still to come through. The continued risks from volatility and geopolitical uncertainty necessitated some tightening. But these risks also made it harder to take stock of the current situation, and a smaller rate increase was warranted to safeguard against creating a deeper and longer recession,” argued the MPC member in favor of a more modest rate hike.

There is much wisdom in this stance. If the US had not been in the throes of crucial mid-term elections, scheduled for the eighth of the month, and the government under pressure to be seen to be doing its utmost to contain inflation, it is likely that Powell might have felt freer to raise the Fed’s policy rate by less than three-quarters of a percentage point. As it is, after the announcement of the headline rate, there were indications that future rate hikes might be smaller, even with the US economy continuing to show robust wage growth, with the number of job openings outnumbering the number of job seekers 1.9 to one.

On October 10, Fed Vice-Chairwoman Lael Brainard laid out the case for caution on persisting with aggressive rate hikes: the Fed has already raised rates significantly and the effects of interest rate policy kick in with a lag; further, many of the world’s central banks have been tightening rates in step, and this synchronized tightening across the world will have effects that amplify the effects of domestic action.

Consider two scenarios. One, Chinese policymakers decide to go easy on the Zero-Covid policy and reduce the number of disruptive region-wide lockdowns, and, two, the Ukraine war comes to a close. The supply disruptions originating in Chinese towns locked down to prevent the spread of COVID-19 transmit, like the pandemic itself, to downstream production links in other countries. The resultant shortages added to inflation.

Of course, there is no clear indication that the Chinese are rethinking their policy. But they could. The recent disruption in the production of Apple phones, thanks to a seven-day COVID-19 lockdown in Zhengzhou, the largest operational base of iPhone maker Foxconn, is not doing anything positive for China’s image as a reliable partner for doing business, at a time of growing tension between the US and China. Further, these disruptions are feeding domestic discontent. Beijing has every reason for a change of tack on COVID-19, especially now that it has a nasal vaccine of Chinese make that, reportedly, is as effective as the foreign vaccines China has shunned so far.

The sanctions imposed on Russia in the wake of its invasion of Ukraine are squarely responsible for the sharp rise in energy and food prices. European cutbacks on gas purchases from Russia have raised their demand for gas from elsewhere, and ditto for oil. This has pushed up energy prices across the board — Germany is burning lignite, the dirtiest form of coal, in order to make up, in part, for the boycotted Russian gas.

While grain exports from the Black Sea have resumed, after a UN- and Turkey-brokered deal to let Ukrainian and Russian grain reach their traditional consuming markets, these have not reached the pre-war levels. Drought, floods, and fertilizer shortages have damaged the prospects of the next harvest as well.

What are the chances of the war coming to an early end? If Russia’s assaults on Ukraine’s energy systems continue, and escalate to destroy its gas reserves as well, after the onset of winter, Ukraine would be under pressure to sue for peace. European nations are under pressure to ease energy prices, and share scarce gas resources. They, too, would welcome any opportunity to end the war. Only the US would wish to continue with the war that is bleeding Russia of life and treasure at zero human and tolerable financial cost to the US itself. But the US has publicly committed itself to back Ukraine whatever it decides.

If the war winds down, and the sanctions on Russia are withdrawn, energy prices would plummet, and food prices normalize, although at a slower pace. Tom, the cat who chases Jerry to a background score of classical music, finds himself, at times, taking a swipe at the smirking mouse, only to find that Jerry has ducked and that he has smacked a raging bulldog on the nose. Central bankers battling away at inflation do not want to find themselves playing Tom, smacking growth with high-interest rates even as inflation has dropped out of the picture.

This article was first published on moneycontrol as A message RBI can take from Bank of England on November 05, 2022.