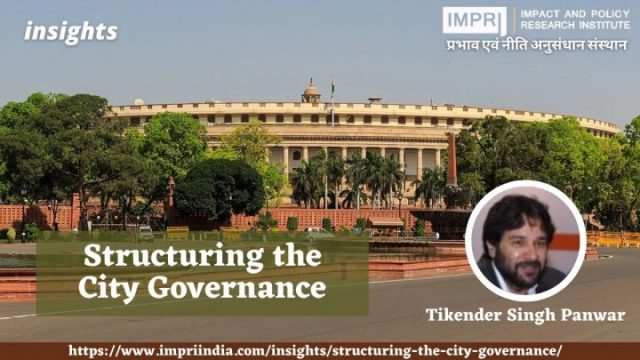 Invariably, in all the above states where city polls were held, and in most states, the general trend of elections in these local bodies is to vote for the ruling party candidates. The urban electorate that is scorching under faulty urbanisation policies thinks of getting some relief if the city government also happens to be politically in sync with the state government. A general understanding is that the city will get more flow of money, more projects and more developmental work. This does not happen.

Charles Correa, the famous architect and chairperson of the first Urban Commission in India, formed during the mid-1980s, said: The cities and state governments must compete for healthy development. The elected council or the mayors hardly run the cities. Instead, the chief ministers run the affairs of the city governments, ensuring complete control over policy matters.

Why is it that the people are hardly taken into confidence on policy matters, thus alienating them further? There may be many reasons for such behaviour in the governance structure. However, let me cite one of the principal ones. Urban planning is a state subject. There are three lists under the Indian Constitution. The union list, state list and the concurrent list. A state list means that the state governments are supposed to be handling the subjects mentioned in the list.

State governments directly control urban planning, being a state subject. Since the 1980s, there has been a debate on the importance of urban planning. The first urban commission made some recommendations. Then there was a constitutional amendment called the 74th Constitutional Amendment. According to this amendment, 18 subjects were supposed to be transferred to the city governments.

Cities produce phenomenal wealth. More than 66% of the country’s GDP comes from cities. They consume the biggest share of energy and have a very large consumer base. In recent decades, the large capital (even transnational capital) is now viewing Indian cities as avenues for increasing their profits. In order to do this, the most important tool is the process of city planning. This process decides the land use in a city and how the capital must move with economic prospects flowing from real estate, etc.

The second area is the privatisation of utilities which has taken rapidly in the recent period. Water, sanitation, health, electricity, education, and the list are sectors where private capital has ventured to maximise its profits. And all this is done in the guise of better performance and efficiency. The state does not want to lose these important governance sectors, both for economic and political reasons.

An interesting reality came to light while reviewing the 74th Constitutional Amendment from 2012 to 2014 (this was done by a team headed by KC Sivaramakrishnan, the former Urban Development Secretary; the author was also a team member). The Mumbai mayor, after her term, wants to become a Member of Legislative Assembly (MLA). Mumbai city has perhaps five Member of Parliaments (MPs) and nearly 30 MLAs. Still, a mayor after her term would aspire to be an MLA. The progression is clear that it speaks about the necessity to change the present set of urban governance.

It is high time that we start looking beyond the prism of the 74th Constitutional Amendment. There is no point in pushing for its implementation. What is required in the present setup is a clear distinction between the subjects that must be transferred to the city governments. Instead of a vague direction that flowed from the above amendment without making it mandatory for the states, a new list must be created to handle the urban system. Why?

There has been a massive change in urban dynamics in the last few decades. Nearly 40% of the people now live in urban centres. The multiplicity of governance is making even simpler things complex and affecting the services in the cities. There has also been a complete metamorphosis in the labour structure. The social reproduction of capital is now dominating the cities instead of being large manufacturing hubs.

In simpler terms, things that were supposed to be done at the family level have now taken a different shape in social production. There is a new platform-based economy that is now witnessed in most cities. The informal sector workers have increased phenomenally, with their bargaining capacity dwindling phenomenally. Migration is a big phenomenon that was not a dominant factor during the early 1990s.

The impact of climate change is evident in the cities. We have one of the worst polluted cities in the world. Urban commons and biodiversity are being robbed in one of the most unsustainable forms of urbanisation. Even urban governance is further alienating the people in the decision-making process. There is hardly any participation of the people in deciding their urban futures. The smart city-SPV model is bureaucratically controlled with no people’s participation.

How Must it be Done?

Akin to the state cadre of officers, there must be a separate cadre of officials for the local bodies. Public services like health, water, sanitation, education, fire services, housing, and the social sector must be completely under the local bodies. Likewise, city planning must be the domain of the city government. The departments must be transferred for capacity building. Climate change, biodiversity, disaster mitigation and adaptation must be transferred to the local body list.

The challenge could be with some of the issues that are peripheral in nature. For that, a dialogue mechanism should be built to ensure that the city and its periphery work in tandem. The finances must equally be transferred to the city governments, and this should flow right from the Goods and Service Tax to the income tax. A nominal 10% of the total income tax collected from the city governments should be transferred to the cities respectively. This can be a good starter.

For the cities and their people to lead a secure and liveable future, it is necessary that the tools of planning are handed over to them and not restricted to only professionals. This will also bring the most creative forms of urban development to the fore. Sooner the better.

First published in NewsClick, For Better City Governance, Local Body List is a Must, on April 2, 2022.

Watch Tikender Singh Panwar moderating the session on Innovation and Empowerment of ULBs for Effective Decentralization and Accountability.