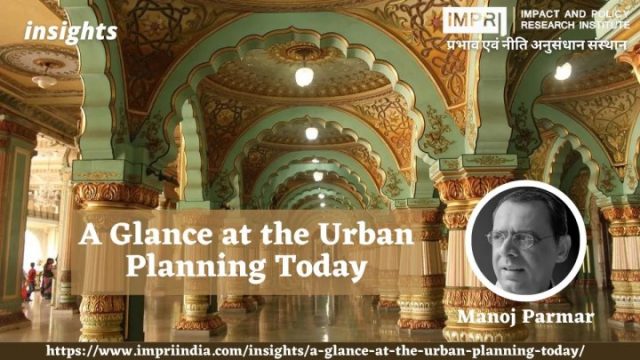 Many critics have pointed to the failures of the modern urban planning paradigm, especially the obliteration of vitality of the neighbourhoods, demarcated and sterile functionalism and production of a public realm that is alienating from its traditional qualities addressing quality humane urban form.

Having said that it is also apparent that the focus on articulating or locating the discord within the modernist paradigm largely remains absent theoretically. The probable reason for such a situation is partly due to not being able to fully capture embodied experience manifested in an overwhelmingly visual spectacle. The visual disposition of place is governed by the modern concept of abstract space. Hence, utopianism and functional paradigm dominated the project of modernist planning. There have been several attempts to theorize the human aspect of urban form and primary literature by Christopher Alexander, emphasizing the elementarist approach to the comprehensive urban experience, mainly revolved around scientific logic, delight & aesthetics, phenomena and everyday life.

The phenomenological critique is an open-ended discourse and can lead us to see precisely where earlier paradigms in urban design went wrong; it can also help lead us to blur the boundary of the dichotomy that is perpetuated in several pieces of literature alienating modernism vs orthodox traditionalism. Having said that, phenomenology research has a cultural connotation, while most of the literature is produced in other parts of the globe, the clarity of such relation between phenomenology and cultural specificity or psycho-phenomenology is yet to be explored to make any conclusive remark, however, his literature and position remain tirelessly valid.

But the last point is very important of all, is urban design increasingly becoming subservience to urban science and engineering where spatial, experiential and visual qualities are almost suggested to be pushed into the margin. In this reference, the work of Christopher Alexander remains critical, secular and timeless harbouring nature and existential embodiment that goes beyond architecture and urbanism.

First published on Between Architecture and Urbanism, Christopher Alexander, on March 30, 2022.