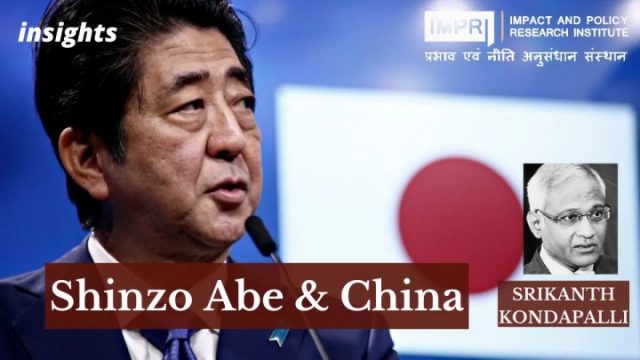 China’s official response to the assassination of former Japanese Prime Minister Shinzo Abe as “shocking” and “unexpected incident” is at variance with the scorn being poured out on its rabid Communist Party-backed nationalist social networking sites. In some Chinese quarters, there is even elation, depicting Abe’s assassin as a hero!

These conflicting views of Abe is an outcome of the complex relationship between him and China’s leaders in the past decade and a half. Although Abe’s visit to China in October 2006 was considered an “ice-breaker” visit, as was his last visit in 2018, and though Japan developed substantial economic interdependency with China in those years, China’s rise created the conditions for Abe to hedge and explore balancing mechanisms against China in both economic and security terms.

China viewed Abe’s revoking of crucial aspects of Japan’s 1950s’ “peace constitution” negatively, without acknowledging that it was Beijing’s brazen territorial and irredentist claims that were at the root of Abe’s gradual rethinking on China.

Abe was convinced that China’s military forays on the Senkaku islands since September 2010, its “six nos” policy on Taiwan, and militarisation of the disputed South China Sea islands, were pointers to Beijing’s self-aggrandisement bid. China’s nearly 600 transgressions a year on the Senkaku islands, which are administered by Japan, was to consume much of Abe’s energies and that of Tokyo’s ties with ally United States.

Abe also took the bull by the horns by visiting the Yasukuni shrine in December 2013 – a temple where the war-dead were honoured. While Abe discontinued such visits, he exposed the double-standards of China on historical issues, conveying the message that what happens in Japan’s politics is the domain of the Japanese and China has no veto over it.

Abe also did away with the routine annual offering of apology by Japan’s leaders to China and other countries in the region for past wrongs. Abe suggested that the current generation of Japanese are not responsible for what happened in the 1930s and need not apologise for them.

Over time, Abe also reduced the quantum of Official Development Assistance that Japan disburses to these countries as “compensation” for historical issues – including for the modernisation of China and the iconic Pudong Special Economic Zone in Shanghai — and increased such assistance for India and other countries.

But it was Abe’s renewal of a debate on enhancing Japan’s defence budget (capped previously at 1% of GDP, but marginally increased to 1.2%), on operating its Self-Defence Forces beyond the 1,000 nautical miles limit, the exporting of arms to Philippines, Vietnam and others, and his recent comments on nuclear deployments in the face of China’s muscle-flexing in the Taiwan Straits that raised China’s hackles the most.

On the other hand, Abenomics, as his economic thinking came to be known, acknowledged the importance of reviving the economic “lost decades” of Japan and, for this reason, Abe had sent his senior-most party colleague to China’s Belt and Road Initiative meetings, seeking to invest in infrastructure projects and enhancing economic interdependencies. Abe also tried the “quality infrastructure” route by committing over $100 billion, but the progress was lax. To combine efforts with the Chinese was a way to reduce conflict with China.

This was also Abe’s consideration for moving faster on the 15-member Regional Comprehensive Economic Partnership agreement that was cobbled up last year. There were also the East Asian free trade negotiations with South Korea and China.

Most significantly, Abe, tirelessly and against all odds, pushed the idea of the Indo-Pacific into mainstream strategic thinking in the last decade. As China walked away from UN maritime convention law and its arbitration procedures in July 2016, the writing on the wall was clear to Abe and others. Much of global trade is dependent on maritime areas and China’s stealthy grabbing and militarisation of islands unnerved many countries dependent on the seas.

In 2007, Abe spoke to the Indian Parliament on the need for an overarching initiative in this regard, proposing to create an “arc of freedom and prosperity”. In time, the Quad idea came about but could not take shape immediately. It was revived and finally took off in 2017 and has been gaining strength since then. Abe wanted to usher in a rules-based order and a concert of powers in Asia that could stop any aggrandisement in the region.

While he continues to be hated in China, the creation of certain strategic alternatives for Japan and like-minded countries, his work to institutionalise norms, and his efforts for predictable and stable outcomes and decent living standards for several countries remain his positive legacy.

This article was first published in Deccan Herald as Shinzo Abe is dead, but the Chinese still love to hate him on 9 July 2022.