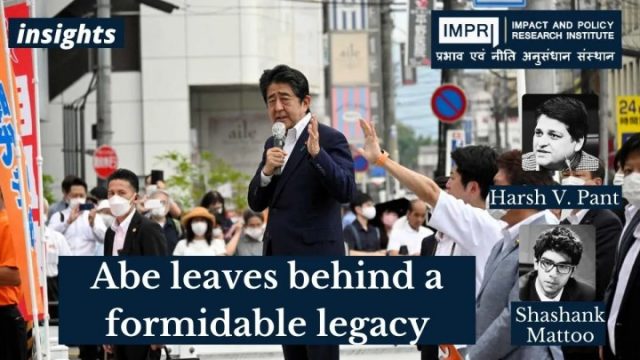 Japan before Shinzo Abe seemed like a country adrift. Its economy, hamstrung by years of low growth and an aging population, was feared to be in terminal decline. China’s meteoric rise threatened its security and its once unquestioned status as a first-rank power in Asia. When the Fukushima nuclear disaster took place in 2011, the Japanese government —once respected and renowned for its competence — conspicuously failed to step up to the challenge.

Abe was initially an odd choice to lead Japan when his party returned to office in 2012. His first stint as prime minister (PM), from 2006 to 2007, had been an unmitigated disaster, and Abe was forced to step down after just a year in office. While many wrote him off after such an ignominious end, Abe clawed his way back to the PM’s office scarcely five years later. Comebacks would become a theme with Abe. Having staged his own, he set his sights on Japan.

He began by shaking the cobwebs off Japan’s seemingly moribund economy. His bold plan, eponymously termed Abenomics by friends and foes alike, sought to revitalise the Japanese economy through a mix of audacious fiscal and monetary stimulus and structural reforms. Abe’s administration pushed the country’s conservative business elite to boost wages, ease punishing work hours, and hire more women. While its record was ultimately mixed, Abenomics undoubtedly chipped away at the pessimism about Japan’s economic prospects. For the first time in a long while, it gave the world a reason to be excited about Japan.

Abe also fought pitched domestic battles to reverse Japan’s post-World War II pacifism. Faced with a rising China and a trigger-happy North Korea, Abe spent much of his tenure in office trying to work his way around his country’s pacifist constitution and leave Japan in a stronger strategic position than the one he found it in. To that end, he created the country’s first National Security Strategy, tightened his nation’s leaky intelligence apparatus, and reversed a prohibition on the export of arms.

Most significantly, he risked significant domestic discontent by allowing Japan to fight defensive wars in concert with allied nations. His deep and abiding influence was on display in the aftermath of the Russian invasion of Ukraine. Calls to double Japan’s defence budget, seen as little more than a pipedream before Abe’s tenure, are now commonplace and mainstream.

Yet, Abe’s vision was always focused on reaffirming Japan’s place in the world. He held office at a time when Asia needed a leader and Japan had got out of the habit of leading. Abe stepped in to fill the gap as few of his contemporaries could have done. In his first term as PM, he threw Japan’s weight behind the idea of a novel geopolitical concept: The Indo-Pacific.

Speaking to India’s Parliament in 2007, Abe argued against the traditional view that the Pacific and the Indian Oceans constituted separate domains of Asia. This speech, now titled The Confluence of the Two Seas, sought to dissolve those artificial boundaries and reimagine Asia as a community that was defined by a shared commitment to achieving prosperity and fundamental values such as democracy and human rights.

Abe believed that this new Asia would be led by a “democratic security diamond” which included India, Australia, and the United States (US); this concept eventually transformed into Quad. Even after an initial Quad meeting in 2007 failed to take off, Abe pushed relentlessly for closer ties with the US, Australia, and India. When China’s rise gave the grouping a new lease on life, Abe supplied Quad with its mission statement: Securing a “Free and Open Indo-Pacific”. It is no exaggeration to say that the rise of the four-nation grouping may be one of the defining geopolitical developments of our times.

Abe also led Asia at a time when Washington had seemingly turned its back on engaging with the world. After the Trump administration walked out of the 14-nation trade deal, the Trans-Pacific Partnership, Japan defied the odds and kept the agreement alive. It now stands as one of the world’s largest trading blocs by Gross Domestic Product (GDP). Even as Trump clashed with America’s European partners, Abe’s skillful personal diplomacy with the mercurial American president helped keep the alliance and America’s role in Asia on an even keel. In an uncertain world, he was our compass.

The bilateral relationship, which once grew only in fits and starts, now runs the gamut from joint military exercises and space dialogues to infrastructure development and supply chain security.

There are few capitals that will miss Abe’s steady hand more than New Delhi. While a number of his predecessors pushed for closer ties with India, Abe placed New Delhi at the heart of Japan’s strategy for Asia and the Indo-Pacific. New Delhi and Tokyo upgraded the status of their bilateral partnership and articulated a joint vision for the future of the region. Japan’s robust investments in India as well as its willingness to take up infrastructure projects in the sensitive Northeast served to deepen ties. The bilateral relationship, which once grew only in fits and starts, now runs the gamut from joint military exercises and space dialogues to infrastructure development and supply chain security.

It is often remarked that nations “have no friends, only interests”. Yet, as the shocking news of Abe’s demise came in, PM Modi declared a national day of mourning. It was a fitting tribute to mark the passing of a leader who was, in the truest sense, a firm friend and a partner to India.

In the days to come, there will be many tributes to Shinzo Abe’s vision and the legacy he leaves behind. In 2013, just a few months after returning to the office, Abe boldly remarked: “I am back and so shall Japan be”. He kept that promise. That is his legacy.

This article was first published in Hindustan Times as Abe leaves behind a formidable legacy on 10 July 2022.