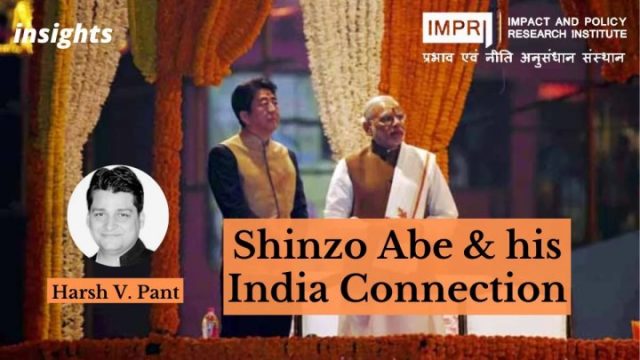 Japan’s longest-serving Prime Minister Shinzo Abe died on 8 July 2022, hours after he was shot at a rally while campaigning for elections to Japan’s upper house. Abe was instrumental in shaping and strengthening India–Japan ties, and as a mark of respect to Abe, Prime Minister Narendra Modi has announced one-day national mourning on 9 July.

While resigning as Prime Minister on August 28, 2020, Abe apologised to the people of Japan “for leaving my post with one year left in my term of office, and amid the Coronavirus woes, while various policies are still in the process of being implemented,” Abe bowed out of public life which saw him winning six electoral contests.

After resigning from his first stint as Prime Minister in 2007, he got a rare second term in December 2012 and was re-elected in 2014 and 2017, which enabled him to give stability to a nation desperately seeking it.

He has left behind a nation which has transformed, both domestically and in foreign policy, despite his inability to achieve some of his most-cherished objectives, such as negotiating with North Korea the return of Japanese citizens that were abducted decades ago; resolving a territorial dispute with Russia; and most ambitious of all, revising the post-war constitution to give more power to the Japanese military.

After resigning from his first stint as Prime Minister in 2007, he got a rare second term in December 2012 and was re-elected in 2014 and 2017, which enabled him to give stability to a nation desperately seeking it.

In a nation known for preferring incremental changes, Abe was keen to shake up the status quo from the very beginning.

On the economic front, his signature strategy of ‘Abenomics’, which relied on a mix of bold quantitative easing, fiscal spending, and structural reforms, did manage to ignite growth in a stagnant economic landscape at least initially. Japan witnessed its longest economic expansionist streak under Abe before the impact of COVID-19 grinding it to a halt.

Abe tried to do something which the Japanese conservative leadership hadn’t dared to touch before him. He tried to address the issue of Japan’s shrinking labour force by revising migration and gender policies. In an attempt to help women get into the workforce, Abe’s ‘womenics’ pushed companies to increase their hiring of women with the help of specially tailored government policies such as preferential government contracting to reward companies that hired women and government-funded day-care centres. It may not have completely changed the employment landscape for women in Japan, but it forced the Japanese corporate sector to confront its deeply-entrenched biases.

Abe’s imprint on Japan’s security policy is going to be equally significant. He managed to ‘normalise’ the Japanese approach to its national security, gradually, but surely. Shaped by his conviction that Japan should assert its strategic role regionally and globally, he increased defence spending and was unapologetic about the need for Japan to enhance its power projection capabilities. His government reinterpreted the Constitution to allow Japanese troops to fight abroad for the first time since World War II, as well as revoked a ban on exercising the right to defend a friendly country under attack.

In an attempt to help women get into the workforce, Abe’s ‘womenics’ pushed companies to increase their hiring of women with the help of specially tailored government policies such as preferential government contracting to reward companies that hired women and government-funded day-care centres.

This domestic shift allowed Abe’s Japan to have a more robust regional and global engagement. Despite facing challenges from the Trump administration’s transactional approach toward its allies, Abe managed to keep the US-Japan ties on an even keel. Japan’s role in the global security architecture has evolved to a point where discussions are underway about it potentially joining the Five Eyes intelligence partnership between the United Kingdom, the United States, Australia, New Zealand, and Canada.

At the regional level, he was the first one to articulate the Indo-Pacific vision back in 2007 when he delivered his speech outlining the ‘Confluence of the Two Seas’ to the Indian Parliament. It was this strategic vision that he shaped his foreign policy outreach during his stint in office, which saw him nurturing ties with major regional powers such as India and Australia and defence partnerships with Southeast Asia.

For India, Abe will remain a very special Japanese leader. His fondness for India and his vision for India–Japan ties have been central to his vision of the Indo-Pacific. After visiting India during his first term, he gave bilateral ties a new momentum by becoming the first Japanese Prime Minister to visit India thrice.

His relationship with Prime Minister Narendra Modi and their convergent worldviews allowed India–Japan ties to touch new heights in recent years. It was under Abe’s leadership that one of the last irritants in this bilateral relationship, Japan’s resistance to recognising India as a nuclear power, could be tackled when the two nations finally decided to sign the civil nuclear pact in 2016.

Growing concerns about Chinese aggression have resulted in Tokyo and New Delhi reconfiguring bilateral ties to make them more ambitious from undertaking joint projects in India’s Northeast and wider South Asia to the revival of Quad in 2017, and joint connectivity projects such as the Asia Africa Growth Corridor. As India expanded its footprint in East and Southeast Asia, it has found support from Japan which has also been steadfast in its support for New Delhi’s position on its border disputes with China. It was Abe’s leadership which allowed Tokyo to expand the ambit of its ties with New Delhi.

Abe leaves behind a consequential legacy of a rare breed of Japanese statesmen who shaped not only the Japanese domestic milieu but also managed to have a significant imprint on global strategy. For a self-confessed conservative, this is a truly remarkable achievement.

This article was first published in ORF as Shinzo Abe and India:  A lasting legacy on 8 July 2022.