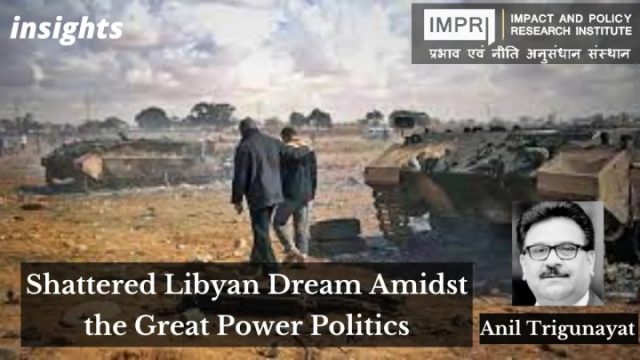 Hapless Libyans who hoped and dreamt for a ‘New Libya’ became the victims of the militia-backed power seekers in the East and the West and not much talked about the Southern part of Libya.

Over a dozen long years of continued suffering have passed since the Arab Spring struck Libya. A North Atlantic Treaty Organization (NATO) intervention eliminated an autocratic ruler of over 42 years, leading to death and destruction in the trail, and germs of militia groupings, supported by rival groups and powers from the region and beyond, continue to infest the war-ravaged country till date. Interventionist powers had plans for the day after.

Hapless Libyans who hoped and dreamt for a ‘New Libya’ became the victims of the militia-backed power seekers in the East and the West and not much talked about the Southern part of Libya. Instability and power grab by force remain the underlying theme. For years the country has had an ominous distinction of having at least two Prime Ministers and two so-called Parliaments who have undermined any possibility of resolution of the underlying trust deficit, opportunism, instability, disarming of the militia groups, and return to normalcy via elections.

Any Libyan watcher and I have served there and witnessed the Libyan desire for normalcy through elections (2012 the best one could ever have), peace, progress, modernity, and development, would attest to the failing of Libya mainly by the so-called partisan external stakeholders who exploited the powerful rival militia groups to exercise their own power and interests in the oil-rich country. Oil supplies they did try to manage and so was their effort to contain illegal migration into Europe. But none of these was for the benefit of the common Libyan who continued to hanker for calm.

No wonder, one witnessed the competition among the group of countries on two sides of the aisle. While the Tripoli-led government in Western Libya of PM Dbeibah ( holding onto power beyond his term) is supported by Turkey, Italy, and Qatar, the strong man General Khalifa Haftar and PM-designate Fathy Bashagha, out of Sirte, continue to be supported by France, UK, UAE, Saudi Arabia, Egypt, and Russia among others, which is reflective of their own geopolitical competition also elsewhere. The USA plays on both sides.

Berlin Process and UN efforts, to bring the two rival political camps and self-serving institutions, are continuing to bridge the gaps between the two sides so that much-awaited elections are held and smooth power transition is ensured and the legitimate authority could work to stabilize and develop the country to realize the dream of the 2011 Revolution. However, the end result is one step forward two steps backward and the mess gets messier.

Earlier in the week, the two rival militia groups in Tripoli supporting the two governments or Prime Ministers fought an hours-long battle using “the indiscriminate medium and heavy shelling in civilian-populated neighborhoods” as per UN Mission in Libya. PM Dbeibah and PM-designate Bashagha indulged in mutual recriminations.

As per local media reports clashes pitted the Tripoli Revolutionaries’ Brigade militia, led by Haitham Tajouri, against another militia allied with Abdel-Ghani al-Kikli, an infamous warlord known as “Gheniwa,” and later much smaller ones joined in other parts of the city and elsewhere trying to demolish the prevailing pollical stalemate by force. UN and the international community expressed concern and urged an “immediate ceasefire” which goes to show how powerful these non-State actors are.

UAE which has been a major actor in the region and the Libyan revolution urged “urged parties to set aside division, restore calm and serious dialogue, and prioritize the national interest to restore security and stability in Libya. UAE reiterated its stance calling for a solution to the conflict in Libya and its full support for all that preserves the security, stability, and unity of the country in accordance with the roadmap outcomes, Security Council resolutions, and the ceasefire agreement.”

The Organisation of Islamic Cooperation, formerly the Organisation of the Islamic Conference (OIC) issued a similar statement so did others. Like in the past the fighting got over temporarily but could rise with a greater vengeance again if the solution to the basic issues is not found and enforced with public participation and support.

During the past two years even as the apolitical stalemate continued, many countries reopened their diplomatic missions and several even deployed their Ambassadors. Some sense of economic rejuvenation had become imminent. But once again this kind of skirmishes and violence, politically pitted by myopic groups and leaders, may cause the foreign economic engagement to flee yet again. It is, therefore, important that all stakeholders must come on the same page, not only rhetorically, but in true essence and spirit, and hold their horses tight for the political race to take place in a democratic landscape free from militia fear and fright.

There have been consistent reports on social media and elsewhere urging India to lift the travel ban and reopen the diplomatic mission. New Delhi has been considering it for some time but the kind of situation that prevails and the past incidents of kidnappings of Indians, difficult evacuations, fledgling security on the ground, and overall unpredictability has left them with a Hobson’s choice. However, for India, it is imperative to be actively engaged with the Libyan dispensations as the stakes are high. Moreover, Time and Tide wait for none.

This article was first published in CNBC TV 18 as The great power politics and the shattered Libyan dream on August 31, 2022.