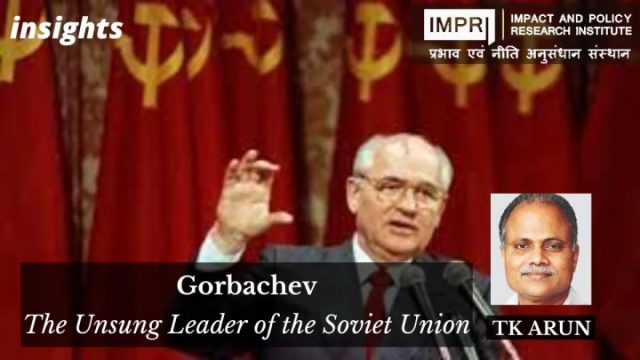 Reviled by many for creating a geopolitical disaster and precipitating the fall of the Soviet Union, he deserves credit for drawing the curtains on make-believe Communism and opening up the possibility of redeeming socialism from its Soviet travesty.

Mikhail Gorbachev became the General Secretary of the Communist Party of the Soviet Union in 1985, at the relatively young age of 54, succeeding, after the short-lived regime of Chernenko, Yuri Andropov, a reformer, whose regime was too short-lived to make an impact.

Gorbachev’s attempts to reform Soviet communism via Perestroika (restructuring) and Glasnost (transparency) ultimately led to the culmination of the long-drawn-out failure of an experiment to build socialism in one country, a country that was backward by contemporary capitalist standards, to begin with. The success of the Soviet regime in modernizing backward Russia, creating the kind of military-industrial capability that could defeat Nazi Germany and send a man into outer space blinded progressive men and women around the world to the perversion of the ideals of socialism that the Soviet Union had become.

Most would agree that they erred, those who responded to Mao’s call for rural areas to surround the cities, exterminate class enemies and vandalize icons of tradition and culture. But few of those who were fascinated by what the Soviet Union stood for are open to admitting its fundamental failure as ‘actually existing socialism’.

Revolution was supposed to happen, in the socialist ferment of the early 20th century, in the most advanced capitalist nations. Instead, in Germany, Britain, France, and other European countries, the working class rallied behind their national governments, when World War I broke out.

Revolution happened in Russia, thanks to the pugnacious pursuit of opportunities to grab power by the Bolsheviks under Lenin’s leadership. Lenin and the Bolsheviks chose to persist with their revolution and attempted to build socialism in one country when it became clear that none of the more advanced communist parties in the more developed capitalist countries were going to succeed.

It would be honest to accept that this experiment faltered and collapsed by the end of the civil war that followed the Bolshevik power grab. All the advanced nations sent in their armies to fight the Bolsheviks. The Communist Party of the Soviet Union abandoned all internal democracy and freedom of debate, and suppressed dissent within the party and by any section of the citizenry, in the single-minded pursuit of victory in the civil war.

Trotsky justified and carried out terror against Russians who opposed the revolution and succeeded. The political philosophy and practice dubbed Stalinism was already entrenched in the party, along with the blurring of the distinction between the party and the administrative unit, the Soviet, before Lenin died, following a period of failing recovery after being wounded.

Gorbachev’s death is perhaps the right time for those of us who grew up treating George Orwell as a right-wing propagandist to re-read Animal Farm and Nineteen Eighty Four. Khrushchev’s denunciation of Stalin did not convince every Leftist activist of the fundamental falsehood of the Soviet Union as communism in practice.

Gorbachev entered into treaties with America to reduce the size of Soviet and American nuclear arsenals. He refused to send in Soviet troops to crush the popular uprisings in Eastern Europe against the oppressive regimes that his predecessors had maintained in those countries. Latvia, Lithuania, and Estonia became independent.

The Soviet Union made immense contributions to making the world a better place, without a doubt. Welfare capitalism grew out of the fear of Soviet-type revolutions in European nations, aided by the spread of socialist ideas. This deepened and entrenched democracy.

Soviet help to national liberation movements accelerated the process of ending colonial rule from most parts of the world. Soviet aid helped countries like India forge their own development strategies, inducing the Western powers to offer competing assistance.

Much as the Americans hated India’s non-alignment, they kept sending PL 480 aid to keep India from becoming one of the dominoes falling to Soviet-type revolutions. American treaties and trade access supercharged Japanese renewal after the War, and the metamorphosis of Hong Kong, Taiwan, Singapore, and South Korea from wandering cats in China’s mean alleys into roaring tigers.

The governments of these regions did not have to worry about spending much money on defense or access to developed world markets.

There were negative consequences, too. Arguably, the regressive version of Islam that dominates its ideology, if not quite the Muslim imagination, is a product of the Cold War, with the West clamping down on all modernizing, democratizing tendencies in the Muslim world, solely on account of these tendencies being supported by the Soviet Union.

The Islamic revolution of Iran is the product of the CIA-backed overthrow of a democratically elected government in Iran, followed by the reinstallation of the Pahlavi dynasty, whose rule physically eliminated thousands of Communists and democrats.

Such elimination of Communists and democrats, who worked for social progress and democratic rights, was practiced in the largely Muslim nation of Indonesia as well.

The American-backed Suharto regime exterminated Communists and democrats. The US-backed Gen Zia-ul-Haq, as he Islamised constitutional rule in Pakistan. Western backing for the mujahidin for fighting the Soviet forces with religious zeal in Afghanistan later spawned the Taliban, who hosted Al Qaida.

Gorbachev helped precipitate the collapse of the Soviet Union. With that fell the pretense that there was some non-capitalist paradigm of economic development that developing countries could explore. Of course, we dismiss the notion that the state’s active role in the economy meant socialism or a socialistic pattern, with the confidence with which the Korean state engineered its thriving capitalist success story.

Globalization normalized capitalist rules, accelerated economic growth, and delivered more people out of poverty than any political or economic system had managed to, in any previous period of human history. Countries with sensible governments worked to broaden the base of participation in such globalized growth and reaped rich rewards.

Most Russians prefer to forget Gorbachev as a failure, who lost their position of eminence in the world. The world has reason to remember him with gratitude.

This article was first published in The Federal as Gorbachev: The Man Who Ended the Soviet Lie and Liberated Nations on August 31, 2022.