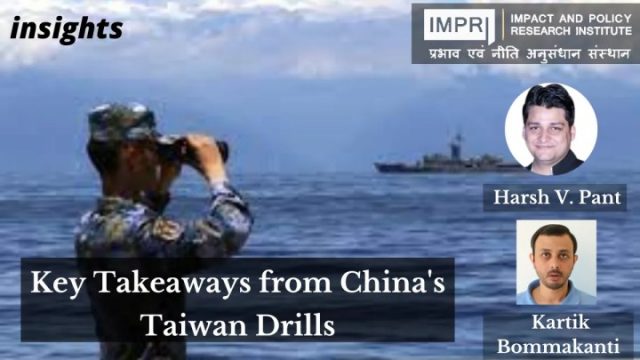 The recently concluded military drills by the People’s Liberation Army (PLA) in the Taiwan Strait just after the United States House of Representatives Speaker Nancy Pelosi’s visit to Taipei in early August reveal a great deal about the nature of the military capabilities of the People’s Republic of China. The Chinese military conducted these exercises in six zones around Taiwan with the express aim of testing their capacity to execute an encircling invasive attack against the Taiwanese main island.

Although a detailed analysis may take time, there is a reasonable amount of preliminary evidence to indicate where the relative strengths and weaknesses of the PLA exist following the conclusion of these exercises. Although China’s Eastern Theater Command (ETC) is responsible for planning and executing any potential invasion of Taiwan, the Southern Theater Command (STC) was also in an advanced state of alert for these drills.

First, the Chinese have made substantial progress in the development and operation of rotary and fixed-wing aircraft for dedicated assault missions against Taiwan. The People’s Liberation Army Army (PLAA) latest helicopters are almost as advanced as their American variants. The comprehensive reorganization of the PLA into group armies has enabled the Chinese to significantly operationalize their rotary wing aircraft.

Indeed, the latter could play a key role in any initial assault to capture Taiwan. An aviation brigade is part of each of the PLAA’s 13 group armies and is also integral to the group armies deployed in Xinjiang and Tibet.

Alternatively, the rotary component of aviation brigades, which represents frontline combat capabilities of the PLAA, could be kept in reserve and pressed into action for a prospective invasion of Taiwan following an initial assault with less advanced rotary aircraft in the PLAA inventory. There are two specialized air assault brigades as part of the PLAA’s 75th and 83rd group armies that are directly geared for an air assault mission against Taiwan.

These brigades have a demonstrated capacity to remain airborne for a long period, but this is insufficient as any potential invasion would require them to fly in close formations while simultaneously maintaining effective air-ground and air-sea communication. The latest drills do not definitively confirm these capabilities. The aviation brigades of the PLAA are a growing strength, but will only reach optimum strength, both operationally and technologically, over the next decade.

Missile capabilities are the second area where the PLA demonstrated its strength. According to the ETC, the PLA fired several long-range missiles of the Dong-Feng (DF) class in the vicinity of the islands of Matsu, Wuqiu, and Dongyin. The purpose was to test whether the PLA’s missile brigades could coordinate missile strikes and carry out post-attack battle damage assessments. The PLA likely gained information about Taiwan’s missile defense capabilities covering the island’s missile radar tracking capabilities.

In addition, the People’s Liberation Army Rocket Force (PLARF) which carried out tests also likely assessed the rapidity and precision with which Taiwanese defenses could be suppressed to prepare Chinese forces for air and amphibious assault. Conversely, the Chinese have revealed a significant amount to their adversaries, especially the Americans, about the strength and disposition of their missile forces.

Finally, a key focus of the PLAJLSF has been in the area of precision logistics which were not per se tested to any consequential degree by the PLAJLSF in the latest drills. Indeed, it is a core weakness of the PLA — without logistics, a full-scale invasion of Taiwan is impossible. Notwithstanding improvements, China’s amphibious assault capabilities, which are indispensable to an invasion, are a key weakness and can only succeed if the PLA also has a highly developed and taut logistics support system.

The PLA is working on the creation of a logistics network that is capable of time-sensitive responses that combine speed, precision, and efficiency. Relying heavily on its BeiDou Satellite Navigation System, the PLAJLSF is trying to ensure communications and coordination between spread-out mobile units on the battlefield.

Beyond timely combat support centered on supplies, reinforcements, and repairs, evacuation and medical assistance to dispersed air and amphibious assault units in unforgiving and demanding battlefield conditions will be crucial for a sustained and effective military mission across the Taiwan Strait. However, the PLA is deficient in amphibious vessels and has an inadequate number of personnel trained for complex logistics missions and military transport aircraft.

The military drills conducted by the PRC earlier this month were only a partial demonstration of the PLA’s military prowess. Irrespective of the progress made by the Chinese, the PLA has still some distance to traverse before it gains the confidence and the requisite proficiency for combined arms warfare that is crucial to the invasion of Taiwan.

Significantly complicating the latter is an American intervention on behalf of Taiwan, neutralizing China’s aim of a low-cost swift, and decisive capture of the island, rendering any cross-strait military action by the PRC into a protracted war. The PRC may need to complete several drills, which could lead to more crises before it can actually execute an invasion.

This article was first published in The Hindu as The big-picture takeaways from China’s Taiwan drills on September 2, 2022.

Kartik Bommakanti is a Fellow with the Strategic Studies Programme, ORF.