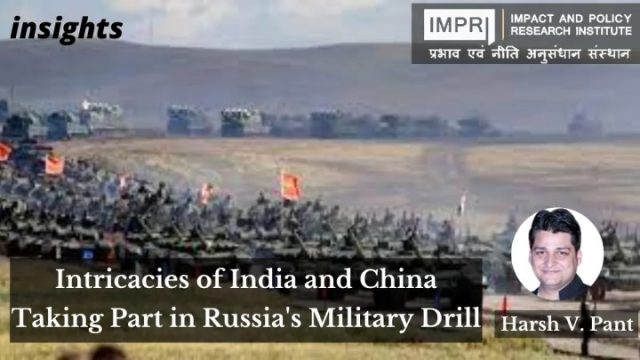 In this day and age of fluid partnerships among nations, military exercises have played a significant role in signalling intent. Global disruption has given joint military manoeuvres among states a new edge. Who exercises with whom is an important marker of strategic partnerships. And the Indian military has become one of the most active in this realm, showcasing not only its own expanding capabilities but also a political willingness to work with like-minded countries in delivering public goods. It is incumbent upon New Delhi to use them as part of its diplomatic outreach.

But New Delhi’s decision to send a contingent of the Indian Army for the September 1-7 Vostok 2022 military drill in Russia’s far east has raised eyebrows, particularly in the West which is trying to isolate Moscow after the Russian invasion of Ukraine. This is a major exercise involving more than 50,000 troops and 5,000 weapons units, including 140 aircraft and 60 warships, with the participation of troops from China, India, Laos, Mongolia, Nicaragua, Syria and several ex-Soviet nations. The Indian Army contingent comprising personnel of its 7/8 Gorkha Rifles will be undertaking ‘joint manoeuvres, including joint field training exercises, combat discussions and firepower exercises’.

For the West, the Russia question is front and centre at the moment. Washington, for example, has underlined that it has ‘concerns about any country exercising with Russia while Russia wages an unprovoked, brutal war against Ukraine’. But was easily countered by New Delhi which has argued that ‘India has been regularly participating in multilateral exercises in Russia along with a number of other countries.’ A 200-personnel contingent of the Indian Army participated in Zapad multinational military exercises in Russia in September 2021 where China and Pakistan were also present as observers.

But military exercises are also inherently political. And that’s why India decided to back off from the maritime component of Vostok 2022 given Japan’s objections. Moscow’s decision to hold naval drills near the Southern Kuril Islands has raised hackles in Tokyo with Japan’s defence minister Yasukazu Hamada terming these plans as ‘unacceptable’. For the Russian Navy’s Pacific Fleet and the Chinese People’s Liberation Army Navy (PLAN), that’s the real objective – to put pressure on Japan and demonstrate a close Russia-China defence partnership.

The Tanks are Coming

Military exercises between Russia and China are now the norm with the two holding joint military exercises in north-central China involving more than 10,000 troops last year. In May, even as the Quad leaders were meeting in Tokyo, Chinese H-6 bombers and Russian Tu-95 bombers conducted joint flights around Japan and South Korea, forcing them to scramble jet fighters. With Vostok 2022, Russia is sending a message that it is far from isolated, and important nations like China and India are with it when it comes to its defence priorities. For China, these exercises are a means of strengthening ties with a major military power at a time when its new Cold War with the West is sharpening.

For India, it is a tough call. Given the downward spiral in New Delhi’s ties with Beijing, a joint exercise hardly makes any sense. Yet, the fact that it has been called by Russia makes all the difference. India is not part of the sanctions regime of the West against Russia. In fact, taking advantage of huge discounts, India has been buying oil from Russia in large quantities, making it a formidable player in the Russian energy market.

If military exercises are intended to make a statement about a nation’s strategic intent, then India should be doing a better job of communicating that. Russia and China are using the participation of the Indian forces in Vostok 2022 to underscore their priorities.

India needs to do much more to tell its side of the story. For all the hullabaloo over Vostok 2022, India conducts the largest number of military exercises and is of a much higher degree of complexity than the US. The 13th edition of the India-US joint special forces exercise Vajra Prahar 2022 concluded last month. October will see India and the US holding their regular Yudh Abhyas series of war games near the China border in Uttarakhand.

India’s military engagements with other like-minded nations such as Japan and Australia in the Indo-Pacific are also gaining momentum. So, while there may be some discomfort for Indian soldiers in dealing with their counterparts at a time when they are facing each other off along the Line of Actual Control (LoAC), that’s a small price to pay if it means keeping India-Russia ties on an even keel. But New Delhi needs to start communicating its intent better. Strategic communication is an art. It’s time to master it.

This article was first published in Economic Times as India, China are taking part in Russia’s military drill. But it’s more nuanced than that on September 3, 2022.