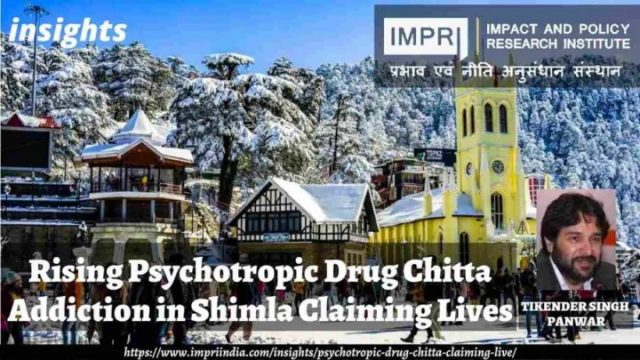 Four young men died from an overdose of the psychotropic drug Chitta—three different synthetic, adulterated forms of heroin-diacetylmorphine—in two localities in Shimla in 10 days between the end of November to the beginning of December this year. All four were less than 25 years of age.

Ashok hanged himself at home as his father was planning for his rehab. Rahul, a bus conductor, never woke up after an overdose. Satender, who was into Chitta and alcohol, didn’t wake up either. Pratap, the son of an affluent family, died similarly. (The names of the deceased have been changed).

In the last ten years, the supply and demand for Chitta have rocketed across Himachal Pradesh, particularly in Shimla, which has a population of more than 200,000 with a sizeable number of adolescents.

Shimla, known for its pristine natural beauty, is becoming a hub of Chitta consumption with frequent reports of deaths of addicted youths.

According to a recent report in a regional daily, Chitta supply has increased almost fivefold, with consumption increasing from around 3.417 kg in 2017 to 14.907 kg in 2022. A survey done on 1,150 inmates at rehabilitation centres in 2020 revealed that Chitta has beaten all other drugs, including cannabis, in demand and consumption in Himachal.

Despite a gramme of Chitta costing around Rs 4,000, several youths, including those from humble backgrounds like the two addicts who died, are consuming it. Such addicts even planned thefts at home to finance their costly addiction.

The problem was aggravated during the pandemic. Young members of nuclear families and often students who come to the city for education are major consumers of Chitta. Most of the addicts took their first dose between 15 and 20 years old.

Efforts must be made on war footing

The production-supply-demand structure of Chitta couldn’t have existed without political patronage. The new government has the onerous task of mitigating this crisis with the two-pronged strategy of law enforcement and counselling of youths.

There is no dearth of evidence that enforcement agencies have a lackadaisical attitude in enforcing the law. A special task force should be formed with adequate capacity-building exercises ensuring strict enforcement. People have been demanding more vigilance on the police’s part and setting up police posts in some of the vulnerable areas. This demand should not be brushed aside. Simultaneously, a massive drive for setting up counselling centres at every school must be undertaken with professional psychologists guiding students.

The old model of educating students using the carrot-and-stick method is redundant; instead, they should be counselled to identify what is wrong and right. The eagerness to try things upon themselves is a major driving force that is extremely detrimental to students.

With the old structures of society dwindling or having already fallen apart and the joint family almost irrelevant, drugs like Chitta have become the refuge of jobless, angry, frustrated and rudderless students and youths.

The new government should not shirk this responsibility and allow the blooming of ideas on campuses that would be a blow to the drug challenge.

One of the college principals in Shimla said, “My hostel has a capacity of nearly 200 students, but only 90 rooms are occupied. Students prefer to stay in PGs, etc., adjoining the college. Most of them staying out are into drugs,” she said.

This is a scary situation for a small city like Shimla and was one of the issues of the election campaign.

This article was first published in NewsClick as Chitta Addiction Spikes in Shimla, Psychotropic Drug Claims More Lives on December 10, 2022