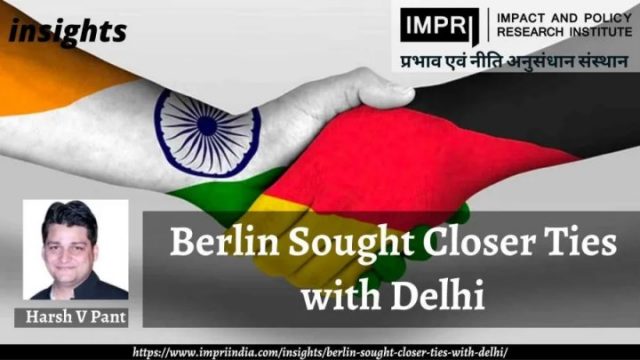 Germany is changing, its strategic worldview is evolving, and its arrival on the global stage as a geopolitical player comes with immense possibilities. This was displayed during German foreign minister Annalena Baerbock’s maiden visit to India last week. Her clear and confident articulation of Berlin priorities was in sync with expectations in New Delhi about the need for a robust India-Germany and India-European Union (EU) partnership to tackle the formidable challenges that the world faces.

That this visit came weeks after German Chancellor Olaf Scholz’s much-talked-about visit to China also underlines the effort Berlin is making to assume the role of a serious global interlocutor at a time of fundamental changes in geopolitics and geoeconomics.

India and Germany have had a productive year of high-level engagement, with Prime Minister Narendra Modi visiting Germany twice. Scholz is also likely to be in India twice next year, one for a bilateral visit and the other for the G20 summit.

In India, Baerbock discussed the Ukraine war and the climate crisis but also concluded a mobility partnership pact to make it easier for people to study and work in each other’s country. She paid tribute to India’s growing global heft by underscoring that “the clear position taken by the G20 against the Russian invasion of Ukraine is due in the end to India.”

Arguing that “there is no doubt that India will decisively influence the shaping of the international order in the 21st century,” Baerbock reiterated a growing perception globally that “as a rising economic power and established democracy, India is both an example and a bridge-builder for many countries in the world, despite its social challenges domestically.”

The argument about India’s global role is not new, but Germany’s open articulation of this view stands out. In a decisive break from its post-World War II foreign policy of caution, Germany today is at a turning point (Zeitenwende) in European history after the Russian invasion of Ukraine. Scholz was forced to confront the consequences of European reluctance to engage with the changing strategic landscape, and he had to accept that “with the invasion of Ukraine, we are now in a new era.”

This led him to announce a massive increase in defence spending as he earmarked 100 billion euros for investments for the army in 2022 to build “a powerful, state of the art, the advanced army that protects us [Germany] reliably” and reversed the ban on lethal weapons exports to conflict zones by announcing huge shipments to Ukraine. The assumption that the US would be able to serve as the security guarantor for European security forever had fallen by the wayside, and as the most significant economic power in Europe, Germany had to come to terms with the new realities.

Today’s Germany, while remaining firmly anchored in its alliances with the wider West, as reflected in the EU and the North Atlantic Treaty Organization and committed to upholding international law and multilateralism, is also willing to “from now on — year after year — invest more than two per cent of gross domestic product in our defence.” This shift has undoubtedly been spurred by Russian aggression but has also been gradually shaping up over the last few years.

In 2020, Germany became the second European nation after France to outline its Indo-Pacific policy, whose important goal was to diversify Germany’s partnerships away from China to other regional countries. Berlin followed it up by making significant symbolic moves in the region when last year, a German frigate sailed for the Indo-Pacific for the first time in 20 years, docking in 11 countries during its seven-month voyage, including Japan, South Korea, Vietnam, and Singapore. Earlier this year, Germany sent 13 military aircraft to participate in the “Pitch Black” military exercise to Australia in one of the German air force’s largest peacetime deployments.

With Germany looking to engage more substantively in the Indo-Pacific, a partnership with India becomes imperative. As two leading global economies, Berlin and New Delhi will need to coordinate more closely during global economic deceleration. The two nations must also ensure that the multilateral order remains fit for purpose when most nations question the efficacy of extant global institutions.

Germany and India have been coordinating United Nations Security Council reforms for ages, but nothing has come of it. It’s time now to move beyond formal structures to more informal frameworks that can respond to the challenges of our times. As two major democracies, Germany and India also need to push back against global disruptors in Europe and the Indo-Pacific.

Germany’s economic dependence on China makes Berlin susceptible to pressure from Beijing. Scholz’s recent trip to China was the first visit to the country by a leader of the EU and G7 since the beginning of the Covid-19 pandemic almost three years back and was the “most controversially debated visit in the country for the last 50 years.”

While it did not yield anything substantive, the German chancellor received a lot of flak from other member-States of the EU and his coalition partners, the Greens and the Free Democrats (FDP). Scholz was also criticised for being submissive to the Chinese when he overruled sections of his cabinet, the EU Commission, and Germany’s intelligence services to allow Chinese conglomerate COSCO Shipping Holdings Co Ltd to acquire a minority stake in a Hamburg port terminal.

As Germany makes an important outreach to India, New Delhi will carefully watch how Berlin deals with its economic entanglement with China.

There will also be questions about the sustainability of the policy changes that have been ushered in due to the Ukraine crisis. Yet, there is no denying the inherent logic of a robust Berlin-Delhi partnership. Baerbock’s visit has reaffirmed Berlin’s commitment to this engagement. New Delhi would do well to reciprocate.

This article was first published in Hindustan Times as Berlin bats for closer ties. Delhi must reciprocate on December 12, 2022.