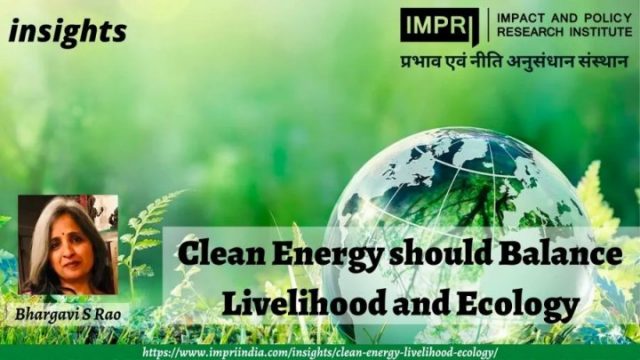 At the 27th Conference of Parties of the UN Climate Convention, or COP27, in Egypt, key documents highlighted how to meet the 2050 climate targets set in the Paris Summit. The Sharm El Sheikh Implementation Plan, VIII- Implementation-pathways to just transition, stresses the need for just solutions based on meaningful and effective social dialogue and the participation of all stakeholders with a clear focus on economic development and poverty eradication. This insight is critical to local clean ecology that supports communities and for which they must be fully onboard in decisions that affect them from the very beginning.

The Intergovernmental Panel on Climate Change (IPCC) paper titled Ten new Insights in Climate Science 2022 summarises strategic approaches to responding to climate change. This paper presents a frightening prospect of non-action, with experts highlighting that the proposed adaptation measures will be redundant if we don’t act now, given the rapidly advancing levels of global warming.

Of the ten insights highlighted by the IPCC specialists, ‘Insight 6 – Sustainable land use can make a difference in meeting climate targets’ is particularly applicable to India. It highlights how land use accounts for approximately 22% of the total net anthropogenic Greenhouse Gas (GHG) emissions and how a radical shift is immediately needed to meet goals set for 2050 net zero carbon emissions. It further stresses how land use activities need to be accounted for clearly and transparently and is included in the Nationally Determined Contributions. The section concludes that “managing land sustainability to provide food, livelihoods, clean nature, ecology and a sense of place and identity may yield the most substantial climate co-benefits”.

In a country where land is scarce and predominantly held by small landholders who struggle to retain it for agropastoral livelihood and ecology, installing utility-scale solar/wind parks in open natural ecosystems, and agricultural land presents a paradox.

While open natural ecosystems are known to sequester carbon, agricultural patches with animal husbandry are known to add to the carbon emissions. To ensure food security, clean livelihood and ecology, and eradication of poverty while promoting clean energy, striking a balance is fundamental.

Although the country has accomplished its shift to renewables at a great speed, the impact of such a stride has begun to indicate other challenges. This is at the basic level of access to food, livelihood, ecology, education and healthcare, particularly in areas where utility-scale renewables have been installed.

Lessons from Pavagada, Karnataka; Bhadla, Rajasthan; Charanka, Gujarat; Mikir Bamuni, Assam and other places fail to shape the state-of-the-art decisions in the shift to renewables. Experience from these regions has shown that while the solar parks in these regions have been able to generate power and bring profits to the developers and a return on investment for the investors, a considerable section of the local population was never part of the decisions and has been displaced from their livelihood and ecology.

This is beginning to seriously impact household-level nutritional security and has grave consequences on women, particularly maternal health, children and senior citizens. These communities are now more vulnerable to the impact of climate change than ever before. Their adaptation capability is far from being able to drift through the tide with petty compensation packages, dispossessed from their livelihood, ecology and zero food security at the household level. In addition, they also have to bear the brunt of the lack of access to healthcare, education, and mobility, to mention a few important aspects.

A total disregard for social dialogue and local people’s participation has reigned the decisions in the shift to renewables. Such a defective execution that has bypassed all environmental laws and court orders, violated provisions of the 73rd and 74th Constitutional Amendments, and disregarded the concerns of the marginalised is now about to be repeated in the Koppal district, Karnataka.

The 24-year-old district was shaped out of the Raichur district in 1998 and is known for its poor indicators. As per the 2011 Census, agriculture is the primary occupation in Koppal, and about 40.7% of its population is below the poverty line, according to the district profile. The food security index of Koppal is 0.269, making it the 28th highest in Karnataka. This is also indicative of the vulnerability to poor health. Women and children, particularly food-insecure ones, are more likely to suffer from poor health.

Against this backdrop, back in 2012, farmers had demanded that irrigation be brought to their lands to reap the benefits of a good harvest. Their dream has come close as the government promised to ensure water supply in the next three years. Due to farmer pressure, drip irrigation facilities for more than 12,000 acre was sanctioned.

Now, the region has been identified as a potential hotspot for setting up a mega utility-scale solar power park, leaving farmers divided about parting with their land. The irrigation work has progressed, but the solar park’s lure has left some farmers perplexed with glorified stories from real estate brokers and developers about such parks.

During a recent visit to Koppal, a small fraction of farmers who understand the long-term implications of parting with their land are worried that their children and grandchildren will not have agricultural skills, know what was grown there or even be able to identify where their lands were located. They are concerned that parting with the land will leave a large section of the population unemployed and drive the district’s indicators of food security and poverty further down. Farmers also fear that the lack of farm-based livelihoods will result in lethargy, substance abuse and increased vulnerability to engage in anti-social activities.

They are worried that not every farmer who parts his land will be employed with the solar park. The fear stems from what they know of the Pavagada solar park and its consequences for the locals. Farmers are certain that no effort was made to build the skills of the local population to be part of the solar park industry. They foresee how the parting of the land will break families and the region’s social fabric. Their fears are amplified by the added concern of not finding marriage prospects for the youth, given the lack of assets in households.

Farmers are also aware of their inability to fight big companies, as litigation is very expensive. “What will we eat if we give away our land?” asked one farmer. Their worst fear is that a company(s) will take a loan with their lands as collateral.

According to them, the companies plan to take a loan of Rs 2.8 crore for every four acres by getting a general power of attorney from the original landowners. Farmers fear that they may continue having land ownership on paper but will lose their rights to companies. They believe they can lead a decent, dignified life even with just two acres.

“If we keep chasing fuel and trading our lands, we will have no food. We can survive without fuel but not without food,” a farmer said. They also fear it will adversely impact the local wildlife harmoniously coexisting with rural livelihood. They fear solar parks will cause irreversible damage to the land and ecology and impact wildlife, which is integral to the region.

Farmers underscore the 73rd Constitutional Amendment provisions and claim that setting up renewable energy is the Panchayat’s function. “Non-conventional energy sources” is one of the 29 functions in which the distribution of powers between the state legislature and the Panchayat is enshrined in the 11th Schedule.

Farmers question the need for utility-scale solar parks at the cost of food security, livelihood, and disturbance to the local ecological landscape and well-being. They are not against renewable energy; they believe solar energy has to coexist with agropastoral livelihood in a decentralised fashion where the Panchayat, in consultation with local communities, can envision alternate models keeping in mind the question of land use in meeting the 2050 targets.

It is high time for the Ministry of Environment, Forest and Climate Change to revisit the decision of the exemption given to solar parks under the provisions of the Environment Impact Assessment notification, 2006. The shift to solar energy needs a comprehensive reimagination at all levels of decision-making, and the IPCC insights could be the foundation to steer the much-needed action.

This article was first published in NewsClick as Clean Energy Promotion Should Strike Balance With Livelihood, Ecology on December 12, 2022.