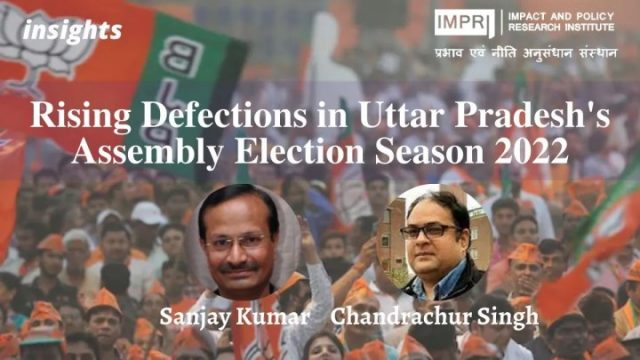 Come elections, and defections and desertions become the flavor of the season. The assembly elections in Uttar Pradesh (UP) and four other states aren’t exceptions. Over the past few weeks, senior Bharatiya Janata Party (BJP) minister Swami Prasad Maurya and 13 other lawmakers have defected to the Samajwadi Party (SP) and its allies. The Opposition says this is a sign that the “Hawa” is blowing in its favor. The BJP paints the rebel legislators as habitual defectors.

In West Bengal last year, around 34 Trinamool Congress (TMC) leaders crossed over to the BJP. At the time, the narrative suggested the defections proved the momentum was with the BJP. But when results were declared on May 2, the TMC not only won more seats than in 2016 but increased its vote share by about three percentage points to 48.02%. The BJP, too, improved from a mere 10.16% vote share in 2016 to 37.97%, but fell far short of a majority.

In light of these takeaways, the defections in UP may be seen as not of much consequence. One can also argue that they could have been triggered by the BJP’s intention to drop many sitting legislators to defy anti-incumbency. After all, the percentage of successful first-timers has been on the upswing — the number rose from 66% in 2002 to 69% in 2007, 71% in 2012, and 78% in 2017. Additionally, the compulsion to accommodate new grassroots aspirations could also add to the dissension.

But, the ground realities of UP — India’s most populous state with 80 Lok Sabha seats and 403 assembly seats — are not the same as Bengal. Three factors make these defections a significant factor in the election season.

First, though the long-term impact of these desertions will be known only after the votes are counted on March 10, in the shorter run, it may help in building a narrative that the SP is emerging as the principal challenger to the BJP. To be sure, these narratives may not have any correlation with electoral outcomes, but they may help the SP mobilize some floating voters. Our data shows that around 25% of the electorate make up their mind at the last minute and often go by the popular narrative on the ground — the so-called hawa or mahaul. If the BJP loses more lawmakers, it may help steer the momentum in favor of the SP.

Second, the SP has, so far, failed to convert issues such as unemployment and the price rise into a formidable poll plank as the BJP focused on the larger narrative of Hindutva by constantly invoking the issue of the Ram Mandir or new temple projects in Kashi and Mathura. But now, such issues may get a second lease of life, allowing the SP a spring in its step.

Finally, one should not forget that the defecting MLAs belong to the non-Yadav Other Backward Class (OBC) groups and their joining hands with Akhilesh Yadav, may strengthen the social coalition of Yadav-Muslims and lower OBC castes, a combination on which the SP and its allies are banking on. It may also broaden the SP’s appeal beyond its traditional base.

Lower OBC castes voted for the BJP in large numbers — 61% in the 2017 assembly elections and 74% in the 2019 Lok Sabha elections. The defection of these MLAs would certainly dent the BJP’s support base among lower OBC castes.

The presence of both overlapping and cross-cutting social cleavages in India means that parties have to be continuously in action mode for their identity and survival. It is not surprising, therefore, to see intense rivalries and competition to be seen as the most legitimate or identifiable grouping of any particular social cleavage – caste, religion, ethnicity, or something else. After all, the rewards of occupying offices are so high that it trumps all other moral-ethical or even ideological considerations. When politics becomes transactional, defections and desertions also become the norm.

The article was first published in The Hindustan Times In UP, why defections are a significant factor this election season on January 24, 2022.

Read another article by Chandrachur Singh on the CBSE education model titled CBSE Evaluation Model: Setting Up Post-Result Grievance Redressal System Is A Must in IMPRI Insights.

Read another article by Chandrachur Singh titled An era of new-age school assessments in IMPRI Insights.

Sanjay Kumar is a professor at, the Centre for the Study of Developing Societies.