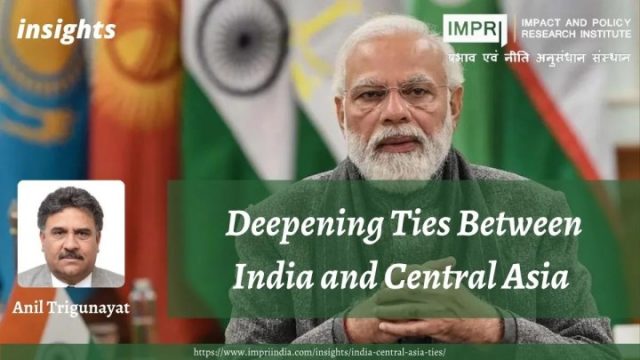 On January 27, PM Modi will be virtually hosting the leaders from Central Asian countries (CARs) in a first-ever Summit as they celebrate the 30th anniversary of the establishment of diplomatic relations. C5 constitutes Kazakhstan, Kyrgyzstan, Tajikistan, Turkmenistan, and Uzbekistan and has a historical and civilizational connection with India which is not a cliché. The leaders were supposed to be the Chief Guests on Republic Day — a unique honor bestowed on special friends. But the prevalence of pandemics turned it into a virtual meeting. No less significant.

Despite the proximity, connectivity has been a major constraint in enhancing and deepening the ties due to the geographic and geopolitical construct of the region. Even though India had launched her “Connect Central Asia Policy” in 2012 and hosted all the leaders post their separation from the Soviet Union in the 1990s but sparse and ad hoc collaboration followed, the visit of PM Modi in 2015 to all the C5 was a prime mover that in many ways laid new foundations for an ever-widening collaborative matrix.

This Summit and several important interactions including the NSA hosted a dialogue with his counterparts along with from Russia and Iran in November in the context of developments in Afghanistan and third dialogue hosted by the External Affairs Minister on December 21 with his counterparts have all been critical in defining the contours of future and ongoing collaboration between the two. It is expected that the Summit level interactions will be institutionalized at a biannual frequency.

The relationship is moving within the ambit of 4Cs — underscoring commerce, capacity building, connectivity, and contact — that encompass the contours of security and terrorism, trade and economy, development partnership, energy security, healthcare, and climate change.

The objectives can be predicated on 3Cs — Connectivity unhindered; Counter-Terrorism unabated, and Critical commerce and supplies unimpeded both ways. These imply strategies to overcome the hiatuses caused by strategic rivals like China and Pakistan with their Afghan conduit. How to ensure these under the given geopolitical and geo-economic contestations is a challenge that needs to be countered perhaps in collaboration with regional powers like Russia and Iran.

India’s focus on developing defense and security ties, even more, is evident from the fact that we have Defense Attaches in all five countries. Current levels of trade at $2 billion are low compared to the Chinese and others. However, India has extended a Line of Credit of $1 billion to help expand ties across the spectrum from defense and security including energy and TAPI, minerals like Uranium to infra to trade, healthcare, services sector including ITCT and Fintech and developmental projects in C5 — which if efficiently deployed with time bound delivery targets could be a game-changer.

Greater investments in Chabahar port and its integration with the International North-South Transport Corridor (INSTC) as well as Free Trade Agreement with the EAEU (Eurasian Economic Union) could provide the requisite connectivity until such time that Afghanistan is stabilized.

Central Asia will remain a zone of competition among Russia, the West (including US and EU), China, Turkey, Iran, and India — be it geopolitical, geo-economic, or geo religious contestation. What happened in Kazakhstan is a mere trailer or a snippet of what are the real fault lines of the CARs. Colour Revolutions are not yet passé in the region. C5 is Going through churn and turmoil. Terrorism and Extremism are well-ensconced and with the onset of the Taliban are far more accentuated.

Youth bulge and uneven distribution of wealth and unmet expectations combined with high-level corruption have been the causes of public unrest and need to be addressed by the respective leadership with the right kind of inclusive reforms. Regional stability and reliable connectivity will be directly dependent on popular satisfaction and support.

Competition is the key underlying dimension of the region since they achieved independence in the 1990s post demise of the Soviet Union. This has been displayed in competition for influence — Russia’s backyard which was recently reasserted during the Kazakh crisis when Moscow sent in peacekeepers under the rubric of CSTO.

The West, especially the US looking for help in its ‘Over the horizon’ advent in Afghanistan from where its hasty exit has created more problems for CARs. China ( having long borders ) remains a geo-economic giant with its expanding BRI footprint and quest for energy and minerals. The region also remains a geo religious contestation for Turkey (Including Turkic identity), Pakistan, Iran, and Saudi Arabia. Afghanistan has become an important pivot for nearly all the external actors in the region.

China’s severe debt burden and aggressive approaches as well as the Uyghurs issue all have the potential for its backsliding in the game but for that credible economic alternatives and security choices have to emerge. As of now, Russia-China provides it. Hopefully, India will find a way to provide the third alternative that C5 is looking for.