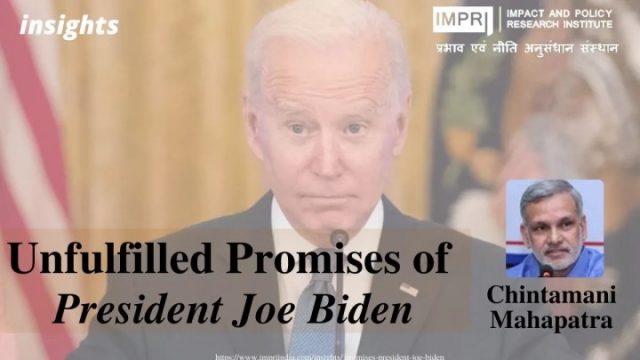 At the time of the 2020 election campaigns as well as in his inaugural speech, Biden made several promises to the American electorate, but most of them have remained unfulfilled. He vowed to reunite the country that was getting polarised by the day, but there is no sign of unity in American society.

One can understand the rivalry between competing political parties and the stark ideological differences between the Trump-led Republican Party and the Biden-led Democratic Party. But division within the Democratic Party in less than a year of the Biden presidency spells harder times ahead. The reason why President Biden failed to achieve Congressional approval to his social infrastructure agenda in the form of the “Build Back Better” bill is the resolute opposition by two important members of the Democratic Party — Joe Manchin and Sinema! In fact, many members of the Democratic Party appear uncomfortable with Biden’s tilt towards the progressive Left despite his long-standing reputation as a centrist and a Congressional dealmaker.

Second, Biden had promised reforms in the Criminal Justice System, Police Department, and Immigration policy. None of those witnessed any positive movement in the last year. Perceived racial discrimination in the American criminal justice system, periodic police brutality, and suffering of the potential immigrants at the Mexican borders are very much in place and media highlights are there for all to see.

Third, Biden made all-out efforts to get a bill passed to do away with voter suppression practices, expand and facilitate voting rights of minorities, especially the African-American community, but these are all but dead in the US Senate. He went to the extent of supporting an initiative to bypass filibustering or even amending the filibuster rules in the Senate, but his own party seemed hesitant to back such ingenuities.

While Biden used his political skill to obtain bipartisan support for the $1.9 trillion COVID-19 Rescue bill and the $1.2 trillion infrastructure bill, why did he not walk the extra mile to get Congressional endorsement to his social agenda?

This is the question that dominates the minds of those 54 percent of the voters who have expressed their disapproval of Biden’s performances in various opinion polls. Significantly, the approval rating of Donald Trump after his one year in office was higher than that of Biden’s.

Those who view the above three trillion dollars of budgetary approval as the success of Biden’s economic policy and also complement 6 million job creation in 2021 fail to grasp the popular discontent over 7 percent inflation in the economy — a 40-year high inflation rate. Furthermore, when Biden entered the White House, the US national debt was $27.8 trillion and after his one year in office it rose to $29.8 trillion.

Fourth, while Biden’s difficulties in keeping his promises regarding handling the Covid-19 pandemic is understandable, American people still fault him for declaring victory over Covid-19 in July last year and hold him responsible for the long queues at testing centers and inadequate supply of home testing kits even now. Biden has also been proven ineffective in providing international leadership to wrestle with the ongoing pandemic.

In addition to unfulfilled promises, President Biden has not lived up to the expectations of the international community, especially allies and partners during his first year in office.

First, he repeatedly announced that “America is back” in multiple forums, but there is consternation over the perceived US withdrawal from the Middle East. It all began with the hasty, unilateral and incompetently designed withdrawal of US troops from Afghanistan.

While he fulfilled his assurance to end the “never-ending war” in Afghanistan, Biden left behind a humanitarian crisis of unprecedented proportions in that country. American legislators, bureaucrats, sections of the Pentagon, and even common people did not want the end of US military intervention in Afghanistan the way their President did. They all looked on with bewilderment when 13 US military personnel were blown up in a bomb explosion executed by the Taliban in Kabul. The NATO allies were neither consulted in time nor were strategic partners like India before the US troops would make the final departure from Afghanistan.

Second, post-Trump era, President Biden desired to restore the language and spirit that guided the US relationship with allies and partners for decades, especially in the trans-Atlantic alliance. It was essential in the context of reprehensible treatment meted out to allies by his predecessor if only he would lead the US reappearance to play a constructive role in world affairs.

However, expectations of the NATO allies were belied when Biden concluded a new security alliance in the Indo-Pacific known as AUKUS or Australia, UK, and US grouping. France was furious even as it lost billions of dollars of contracts with Australia to produce submarines and described it as a “stab in the back”.

Many NATO members and even the EU members sympathized and sided with France and were unhappy with the US behavior. While Japan and India maintained deliberate reticence, the disquiet in New Delhi and Tokyo did not go unobserved. Both Japan and India had only recently joined Australia and the US in pushing forward Quadrilateral Dialogue Initiative or QUAD and unpredictably watched the popping up of a new trilateral grouping!

Third, Biden addressed the expectation of the international community by promptly re-joining the Paris Climate Accord but miserably failed at home. The Build Back Better bill that included more than $500 billion of schemes to address the climate-related issues did not get Congressional approval. How his administration is going to provide leadership in addressing climate change issues is anybody’s guess.

Fourth, Biden desired to reset the relationship with Russia to manage the strategic challenge posed by China in the Indo-Pacific. But there are now war clouds over Europe with frightening rhetoric emanating from Washington and Moscow over developments in Ukraine. Biden may put the onus on Russian strongman Vladimir Putin for the tension, but the world wants results from him in dealing with an assertive and aggressive China.

Fifth, Biden vociferously announced his intention to handle the Iranian nuclear issues with renewed negotiations, but it has gone nowhere as he ends one year in office.

Last but most important, Biden has continued his predecessor’s tough measures to manage the challenges posed by Beijing in the Indo-Pacific. He has sided with India over China’s muscle-flexing along the Sino-Indian border, he has warned Beijing against any military move to annex Taiwan, he has opposed Chinese naval activities in the South China Sea, he has assured support to Japan against Chinese activities around Shenkaku Islands, and he has teamed up with Britain to build nuclear submarines for Australia.

But there was no sign of China feeling threatened by Biden’s postures and gestures. President Biden needs to do more in concrete terms to reassert the US position in world affairs and try to prevent the rise of a self-centered and aggressive hegemon.

The article was first published on Firstpost Of promises unfulfilled and expectations belied: President Joe Biden’s disappointing year in office published on January 27, 2022.