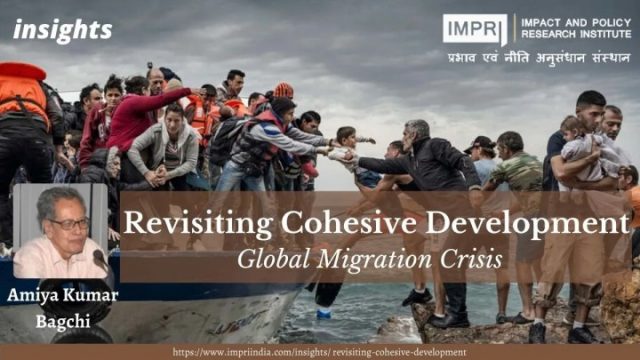 Cohesive development requires that human beings would cohere with one another, that they should live in harmony and thrive in health, education, cognitive development and have opportunities for doing the kind of work they like – being a worker in fields, in factories, in kitchens, in administration, in scientific investigation, in music, in plastic arts and so on. Cohesive development also means that human beings should respect the boundaries of nature which they cross at their own peril and the peril of other living beings on earth.

All the major countries of Europe and the USA have an imperialist past, and they have continued to use their superior economic and military power against the ex-colonial countries whenever it suited their own interest. Take, for example, the US-led NATO aggression against the oil-bearing Middle Eastern counties, Iran and Iraq, and after 9/11 ‘the war against terror’ in Iraq and Afghanistan. Up to 2020, that war caused the displacement of 37 million people and still counting.

Then NATO intervention for regime change in Libya and Syria caused enormously blood-letting civil wars. The Saudi-backed armed intervention in Yemen against the Houthis has caused probably the greatest humanitarian crisis in recent times. Then there was NATO intervention in the civil war between the different components of Yugoslavia after the demise of the Tito regime.

Finally, the continued exploitation of the huge mineral resources of the Democratic Republic of Congo and other mineral-rich African countries by companies from the imperialist countries caused the displacement of huge numbers of people and fed the streams of internal migrants and migrants heading towards Europe. But Fortress Europe would accommodate only a trickle, so thousands of the would-be immigrants met a watery death in the Mediterranean.

A similar story can be told about the US migration crisis. Ever since the proclamation of the Monroe Doctrine, the United States regarded Latin America and the Caribbean as its backyard. Not only would it tolerate any outside power to poke its nose into Latin American affairs but it wanted all the rulers of those countries to dance to its own tunes.

Beginning with removing the removal of Gustavo Arbenz, the democratically elected government of Guatemala to that of the support for the coup that dismissed President Manuel Zelaya of Honduras, the USA has demonstrated that it would remove any ruler who either talked about land reforms or wanted to move against the profiteering transnational companies.

Moreover, in its long campaign against the Sandinistas of Nicaragua or in its continuing war on drugs, it has armed numerous gangs in all the countries of Central America, the Caribbean, Mexico, and Colombia. These gangs are so powerful that they can assassinate a president of Haiti, the succeeding president has to file for fear of life and in Mexico, the police are afraid to openly move against drug lords.

All these factors lead to surges of would-be immigrants to the United States, and with walls against them in the US border, many die trying to swim across the Rio Grande or the deserts of Arizona or deserts of North Mexico. The only country which has refused to fall into this war of terror conducted by the USA is Cuba, which is why, defying all tenets of international law and with the cowardly consent of other countries, the United States has imposed ever more stringent sanctions against Cuba.

First presented at The Role of Equality for Cohesive Development #WebPolicyTalk on 19th January 2022.