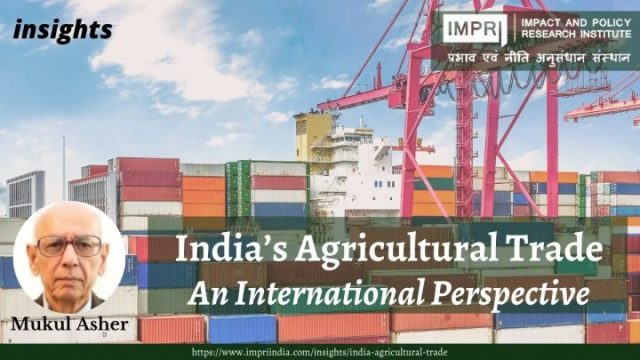 Accelerating exports of agriculture products, and reducing their import dependence are among the key priorities for India. The agricultural sector’s export potential, which is considerable, has in the past not received sufficient policy focus and has not been approached in an integrated manner. But recently this limitation is being addressed in an energetic and competent manner as India is determined to pursue the external sector as one of the key pillars of Atmanirbhar globalization.

Sharply enhancing India’s agricultural exports is also consistent with India’s strategy to increase its soft power as it underlines India’s ability to be a reliable and trustworthy supplier of key products needed for food security. India’s Atmanirbhar and Be-vocal-for local strategic concepts applied to agriculture are thus designed to enhance India’s relevance to the world.

The following observations may be made from the data in Table 1.

The above figures suggest that it is the high income countries that are major global traders in agricultural products and that there is considerable intra-industry trade in agriculture products. The use of agricultural technology and branding plays a major role in global agricultural trade performance.

In 2019, India was ranked by WTO as the ninth-largest exporter of agricultural products in the world, the first time it was ranked among the top 10 countries2.

India hopes to improve this rank further as currently processed and branded agriculture products share is relatively low. But with initiatives such as 22 mega food parks already operational and diversification into fisheries and other areas, as well as efforts at greater market access through technology and strategic diplomacy. Share of processed and branded agricultural products, where value addition is higher, is expected to grow.

The Mega Food Park program aims at providing a mechanism to link agricultural production to the market by bringing together farmers, processors, and retailers so as to ensure maximizing value addition, minimizing wastage, increasing farmers’ income and creating employment opportunities, particularly in the rural sector.

The Mega Food Park program is based on the “Cluster” approach and envisages creation of state of art support infrastructure in a well-defined agri/horticultural zone for setting up of modern food processing units in the industrial plots provided in the park with a well-established supply chain.

There are positive signals that the recent initiatives relating to the agricultural sector are in the right direction. As an example according to the Arab-Brazil Chamber of Commerce, in 2020, India became the largest food supplier to Arab nations, overtaking Brazil, a major global agricultural exporter.

Global supply chain disruptions and India’s close geographical proximity to the Arab nations contributed to this outcome. Brazilian shipments to Saudi Arabia that once took 30 days could now take up to 60 days, according to the Chamber, whereas India’s geographic advantages allow it to ship fruits, vegetables, sugar, grains and meat in as little as week.

India’s developing strategic partnerships with Arab nations such as the UAE and Saudi Arabia, and its domestic initiatives, could continue India’s prominence as food supplier to Arab nations.

India is also taking initiatives to reduce the extent of imports of oilseeds, and palm oil which forms a large share of its agricultural imports. Thus, India imported 8.5 million tonnes of palm oil in 2021 but is projected to decrease to 8.1 million tonnes due to rising domestic production4.

Absolute size of total exports and imports  are also relevant

In analysing a country’s global contribution and integration, the absolute size of total international trade is also relevant.  UNCTAD (United Nations Conference on Trade and Development) estimates that global trade in merchandise and services was USD 25.2 Trillion in 2019.  India’s total international trade of around USD 1.2 billion is therefore about 4.8 percent of global trade, a non-trivial share.

Table 2 provides estimates of merchandise plus services exports to selected countries for 2021. The following observation may be made from the data in Table 2.

India’s recent initiatives such as the PLI (Production Linked Incentive) schemes for various sectors, including electronics, semiconductors, textiles, telecom equipment, automotive sector and durable household goods are likely to reduce the gap between India and those countries which have much higher exports and widen the lead with others. These initiatives will also help address overdependence on the China-based global supply chain of key products and materials, thereby enhancing India’s resilience and relevance.

India’s recent initiatives in the agricultural sector are expected to enhance its role as an agricultural exporter contributing to food security of a significant number of countries as a reliable and trusted economic partner. While India usually exhibits large overall merchandise trade deficit (it was USD 162 billion in 2019), it exhibited a trade surplus of USD 12.2 billion in 2019 in agricultural products. The prospects are for this surplus to become larger due to recent policy initiatives designed to make an external sector one of the important pillars of Atmanirbhar globalization.

The column has also argued that the absolute size of global trade of a country should matter in assessing a country’s contribution to and integration with the global economy. In 2019, India’s global trade share at 4.8 percent was indeed non-trivial, and there is room for optimism that India’s share will exhibit a rise.