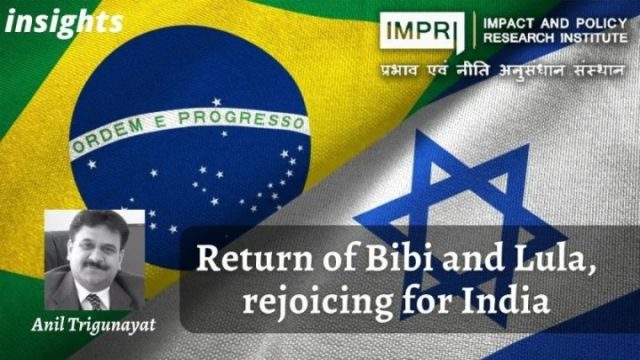 Max Weber subscribed to the theory of the circulation of elites which entails that major political actors keep power among themselves. This has been once again proved in the recent elections in Brazil and Israel with a difference that Brasilia will have its leftist President in Lula DA Silva and TelAviv will have a hard-core conservative and even ultra-right political dispensation led by Benjamin Netanyahu fondly called ‘Bibi’. Both contested bitter and venomous elections against their equally strong adversaries but their return has generated mixed reactions across the political and ideological divide.

However, times have changed and so have the challenges both domestic and international for these countries. Hence the returnees may have to deal with them upfront from domestic discord to adverse impacts of the pandemic and the Russia-Ukraine War, especially on the economy and employment. In the case of Israel, it is the security, Palestine issue, and threat to Jewish identity that took precedence for voters’ preference, despite the fact that Bibi is mired in corruption cases and scandals.

While India is well placed in these important political developments. With Brazil, India has excellent bilateral relations and the two cooperate in BRICS, IBSA, and G20 among other institutions. President Lula during the early 2000s was instrumental in the closer engagement with India and the establishment of BRIC which he wanted to craft a new world order. But given the whole gamut of relationships, Lula, might meet PM Modi on the sidelines of the G20 Summit at Bali. He would in any case be a guest at the 2023 Summit in New Delhi apart from BRICS and IBSA meets, which will be an opportunity to take the relationship across the spectrum into a higher gear.

Bibi too is a great friend of PM Modi and they enjoy excellent chemistry. Hence it is back to old times. PM Modi visited Israel, the first ever by an Indian Prime Minister, in 2017 to celebrate the 25th anniversary of full diplomatic ties which Netanyahu has hailed as a wait for 70 years. Under Bibi, India will likely remain a priority country, both bilaterally and through multilateral and plurilateral formats like the I2U2.

PM Modi, while thanking Yair Lapid for his priority to strengthen the India-Israel strategic partnership, welcomed the electoral success of Netanyahu with an Israeli salutation. He tweeted— “Mazel Tov my friend Netanyahu for your electoral success. I look forward to continuing our joint efforts to deepen the India-Israel strategic partnership.” The relationship with India— the largest democracy and a benign power and Israel the strongest country in the Middle East –is given both at political and P2P levels irrespective of the swinging fortunes of the political parties.

However, one of the most consequential relationships for both Brazil and Israel is with the USA. The US may be happier with the re-emergence of Lula despite his leftist credentials since Bolsonaro’s policies and Trumpian statements were often much to their discomfort.

Well, Bibi’s return may create some unease in Washington DC, if his saga during the Obama era were to be repeated but for Israel, despite the indirect power the Jewish lobby in the US wields over the US politico-economic spectrum, it remains Tel Aviv’s firmament of security guarantee. Bibi might be perhaps more mindful of US President Joe Biden’s sensitivities including discussions and criticism over the JCPOA deal not to be shouted out in the public domain as Gentz and Lapid had done.

Tehran and Tel Aviv are knotted into a mutually destructive syndrome and consider one another an existential threat. Besides, the West Bank, the status of Jerusalem, and larger Palestinian issue will continue to be a talking point even as Bibi is expected to take a hard-line security-ridden approach towards the whole issue which may further accentuate tensions and conflict with Hamas and Gaza in particular and Ramallah in general, including Arab alienation within and Intifada from outside.

The Biden administration would perhaps take an early lead to spell out if they indeed wish the Palestinian issue to not cause yet another regional conflagration and consequent setback to the Abraham Accords venture which they have tried to advance through the recent Lebanon-Israel deal by being a guarantor.

Meanwhile, both leaders have a task cut out for them for want of a decisive victory as their countries stand divided by the middle. Healing touch and addressing domestic challenges will keep them engaged for some time as they grapple with international challenges as soon as they are in the saddle.

This article was first published on moneycontrol as Why India Should Rejoice return of Bibi and Lula? on Nov 5, 2022.