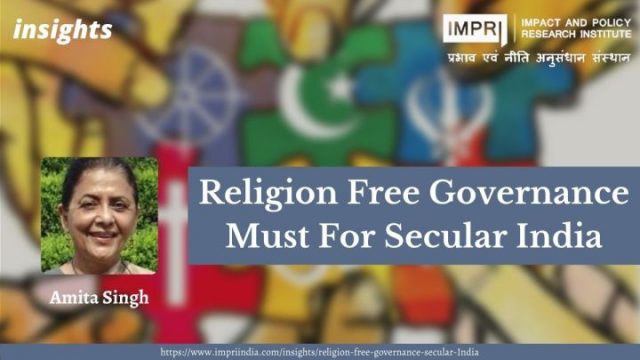 A question that has perplexed public and political life since ancient times is about the role of religion in governance. Indian Constitution had been far ahead of many decolonized nascent peer republics post-World War II in firmly instituting ‘secularism’ in the pride of place ‘The Preamble’ that it deserved.

Secularism also falls in line with the legitimate enlightened interpretation of ancient Indian scholar of state-craft, Kautilya (350-275 BCE) who candidly wrote that every King’s primary responsibility is towards the economic well-being of his subjects and in doing so, nothing else should come in the way. In the third book of his comprehensive work Arthaśāstra, he writes, ‘A matter of dispute has four feet— law, transaction, custom, and royal edict; (among them) the later one (royal edict) supersedes the earlier one’ and he holds no doubts in claiming that, ‘royal edict supersedes established religious law and custom’.

The failing of the ecclesiastical authority in their ability to interpret supernatural order and their disability on preventing anarchy in community structures of society was well debated by scholars of enlightenment like John Locke and highlighted in manifold expressions of the founding father of the American Constitution, Thomas Jefferson. Jefferson had no qualms about ‘inalienable rights of life, liberty, and pursuit of happiness’ to be achieved by what he coined as, ‘wall of separation between church and state.’ It is strange to witness a contemporary strategic turnaround in Indian governance to be closely working in collaboration or in the subordination of same leaders of religious organizations which have a proven record of suffering from serious deficits of world view both on state authority or of jurisprudential concerns which construct stable societies.

What Marsilius of Padua wrote in his 1324 book, Defensor Pacis about the Church, which should legitimately be a congregation of faithful and not of priests, has become a concern for the faithful Hindus of today. The secular and liberal Hindu way of life which evolved through centuries of self-criticism is being narrowed down to the edicts of these organizational (Mathas, Peethams & Ashrams) priests. In the recent Hindu festival, Diwali, the worst form of this psyche manifested itself when those opposing firecrackers due to environmental concerns were discounted or hounded as non-Hindus. Faith drops dead before religious guillotines which have now become part of Indian governance.

State authority ought to be secular, not for the fact that it is prescribed in the Constitution or that it has become a weapon of opposing RSS-backed BJP regime, but for our progress. Secularism is not just political and social expediency but a need for survival of all the unique richness of what we call ‘India’. I fail to understand, how can the sophisticated Rubina born as my neighbour in Moradabad or Naheed’s family that fed me Senwai and Dahibara on Eid, or the mischievous Nishat growing up together in Lucknow become two nations in our later lives? It is preposterous to even think that these Indian Muslims who mostly disliked Muhammad Ali Jinnah for his illogical two-nation theory, as well as his origin in Gujarati Khoja Shia Muslims (later changed to Sunni), could be mocked for being supporters of Jinnah.

For all practical purposes and from ethnographic logic, Jinnah would be closer to our Gujarati leaders than to the Muslims of UP and Chandni Chowk. As it appears, this ceaseless reverberation of ‘muslims as anti-nationals’ and Hindu supporters of Muslims as ‘Urban Naxals’ is a form of ‘Apaddharma’ (apada+dharma or dharma during the emergency) to use a term from the narratives of the present regime. This deviant metaphor of Dharma (truth, selfless-ness & morality) and Adharma (amoral hedonism) has now seeped through every institutional capillary of the state circulatory system.

The Twelfth Book of Epic Mahabharata Śānti parva or the “Book of Peace” mentions Apaddharma which justifies many wrongs. A story from Chhandogya Upanishada (8-6 BCE) explains it better. ‘Ushakti was starving due to drought and famine in his area. He walked towards better villages in search of food. On way, he found a man-eating something. He begged to have some but the man refused as he had already eaten through it. However, on repeated pleadings, that man gave his half-eaten food to Ushakti. After Ushakti finished eating, the man offered him water from his clay pot but Ushakti walked off in a huff saying that to save his life he ate his half-eaten food but now that he can manage why would he drink from his used water pot’. This Appadharma which justifies discretionary use of state machinery to arrest, punish and imprison citizens for the sake of what is believed to be dharma for the nation, is a dangerous trend in governance which camouflages the nation’s million ailments waiting to be treated through sustainable socio-economic tools.

Secularism is embedded in Indian life and culture with much shorter anecdotes of communal disharmony over a larger-than-life canvas of composite culture. It has survived through the rise and fall of ancient Indian Kingdoms and the works of revered Kautilya and his depiction of ‘Secular State’. Kautilya’s state is borne out of his rationalist thinking in which creating avenues of employment to all inhabitants irrespective of their graded position in the State. The concept outshines his famed book and is better handled by transdisciplinary scholars who are well versed in ancient history, Sanskrit, Social Sciences, and Warfare. Religion and theology have always been a diversion from current problems. Indian scholarship on secularism is well acknowledged by the most notable scholars of the West.

In the early 20th century, a leading social scientist on bureaucracy, Max Weber in The Vocation Lectures (2004, ed. D. Owen and T. Strong ) attributed to Kautilya’s Arthashastra the claim to be the first classical formulation of Machiavellianism. Further, Roger Boesche (2002) took pride in calling Kautilya the First Great Political Realist. Something has gone wrong about such cherished ideals which are now gradually fading out only to be substituted by a militant theological state?

The realist of modern India ‘Sardar Patel’ emphasized secularism as an unassailable political ideal of independent India. In the letters exchanged between him and many contemporary political leaders as obtained from Navjivan Trust Ahmedabad (Durga Das 1972), he has written that anything other than secularism was a pernicious idea to weaken the country. In one of his speeches in the Constitution Assembly, he made it clear that, ‘it was in the interest of all to lay down real and genuine foundations of a secular state in India as if there was only one community’ and later added that, ‘in the long run it is in the interest of all to forget that there is anything like a majority and a minority in this country.’ Patel’s displeasure with RSS was quite open when he rejected and dismissed it for its non-allegiance to the Indian flag and Constitution.

In his meeting with Golwalker in 1949, he did not mince his anger in instructing him to eschew destructive methods and adopt a constructive role, particularly the suicidal policy of the Savarkar Group of which Godse, the assassin of Gandhi was an exponent. There are many letters exchanged between him and Nehru where Patel seems to be a stronger proponent of Secularism and how it needs enforcement. One of his greatest tools for enforcement of secularism was an apolitical civil service, independent from politics but with strong Constitutional safeguards since they are needed to provide their correct and fearless opinion to the Minister. At one point he is observed to have said, ‘Today my Secretary can write a note opposed to my views. I have given that freedom to all my Secretaries. I have told them, ‘if you do not give your honest opinion for fear that it will displease your Minister, please then you better go. I will bring another Secretary’. I will never be displeased over a frank expression of opinion.’

Read another piece by Amita Singh titled Uttarakhand Floods: Easy to Point Finger at Climate Change, But Humanity is Equally to Blame in IMPRI Insights

The author is president, NDRG, and former Professor of Administrative Reforms and Emergency Governance at JNU. The views expressed are personal.