Home Insights Behind the facade of civility, the reality of the US-China dialogue –...
Facebook
Twitter
WhatsApp
Linkedin
Email
Print 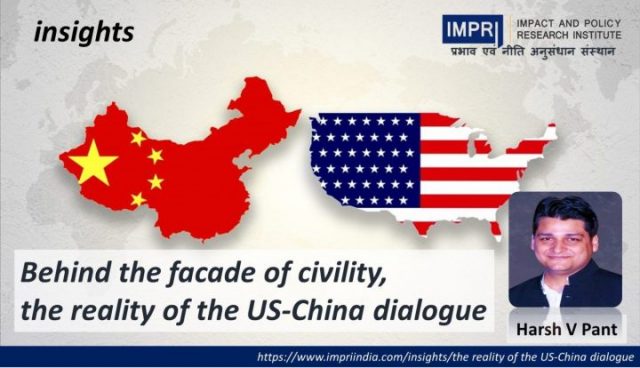 China sees itself as a power that has risen to become a peer of the US and wants its place under the sun, in the process unmasking its aggressive intent. The US is trying to push to retain its pre-eminent global status.

The leaders of the two most consequential global powers have finally found time to have a virtual summit. United States (US) President Joe Biden and Chinese President Xi Jinping had their much-awaited summit this week and indulged each other, with neither side revealing its diplomatic cards fully.

The shadow boxing between the two powers in recent years has been reminiscent of the Cold War shenanigans of the US and the erstwhile Soviet Union. But the fact that the Biden-Xi summit happened at all can be viewed as an achievement given the dramatic decline in their bilateral ties. Compared to the recriminations that flew around when officials of the two nations met earlier this year in March, the presidential conversation seemed more civil.

The two leaders reminisced about their past relationship, with Biden suggesting the two had “always communicated with one another very honestly and candidly,” and adding “we never walk away wondering what the other man is thinking”. Xi was happy to see his “old friend” Biden and called for the “need to increase communication and co-operation” as “humanity lives in a global village, and we face multiple challenges together.”

This façade of civility could not hide the fact that the two nations were entering a dangerous phase in their bilateral relationship as the structural reality of a power transition has begun to shape their moves and counter moves vis-à-vis each other.

China, under Xi Jinping, sees itself as a power that has risen to become a peer of the US and wants its place under the sun, in the process unmasking its aggressive intent. The US is trying to push to retain its pre-eminent global status, struggling to retain strategic coherence amid domestic dysfunctionality. Both know that how they deal with each other will define their nation’s future global role.

For both leaders, domestic concerns have risen in recent months. Biden’s honeymoon period ended just as soon it began. His poll numbers are falling, the Democrats are divided and recent elections have rejuvenated the Republicans. Economic news coming out of China is not all that great at the moment, and the world is pushing back against the country on a number of fronts. Though Xi has not left China in nearly two years, he came to the summit after the key Plenum of the Communist Party of China (CPC) last week ratified his absolute control over the party as its “helmsman”, making him the second most powerful leader in the country’s recent history after Mao Zedong.

In the three-and-a-half-hour summit, Biden touched upon a range of contentious issues such as human rights abuses against the Uyghur minority in the western Xinjiang Province and in Tibet, Chinese aggression toward Taiwan and trade issues — all we are told in a spirit of “healthy debate”. He underlined the “need to protect American workers and industries from the PRC’s [People’s Republic of China’s] unfair trade and economic practices”.

Biden also raised the issue of transparency when it comes to dealing with pandemics such as Covid-19. The issue of Taiwan took up a lot of time with Biden stressing the importance of the “One China” policy while strongly opposing “unilateral efforts to change the status quo or undermine peace and stability across the Taiwan Strait”.

The Chinese President lobbed the ball back into the US court by attributing tensions around Taiwan to “attempts by the Taiwan authorities to look for US support for their independence agenda as well as the intention of some Americans to use Taiwan to contain China” and warning that “such moves are extremely dangerous, just like playing with fire. Whoever plays with fire will get burnt.” In a sign of Beijing’s discomfort with new groupings in the Indo-Pacific such as the Quad, Xi touched upon the role of platforms that created “divisions” in the world.

In the midst of all this push and pull, convergences were hard to find. Climate was one obvious area where the two nations had already jointly declared their intent to cut emissions at the COP26 Glasgow meeting. Another area, but largely unconfirmed, is a tentative willingness shown by the two leaders to explore talks on strategic arms control. With the Chinese nuclear stockpile set to increase dramatically over the next decade, the challenge is growing for the two nations to reset the terms of their nuclear engagement.

The US-China tango has implications for India much like the rest of the world. As India struggles with managing China’s rise, its ties with the US have blossomed. For the US, India is now a key nodal actor in the emerging geopolitical realities in the Indo-Pacific. Today, New Delhi is more confident than ever of managing its ties with Washington on the basis of contemporary shifts.

There are many in India who continue to advise India to tread cautiously as they relive old debates on “Chimerica” and “G-2”. But reality has moved far beyond what those terms were seeking to achieve. This is a unique moment in contemporary geopolitics, and India should remain alive to the need for being nimble enough to adapt quickly to the changing external environment.

Read at: Hindustantimes.com | Opinion |  Behind the facade of civility, the reality of the US-China dialogue | Harsh V Pant | 18 Nov 2021