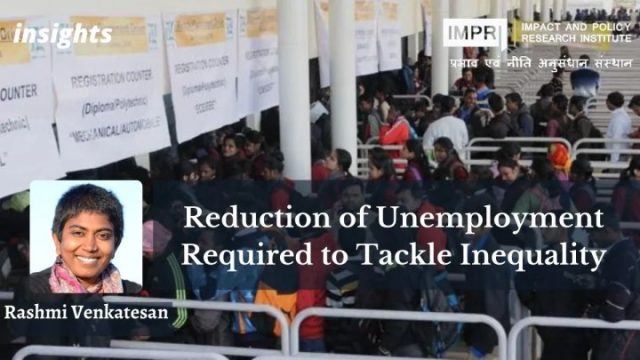 The labor market is characterized by low wages, wage disparities, and informalisation. Without correcting these structural bottlenecks, India cannot address the problem of growing inequality, writes the author.

Large-scale protests were seen last week in UP and Bihar over issues pertaining to the recruitment of railway jobs. These protests were led by the disgruntled aspirants of the recruitment exam conducted by the Railway Recruitment Board in the two states. Unemployment has been a chronic national issue for decades and this is the latest incident in the growing job crisis.

In spite of this, the Union Budget 2022-23 announced a few days ago, like most of its predecessors, is growth-oriented and rather apathetic towards unemployment. And while the issue of unemployment features religiously in every election cycle and Budget speech, it somehow fails to become the central political issue. Contrast this to the media uproar and worry that GDP figures trigger.

Why do abstract aggregate numbers like GDP cost us our sleep but high rates of unemployment barely make it to the next news cycle?

It appears that we think of GDP as a health report of ‘the economy’ that ‘affects all of us’ but unemployment is a problem of the unemployed alone, one that they can solve themselves through better education, skill development, etc. Much of this apathy stems from how we imagine the economy.

We are normally asked to think of the economy as a pie, delicious no doubt, but abstract and inanimate. And the objective of all economic policies is to increase the size of the pie because only then does everybody get to have a portion of it – after all who doesn’t want a bigger piece of the pie?

This is why growth, measured almost solely in terms of Gross Domestic Product (GDP), has become the predominant economic measure that everyone fixates upon.

But this visualization of the economy as a pie may be misleading. Instead, it is perhaps more accurate and useful to think of the economy as a living organism, like the human body – dynamic, alive, fundamentally interconnected and vulnerable to sickness. Measuring the health of the economy only through GDP is like measuring a person’s health only by their weight. Of course, it is an important parameter but definitely not the only one.

Unemployment and other social indicators are equally valuable and important markers of an economy’s health. Currently, India’s GDP growth for 2021-22 is projected to be around 9.2% but the unemployment level is also high at 7.9% as of Dec 2021, which translates to a whopping 53 million people.

Even if one disregards the effect of the pandemic and takes pre-pandemic figures, the unemployment rate in India has consistently remained higher than the South Asia average, staying over 5.5% of the total labor force.

It fares moderately better than some other developing countries but still lags behind many G20 economies and falls behind our immediate neighbors Pakistan, Bangladesh, Sri Lanka, and Bhutan. Relatedly, in 2019, the employment to population ratio was only 46.74%, lower than both the world average and South Asia average.

Gap between rich and poor widens

High rates of unemployment point to an economy whose circulatory system is malfunctioning. Because it is through wages, or in other words wages resulting from employment, that the working population can partake in the value that they help generate in the economy, popularly measured through GDP.

In other words, it helps in the circulation of value and wealth among various segments of society. Without employment, a significant portion of the population is not only deprived of the economy’s growth but cannot effectively participate in it.

According to the World Bank, in 2011, the wage bill as a percentage of GDP was only 4.5% and the average daily wage was estimated at a meager Rs. 247. However, profits, rent, and other income from capital increased faster than compensation towards labor.

The India Wage Report published by the ILO in 2018 shows that while India’s GDP quadrupled between 1993 and 2012, workers’ salaries only doubled in that period. Similarly, average labor productivity rose much faster than average real wages.

Contrast this with the fact that there are now 119 billionaires in India and their fortunes have increased almost 10 times in over a decade. Together, their wealth is placed at an astounding Rs. 24422 billion, which is higher than the entire budget of India for 2018-19.

What this shows is that the vast amount of income and wealth that is being generated in the economy is not reaching the majority of the population and is being siphoned off by a slim elite. As of 2018, the share of the top 10% in the national income of the country was 57.1% while the bottom 50% made up only 13.1%.

The incomes and wealth of the top 10% and 1% of the population have been steadily soaring while that of the bottom 50% continues to plummet. For the first time in history, the gap between the rich and poor is so unconscionably wide. And what’s even worse is that it continues to widen rapidly.

Economic inequality is inextricably linked to both the levels of employment/unemployment and the quality of employment that is available. Today, India is among the most unequal countries in the world and history shows us that a very high level of inequality and unemployment is economically, socially, and politically unsustainable.

Without correcting the entrenched structural bottlenecks of the labor market, including unemployment, India cannot effectively address the pressing problem of inequality. Therefore, employment is key, not just for economic equity but also for economic growth.

Full employment, as Keynes’ groundbreaking work argued, increased ‘aggregate demand’, which in turn would spur further economic activity. This was critical to maintaining the cycle of production and consumption in the economy.

After all, money in the hands of ordinary people will find its way back to the economy, especially the local economy, much faster than the accumulated (and often hidden) wealth of the super-rich. Therefore, instead of leaving it to the workings of the free market, Keynes advocated that States should actively spend and make policies to ensure full employment.

Paradoxically, one of the main justifications for neoliberal reforms was to create better and more job opportunities. Practically every economic policy promises job growth, whether in the form of targeted employment schemes like MGNREGA or more recent initiatives such as Make in India.

In fact, the State allows the exploitation of natural resources and doles out concessions, incentives and tax breaks to investors and industries in order to generate jobs. It is also the justification behind many market-oriented reforms including labour law reforms.

However, the current state of the labor market suggests that these policies have met with only limited success in creating meaningful employment.

The continuing problem of jobless growth

The violence in Bihar and UP draws sharp focus to the scarcity of the much-coveted ‘government jobs’. Much of the employment opportunities that have been created as a result of economic policies are flexible, precarious employment, largely in the private sector (especially in services), that have minimum wage stability, employment protection, and legal safeguards against adverse conditions of work. This is commonly referred to as ‘jobless growth.

It is an inevitable and even desired consequence of labor market reforms that seek to make labour flexible and focus mainly on maximizing economic efficiency. Despite decades of economic policies, the formal sector constitutes less than 10% of the Indian economy.

The real challenge of employment generation, therefore, is to create gainful employment which comes with wage and legal protections. The labor market in India continues to be characterized by low wages, wage inequality, and informalisation.

And current labor policies are likely to only precipitate these conditions. Coupled with the fact that India does not have a system of unemployment benefits or a wide social security net, the problem of poverty, precarity, and inequality will only intensify.

Reading the Union Budget in this backdrop shows that the problem of unemployment, especially formal employment continues to be steadfastly ignored. It promises a potential additional 60 lakh jobs through the Productivity Linked Incentive in 14 sectors, the operative word being ‘potential’. However, it focuses on capital investment and promoting SEZs while ignoring MSMEs, based on the false assumption that growth alone will eventually solve the problem of unemployment.

As commentators have pointed out, there is very little in the budget to stimulate aggregate demand in the economy, and funds allocated to MNGREGA have remained the same despite the growing demand for work under the scheme.

The violent protests in Bihar and UP are telling us something grave and urgent: the economy is ailing from clogged arteries. And we’ll be wise to take the message seriously, not just for the health of ‘the economy’ but for that of our society.

This article was first published in The News Minute as Without lowering unemployment rates, India cannot effectively address inequality on 8th February 2022

YouTube Video for The Future of Labour Codes: Impact and Way Forward from Trade Union Perspectives

Rashmi Venkatesan is an assistant professor at the National Law School of India University, Bengaluru.