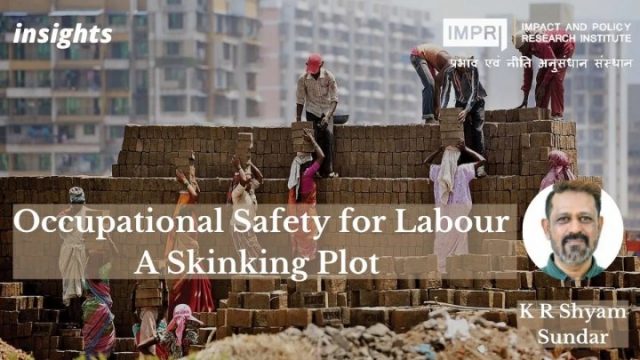 It is a fact that while industrial accidents occur often, only major accidents — say in construction or in a hazardous industry — are reported. Recently, the CRUSHED Report 2021 released by Safe in India (SII), reported in this daily, portrays a dismal picture concerning occupational safety and health in the auto sector.

However, occupational safety and health (OSH) has not received due attention from lawmakers and even trade unions in India. OSH is an existential human and labor right. There are two primary requirements to ensure safe workplaces, viz. a strong monitoring (inspections) and comprehensive database to frame corrective actions and policies. It becomes important then to understand the statistical profile relating to industrial accidents in India and the quality of inspections.

Statistics concerning industrial accidents are produced by the Labour Bureau. It compiles and publishes data on industrial injuries relating only to a few sectors, viz. factories, mines, railways, docks, and ports.

But the data suffer from several shortcomings. It is inexplicable why the Labour Bureau has not considered expanding the scope of statistics on injuries by adding sectors such as plantations, construction, the service sector, etc.

Even the data it produces is not representative of the situation in India as several major States default in the provision of data to the Labour Bureau. For example, during 2013-14, several major States such as Delhi, Gujarat, Kerala, Odisha, Punjab, Tamil Nadu, Uttar Pradesh, and West Bengal defaulted; then the all-India statistics were reduced to that extent.

Since data reporting is volatile, we may get some idea of the shares of some of these States by looking at their shares in some years. In this article, data on industrial injuries published in the Indian Labour Statistics, by the Labour Bureau (various issues) has been used. Gujarat’s share for 2006 was 14.98% of total fatal and 25.70% of total nonfatal injuries; Kerala’s shares for 2005, respectively,

Thus, considering the fact of fluctuations in injuries’ incidence, we can make a guarded statement that the reported figures for fatal injuries for all-India would be less by around 40%-50% and that for nonfatal injuries by at least 50%.

Even if States sent their data to the Labour Bureau, the States’ data are more likely to suffer from underreporting. As is well-known, under-reporting is more likely to be in the case of non-fatal injuries than fatal ones for obvious reasons. The SSI’s report, among others, shows massive under-reporting of industrial injuries occurring in Haryana.

Its report covering a segment of the auto sector in Gurugram and Faridabad showed that since 2017, on average 500 workers have received nonfatal injuries. The under-reporting of industrial injuries, unlike for strikes and lockouts, is a far more serious issue and cause for grave concern.

According to the Directorate General, Factory Advice and Labour Institutes (DGFASLI)’s Standard Reference Note for 2020 in 2019,

the proportion of working in sanctioned posts for factory inspectors (the employment rate) for India was 70.60%. But major States such as Maharashtra (38.93%), Gujarat (57.52%), Tamil Nadu (58.33%), and Bihar (47.62%) had poor employment rates of inspectors. In 2019, there was an inspector for every 487 registered factories: this reveals the heavy workload of inspectors.

The inspector per 1,000 workers employed in factories is a meager 0.04; put differently, there is an inspector for every 25,415 workers. The sheer inadequacy of the inspectorate system is telling.

The decline over the three sub-periods noted above for Maharashtra (31% to 12%) and Haryana (14% to 7%) was much higher (50% and over) than for others. So, the factory inspectorates were inadequately equipped, and worse, the inspection rates fell in almost all the States over the last 12 years.

While the pejorative term ‘inspector-raj’ is a crude exaggeration, there is some merit in the criticisms against the inspection system. Inspectors cannot feasibly inspect every factory, so they used their “discretion” to target the “easy” factories to demand compromising payments.

Many of them belong to the powerful industry groups which have successfully lobbied against the inspection system. Otherwise, inspector-raj is a cultivated myth.

For all India, the conviction rates (percentage of convictions in total cases decided) for 2015-2019 stood at 61.39% and the average fine per conviction was ₹12,231 (not good enough to be a deterrent).

However, the efficiency of the penal system is low as the percentage of decided cases out of total (cases pending at the beginning of the year plus those raised during the year) cases is a poor 15.74% during 2015-19. The SII’s findings are similar to these.

Contrary to popular (even academic) opinion, during the four of five years of 2015-19, some imprisonments took place primarily in Tamil Nadu (an astonishing figure of 11,215 in 2017 and 45 in other three years; still higher rates), Chhattisgarh (17 in two years), Telangana (3 in 2016) and one each in Kerala and Punjab. But in Haryana or in other States, there were no imprisonments.

Given the above statistical facts, two major issues are pertinent to legal and labor policy aspects. First, mindless liberalization of the inspection system as has been effected during the last 20 years will not promote sound labor market governance.

Second, simplifying the annual returns and self-certification systems weakens the already poorly placed labor statistical system regarding all variables — especially industrial injuries — thanks to low reporting by firms to State labor departments and the latter to the Labour Bureau.

So against these tenets, the labor codes, especially the OSH Code, the inspection, and the labor statistical systems should be reviewed as the Government is in the process of framing the Vision@2047 document for the Labour Ministry.