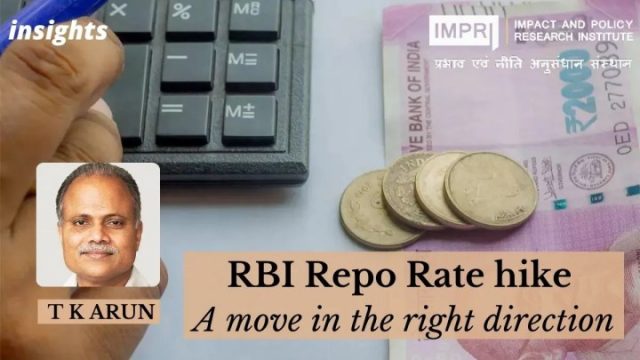 The Monetary Policy Committee of the Reserve Bank of India held an emergent meeting (off-cycle meeting, in RBI-speak that steers clear of emotive terms such as ’emergency’), and raised the central bank’s policy rates by 40 basis points. The central bank also decided to raise the cash reserve ratio by 50 basis points, sucking out Rs 87,000 crore of excess liquidity, a fraction of the liquidity overhang, a measure of which is provided by the fact that banks have been parking surplus funds with the RBI to the tune of Rs 2 lakh crore a day.

Such tightening of the monetary policy comes ahead of an expected rate increase (rate normalisation, in anodyne central-bank speak) of 50 basis points by the US Fed. This is bitter medicine, indeed, but needed medicine, nevertheless.

The RBI’s policy action comes in the wake of foreign portfolio investors staging a net capital outflow of $18.6 billion since the beginning of the year and India’s foreign exchange reserves coming down by over $32 billion since the first week of January. The RBI has been expending its reserves to hold the real effective exchange rate of the rupee more or less steady.

There is pressure on most central banks of the world to raise policy rates, in the wake of a spurt in inflation, following the February 24 invasion of Ukraine by Russia and the consequent supply disruptions of major commodities such as oil, wheat, sunflower oil, aluminium, steel and fertilizer.

The Economist’s Commodity Price Index for food is up 17.8% over the last 12 months, and that for crude by 58%. Supply disruptions in China, where the Communist Party and its chairman Xi Jinping can never go wrong and so, the nation must persist with its Wuhan-vintage Zero-Covid policy and shut down entire towns, complete with factories that are vital links of global supply chains, add to shortages, feeding the price rise and output crunch.

In terms of pure sense, price rise stemming from a supply shock should not be tackled by a demand-curbing rate rise. Higher interest rates that depress consumption and investment are designed to dampen excess demand. However, when inflation persists, it seeps into higher wage demands and, eventually, higher wages, leading to higher demand.

This is the time to squeeze out that additional demand with higher interest rates, to prevent prices from rising further as supply stays constrained. When to make that transition is a matter of judgment, and this is as much art as science. If inflation expectations take root, while the central bank waits for the right time to increase rates, subsequent rate rises will prove ineffective.

Probably, the RBI has got the timing right, and the extent of the rate rise right. It is still lower than the expected Fed rate hike. So, India’s interest rate rise will not fully neutralise the incentive for fund managers to tap into the higher returns on risk-free US government bonds by reallocating capital away from more volatile emerging markets.

The capital that flees India would weaken the rupee’s exchange rate. Footloose capital does not chase just interest rate differentials, but also growth prospects. A slightly weaker rupee would strengthen India’s exports at a time of slowing global trade but as yet buoyant Indian trade. The RBI must keep its policy growth positive, even from a point of view of financial stability.

What impact will the rate hike have on the Indian economy? The stock market has tanked, but that should not detain us overmuch. The market is overvalued, thanks to the liquidity sloshing around the world’s financial pipelines, following the multi-trillion-dollar creation of liquidity by the major central banks of the world to cushion the impact of the pandemic on their economies. The correction is not as steep as could have been expected because, one, the absorption of excess liquidity via sale of assets by the central banks would take time, and, two, growth prospects buoy valuations in a market like India’s.

Why should India grow at a time when the International Monetary Fund forecasts slowing global growth? The Indian economy had been slowing even before the pandemic hit. Past excesses in lending had come home to roost in huge non-performing assets. Banks have provided for the NPAs out of whatever meagre profits they generated and from fresh capital mop-ups. The creation of the state-backed bad bank promises better, less risky resolution of bad loans, from the perspective of bank managers who have to take the call on selling NPAs at a particular price. This makes them better prepared to start lending again. Bank loans have started rising at two-digit levels.

Growth across the board

The government is racing towards its next big political test of 2024. It must get growth going before that. That is why the Budget kept the fiscal deficit high and funded a big jump in capital expenditure. This capital spending will give a boost to infrastructure sectors. Bulldozers and backhoe loaders will once again find their use as earthmoving and construction equipment.

The demand for steel and other metals will rise — Tata Steel has been retiring debt and has just recently replaced TCS as the best performing company in the Tata stable. Real estate is getting out of its multi-year funk. Technology companies are conducting brisk hiring. While the informal sector continues to malinger, the organised sector is finding its feet, as testified to by rising Goods and Services Tax collections.

Still plentiful global liquidity will feed any green shoots anywhere in the world. Two sectors in India should gain. One comprises the cash-generating, risk-free assets such as toll roads that the government has earmarked for asset monetisation. The capital that is recycled from these assets can fund fresh infrastructure investments.

The other sector is startups. Startups multiply and have been growing those single horns on the forehead, eager to join the prized, 100-strong herd of Indian unicorns. Even those that fail to thrive in the long term serve a purpose right now, employing people, paying good money for talent, the said good money, in turn, generating demand for durable goods and transient experiences that generate a variety of jobs.

This happy story is contingent on the government living up to its promise to actually spend the big capital budget it announced, and finding takers for its asset monetisation scheme. It is in its self-interest to get growth going. That will also mean reining in its hooligan brigades spewing sectarian hatred and fraying the social fabric of the nation and scaring off investors.

This article was first published in The Federal as Repo rate hike: Right move by the RBI on 28 April 2022.