Home Insights How to save India from the wrath of heat waves? – IMPRI...
Facebook
Twitter
WhatsApp
Linkedin
Email
Print 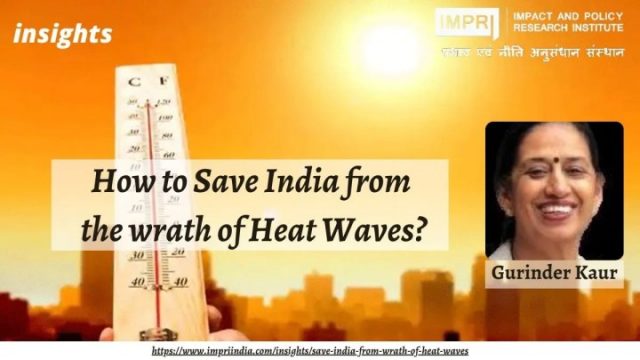 For the last two weeks, the states of North-West and Central India have been in the grip of severe heat waves. The Indian Meteorological Department (IMD) had last week issued an orange alert in five states: Punjab, Rajasthan, Haryana, Uttar Pradesh, and Odisha. On April 29, several districts of Punjab recorded temperatures above 42 degrees Celsius and Patiala was the hottest at 45.9 degrees Celsius while the Sirsa district in Haryana reached 46 degrees Celsius on the same day.

The Indian Meteorological Department has issued a heatwave warning using four colours: green, yellow, orange, and red,to ward off rising temperature.Each colour has its own meaning and comes with a set of protocols. The warnings are updated on a daily basis. Green (when no action required), yellow (watch and stay updated), orange (be prepared) and red (take precautionary measures).

In the month of March this year (2022), the temperature in cities like Dehradun, and Dharamshala in the Western Himalayan region has risen by 7 to 11 degree Celsius. In India, the rise in temperature in March has reduced the yield of wheat crop in the plains by 4.5 quintals per acre, while the production of apple crop in the hilly areas has also declined significantly.

The rise in March temperature in India this year has been due to non-receipt of rains by western disturbances. India received 89 per cent and 83 per cent less rainfall than average in March and April, respectively. Temperature has risen sharply due to lack of humidity in the air as a result of low rainfall in March and April.

The second installment of the sixth Intergovernmental Panel on Climate Change (IPCC) report mentions the decline in crop yields due to rising temperature, especially in the context of India. According to the report,  a 1 to 4 degree Celsius rise in temperature could reduce paddy production by 10 to 30 per cent and maize production by 25 to 70 per cent. The strongest evidence of this is the decline in wheat production due to the rise in temperature in March this year. If the temperature rises so fast then there may be a shortage of food grains in our country.

In addition, declining crop yields will reduce the income of farmers which will reduce their purchasing power and may also destabilize the economy of the country. Food shortages will push up food prices and make food out of reach of the poor, leading to an increase in malnutrition and an increase in starvation deaths in India.

India is not the only country suffering from rising temperatures. Incidents of temperature rise are being reported from different parts of the world. The Arctic and Antarctic poles also recorded warming in March this year. Concordia Station in Antarctica recorded a low of -11.8 degree Celsius, up from 40 degree Celsius this month. The temperature near the North Pole (Arctic) on March 18 was 30 degree Celsius higher than the average.

From Dallas through Abilene to Del Rio in the state of Texas (the United States of America), temperature averaged  5 to 9 degree Fahrenheit above normal making it the warmest December in 2021, in more than 130 years. In June 2021, the North-Western regions of Canada and the United States of America were scorched by heat waves. On June 29, British Columbia in Canada recorded the highest temperature in the world at 49.6 degree Celsius.

Surprisingly in the case of India, due to the La Nina phenomenon, the month of March became so hot with the rise in temperature that the spring after winter almost disappeared. During the La Nina phenomenon, the sea surface temperature in the Eastern and Central parts of the Pacific Ocean is colder than average, which makes the winter months in India colder and rainier than usual, but March this year is much different. The opposite was true.

The onset of heatwaves in April also created a power crisis in many states of the country as many thermal plants do not have adequate coal reserves for power generation. Our country is still generating 75 per cent of its electricity from coal. Coal releases more greenhouse gasses into the atmosphere than any other source, which raises the temperature locally and globally.

In August 2021, in  the first installment of the 6th IPCC Report, it was clearly stated that if greenhouse gas emissions were not reduced rapidly, summers would be longer and winters shorter in the coming decades. Extreme temperatures will rise in many areas and temperature will rise several degrees above average, leading to an increase in the incidence of heat waves.

According to a study by the Environmental Protection Agency, if the temperature rises by one degree Celsius, the incidence of heatwaves can increase 5 times and a 2 degree increase is likely to increase it 14 times. Rising temperature will not only increase the incidents of heatwaves, but will also multiply the incidence of droughts, and wildfires. In 2021, there were several wildfires in the Canadian province of British Columbia and in many parts of Europe after temperature rose above average. Rising temperature in India in April this year has led to forest fires in Dharamsala, Shimla, Mandi, and Solan districts of Himachal Pradesh.

In fact, the pine tree is not a local tree in the area. During British rule, the British cut down a large number of oak and Deodar trees here and planted pine trees to supplement it as they grow faster than the local trees and are more commercially viable. Even then, locals had raised their voices against the British government for planting pine trees.

Rising temperature with prolonged summer season and changing trends of heatwaves in India will cause rapid melting of glaciers in the Himalayas, which are already melting 10 times higher than average over the past few decades, according to a study by Leeds University. They are melting fast and their area has shrunk by 40 per cent in these decades.

The source of all the rivers in Northern India comes from the snow-capped mountains of the Himalayas. There will be a lot of loss of life and property. With the destruction of crops, there will be a shortage of food grains. Later, due to lack of snow, the water level in the rivers will decrease which will lead to drought conditions. People will be forced to struggle with scarcity of water and food.

Rising temperature has affected India due to rising heatwaves, floods, droughts, and rising sea levels and warming of ocean waters. The risk of displacement of people living in the coastal areas of India will also increase as India has 14 states and union territories located in the coastal areas.

The effects of warming will not be limited to the months of March and April and the hot and humid months of May and June. It will hit the lives of every Indian and the economy of the country as first the heat waves, then the drought, the forest fires, the melting of the Himalayan glaciers, the floods, the oceanic disasters, and the like will affect the impoverished population of India. Even the Indian people will face difficulties in meeting the basic necessities of life.

In order to control the rising temperature, we should increase the forest cover  and it should be 33 per cent at the national and state levels. Only local trees should be planted in each area as the varieties of trees brought from other places cause various problems such as pine trees grown in hilly areas increase the incidents of forest fires and eucalyptus trees of swamp areas result in the declining groundwater levels  in the plains.

According to the third installment of the sixth IPCC report, each country should make necessary adjustments in the means of transport in order to deal with the rise in temperature. If left unchecked, carbon dioxide emissions from the transport  sector alone could increase upto 50 per cent by 2050. Therefore, car-free infrastructure should be constructed i.e. separate lanes should be constructed on the roads for pedestrians and cyclists.

The Government of India should not rely solely on international initiatives. Our country desperately needs to make every effort at the national level. Temperature in the mountainous regions of the country is rising faster than other regions. Therefore, unnecessary construction in the name of economic development in the hilly areas of the country should be completely banned. In hilly states like Uttarakhand, and Himachal Pradesh, multipurpose projects on rivers should be allowed only according to the potential capacity of rivers and hilly areas.

Roads and tunnels in mountainous areas should be widened to that extent so as not to have any negative impact on the environment there.  Protecting the natural resources of the Western Ghats is crucial to protect South India from natural disasters. To that end, we must take the Gadgil Committee’s recommendations seriously.

To protect the coastal areas of the country, to ensure the protection of natural vegetation and wetlands, to protect the coastal areas and the environment of India, construction regulations and Environmental Impact Assessments in the Coastal Regulation Zones should be strictly enforced by making them nature and people-friendly and not dilute them to make them corporate-friendly as was done in 2018.

Rising surface temperature is no longer a problem of the future. We have been affected by this while the average temperature of the earth has risen by 1.1 degree Celsius. In India, March is hot, April is very hot and May may be  probably very very hot. Now, we have no time to think, just urgently need to make efforts at every level, from local to international, to save the planet and its people.

Read another piece by Gurinder Kaur on air pollution- Implications and Solutions: Air Pollution in Delhi and Surrounding Cities in IMPRI insights

Read another piece by Gurinder Kaur on Wildfires- How to avoid Wildfires? in IMPRI insights