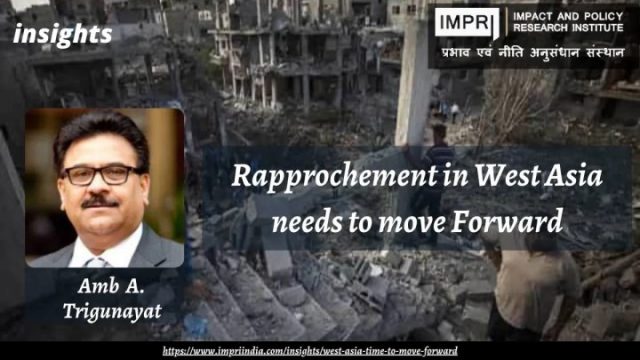 West Asia, which has been beset by the intra-regional rivalries and inter-religious contestations and festering age-old issues, appears to be heading towards a more credible rapprochement among the major competing nations. As the impact of the Russia -Ukraine War is being felt by the oil and non-oil producing countries even more in the pandemic era, the absence of the US as a credible security umbrella is shadowing out.

They have begun to look for other options in Russia and China -a bit prematurely, though, but no sane person would put their eggs for one hen to hatch. What if, it’s not a hen and just a Cock! But the fissures of the GCC countries with their long-time benefactor, the US of A, are evident even as Washington DC declared Doha as its non-NATO ally.

Having been disenchanted, by the developments and depleting security periphery and guarantees proclaimed by the Americans, the regional satraps have begun to not only indulge in their ‘Look East Policy’  but also to reach out to one another in a bid to avoid intra-regional escalation which would be difficult to contain once stoked. Moreover, as a result, especially in the wake of the Arab Spring, they had to engineer a more palatable ‘Vision 2030’ and consistent socio-economic reforms to address the lasting inequities in their social fabric.

Even as these changes take place in a gradual yet fashionable way, any external gaslighting could become an agency for disruption at home. Hence, an intra-regional modus vivendi is preferable over the insidious geo regional competition and zero-sum games in the region.

Last week, Turkish President Erdogan was in Jeddah at the invitation of King Salman. The rivalries between the GCC countries and the scions of the Ottomans are well known which also had an Erdoganian wish to lead the Islamic world in direct conflict with the Saudi’s historical Islamic leadership of the Ummah. It had also begun to flex its muscles across various theatres from Libya, to Nagorno to nearer home in the Mediterranean and Syria, becoming a real drone power.

Despite being a NATO member, it follows closer ties ‘love and hate ‘with Russia (S-400 saga). But pandemic and economic downturn and infructuous and unsustainable wars in the region and beyond brought in some logic to scale down and enter into productive partnerships with other regional leaders from Israel to Iran and UAE to Egypt to Saudi Arabia.

During his first visit in five years of turbulence, Erdogan said he conveyed to the Saudi leadership Turkish proposals in the Défense industry and shifting it to production instead of consumption. He stated that production could take place in Turkey or Saudi Arabia, and even a third country. “Turkey has the technology, and Saudi Arabia has the capital”. He also reiterated that the stability of Turkey and the Arab Gulf are indivisible.

Earlier, he had signed several deals with the UAE, including a USD 10 bn fund for investments in critical areas. Relationships with GCC countries have moved apace. While Qatar has been a favourite security and defence partner with similar ideologies for Turkey since the blockade, Erdogan hosting Sheikh Zayed of Abu Dhabi and paying the return visits led to greater mutually beneficial engagements and investments. Logic of 1+1 = 3 if not 11 follows.

Another major long-lasting contestation has been between Tehran and Riyadh who had even cut off diplomatic ties in 2016 after the Saudi embassy was attacked. Since then Iranian backed Houthis have been taking a toll on Saudi security and finances and extending their reach even to UAE. Baghdad, stuck between the Sunni and Shia dispensations, has been trying hard to engineer a rapprochement between the two sides.

Recently 5th round of talks was held in Baghdad, and the 6th might be direct. Iraqi PM Kadhemi claimed ‘Our brothers in Saudi Arabia and the Islamic Republic of Iran approach the dialogue with a big responsibility as demanded by the current regional situation and reconciliation is very near’. If that indeed happens, the countries in the region could head towards some sort of tenable regional security architecture as it already has reasonably good relations with other GCC countries who all want to live in peace and compete within the threshold.

As for Iranians, crippling sanctions and an unrelenting pandemic can be addressed if the Americans do their bit and JCPOA (aka Iran Nuclear Deal) is revived by addressing legitimate concerns of all sides otherwise we are also looking at a nuclear race in the region and eventual mutual destruction.

The regional powers, especially Saudi Arabia and UAE (currently in the UNSC), refusing to condemn Moscow’s invasion, have become wary of US indifference to their own concerns. Trust and reliability are being eroded especially after its abject humiliation by the Taliban and as Houthis continued to rain in their projectiles and drones on Riyadh, Jeddah and Abu Dhabi let alone the Biden Administration’s quest to normalize ties with Tehran.

No wonder, in the wake of the Ukraine crisis and increasing US pressure to enhance oil and gas production they have refused to be on board for their own benefit but also are not convinced about the extent of unprecedented sanctions against Russia. MBS (Saudi Crown Prince Mohammed bin Salman)  and MBZ (Sheikh Mohamed Bin Zayed, de facto ruler of UAE) not taking Biden’s call may be a diplomatic snub and a way to convey their displeasure that may not last long, but their options to liaise more closely with China -the largest consumer of hydrocarbons and Russia a potential defence and security partner-cannot be discounted.

No wonder, MBS spoke to Chinese President Xi and agreed to sell oil in Yuan but also to syncretise BRI with the Saudi Vision 2030 roadmap. UAE as such, is an accomplished Chinese partner in the region. Moreover, when the Beijing Winter Olympics were boycotted by the West, the leaders of Saudi Arabia, Qatar and Egypt among others had their gracious host in Xi Jinping. As such seven Arab countries – including Oman, Qatar, Saudi Arabia, and the UAE from the GCC bloc – are founding members of the Asian Infrastructure Investment Bank (AIIB).

Although Tehran and Tel Aviv rivalry has been perceived as an existential threat and both suffer from a mutually destructive syndrome, a certain change has been witnessed under Naftali Bennet’s government as it abjured its public display of displeasure with some US policies like Netanyahu did.

For example at a recent (April 27) ceremony of Israel’s Holocaust Martyrs and Heroes Day, PM Bennet made no mention of Iran. We need not read much in it but Israel’s continued efforts to normalise relations with Arab countries through the ‘Abraham Accords’ route would also crisscross its newfound partners’ wishes to ipso facto find a modus vivendi with Tehran.

Even,  Defence Minister Benny Gantz hosted an Iftar dinner for the Arab Ambassadors from UAE, EGYPT, Bahrain and Morocco, in the wake of skirmishes at Al Aqsa and rocket attacks assuring them of their intent to ensure freedom of worship. As such Israel took a somewhat ambiguous stance on Russia’s invasion and Bennet even tried to create an opening for dialogue between Putin and Zelensky. Beijing and Tel Aviv also continue to move forward gingerly.

Of course, the outcome of the European war will decide the fate of the new world order which will be more fractured and fraught with uncertainties. For Beijing, the less than sanguine behaviour of the West Asian powers towards US hegemony is a sweet spot and perhaps could be potentially exploited as they suspect being the next in line .  This will also tell upon the paths that key drivers of the Middle East will eventually choose. Today there is empirical evidence to suggest that more and more countries would either prefer multi-polar arrangements so that they can exercise their strategic autonomy rather than be made to choose between the Cold War 2.0 matrix.

One can recall Erdogan’s words in Saudi Arabia “We must embark on a new chapter with countries with whom we share similar ideas and beliefs. It is a period of making friends, not making enemies.” If true in letter and spirit it would augur well for the region. India, with excellent relations with major West Asian powers, also stands as an exemplar of strategic autonomy and may find many friends in the region willing to go along.

This article was first published in Financial Express as West Asia: Time to move forward

Read another piece by Amb Anil Triguniyat on Russia- Putin’s visit: From Russia with resolve in IMPRI insights.