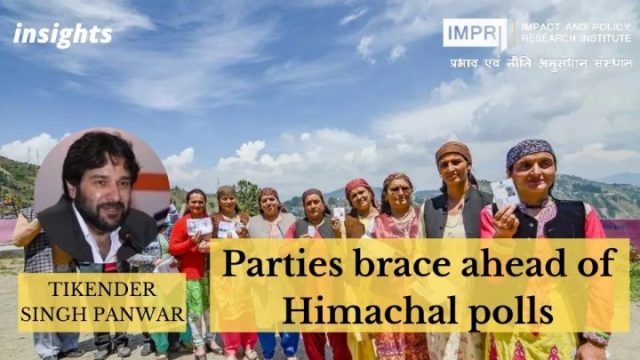 The political activity for the Assembly elections in November 2022 has intensified in Himachal Pradesh. Central leaders have started visiting the state more frequently, and for BJP president J P Nadda, who hails from Himachal, it will be an election that he would not like his party to lose.

The state has seen contests mainly between the BJP and Congress since 1990. But with the entry of the Aam Aadmi Party (AAP) and its recent victory in Punjab, there will be an interesting unfolding of events as the state advances toward the Assembly elections.

Why have incumbents always lost since 1990?

This is an interesting feature of Himachal state elections, where no party has been able to win consecutively for two terms. And the entry of the AAP with a pan Himachal ambition of contesting all the Assembly seats in the state makes this year’s elections more intriguing.

The peculiarity of Himachal’s development model

The answer to the question raised above lies in the peculiarity of the development model envisioned and implemented by YS Parmar, the architect of Himachal Pradesh and its founder chief minister. The essential feature of this model perhaps lies in a “strong state investment with effective land reforms and a strong economic stimulus from the Centre”.

Though Himachal’s statehood was announced in 1971, the state had come into being in 1948. Then through many crests and troughs – it was recognised as a Union Territory in 1956, the merger of princely states and finally statehood in 1971 – Himachal witnessed several periods of interventions and governance. What was the magic wand by which a state could achieve rapid advancement?

With no capital resources and a highly backward form of agriculture, the mountain state experienced frequent famines but still developed in a way that today is only next to Kerala in human development indices. YS Parmar was a leader of the Praja Mandal movement that championed the merger of the princely states in the Indian union. Simultaneously he knew the importance of land as a basic asset and focussed on the primary sector. During the 1960s, people were induced to practice agriculture and horticulture and asked to till/plough any land they could develop for agricultural purposes. After periodic interventions, land settlements were done, and land tenure rights were awarded. This was done along with land reforms and ‘Nau Taur’ (an Act was brought to give half an acre of land to every landless), and basic empowerment was ensured. Dalits and the marginalised sections also benefited.

A strong State stimulus then supported this. Health centres, schools, agriculture and horticulture universities, and scores of their extension centres were opened. Animal husbandry became an essential part of all this, and the state government ran large numbers of sheep breeding farms. By the 1980s, every household was provided with electricity.

In short, the state was there for every demand and issue of the people. “The people looked upon the state as the largest benefactor. The state had to function and perform.” How could a state government make such huge investments without many resources and a robust industrial base? The answer is simple.

The Centre was there to help the state and ensured that the state’s fiscal deficit was met with grants in aid. So, the state kept developing its social infrastructure, and the Centre regularly provided support. Hence a consciousness was created in a generation of people that the state has to perform both in social and economic sectors.

However, in the post-1990s era or the era of neoliberal economic reforms, the state signed MOUs with the Centre to reduce its fiscal deficit, adopting the Fiscal Responsibility Management Act (FRBM) in the state assembly to ensure that the fiscal deficit is tamed, which were the new guidelines of socio-economic development. But how could that be done? This was done by slashing support to the social sector. Thousands of vacant posts in the health and education sectors and most government departments were abolished in one stroke. Instead of regular employment, contractual and outsourcing became the norm. More privatisation of state services was done. The worst affected were the health and education sectors, where the cost of these services jumped phenomenally high.

To give an example from the electricity board, during the 1980s, when there were just 6 lakh subscribers, nearly 45,000 workers and employees were rendering their services. Currently, when there are over 23 lakh subscribers in the state, the total strength of employees has fallen to nearly 14,000. This explains the impact on society and the quality of services.

The state, which the people looked upon as a performing state, was incapacitated, and even if the state government had a will to perform, it could not have. Precisely this explains one of the significant reasons why after the 1990s, no party could repeat the elections despite stalwarts like Virbhadra Singh and PK Dhumal leading their respective parties and governments.

The people elected governments hoping that their issues of unemployment, continuing basic services, development of infrastructure etc., would continue. However, the state was/is unable to do it and thus, both the BJP and Congress could win only alternatively post the 1990s. The recent movement of the employees for the old pension scheme, in which it is estimated that more than 20,000 employees participated in a march to Vidhan Sabha, explains the dialectical relationship between the state apparatus and the people’s demand. The demands are getting reinforced time and again.

BJP, Cong will take AAP lightly at their peril

In such a background where the BJP’s ouster is imminent owing to its poor performance both in governance and for the reasons cited above, a cakewalk for the Congress may not be as easy as in the past. Though the Congress has been able to form a team with Pratibha Singh, former chief minister Virbhadra Singh’s wife and an MP from Mandi, appointed the state Congress president, still, there will be curious moments to watch as the elections draw near.

This is because the issues that the AAP has raised are pertinent to the creation and development of the state. Issues like free electricity up to 200 units per month each household, free water up to 20,000 litres per household or government-run schools and health centres are not issues that can be brushed aside. The BJP has announced 125 free electricity units and half travel fare for women, sensing the gravity of these issues. The Congress, too, in states like Rajasthan and Chattisgarh, has proven that the old pension scheme can be brought back, which could become a central plank in these elections.

But the people at large have started to look at a third alternative, if not seriously, at least in their discussions. However, most who have joined the AAP are turncoats with little or no capacity of their own to reach out to the people. Just parroting what is happening in Delhi or Punjab may not help, but the discussion is right there amongst the people.  A section of former bureaucrats have also joined the AAP and is trying to build this as an alternate space against both the BJP and Congress.

Only time will tell how things mature as we near the election dates. However, one thing is certain. This election will be an interesting one where people’s issues will dominate the mood, and those who think these are ‘freebies’ forget to understand that these are existential issues for a majority of the people. The State under the Constitution is liable to provide it to its citizens.

The article was first published in Deccan Herald as Himachal polls: All about bare necessities on 2 May 2022.