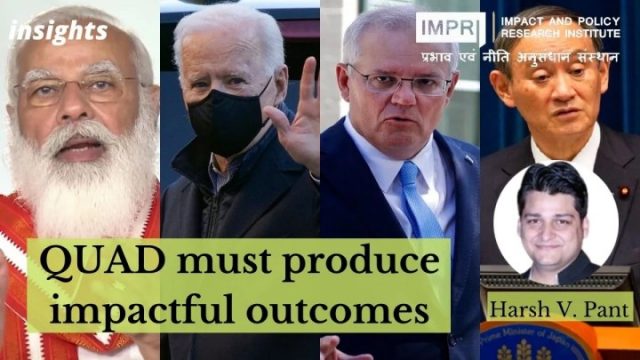 The second in-person summit of the Quadrilateral Security Dialogue, Quad, in Japan managed to generate a lot of buzz. While the global media covered it in its usual breathless manner, China also ensured that the event retained its edge as its warplanes joined the Russians to approach Japanese airspace.

It was a calibrated show of force to make a point when Tokyo was hosting leaders from the United States (US), Australia, and India. Chinese and Russian fighter jets carrying out joint flights over the Sea of Japan and the East China Sea would have made headlines in any case, but the fact that Beijing and Moscow decided to make this a show of force at a time when the leaders of Quad were meeting was a determined effort to make their presence felt.

But China need not have worried. It is precisely this extravagant display of aggression that made the revival of Quad possible in the first place. Otherwise, it would have disappeared without even a whimper after its first outing in 2007. Strategic miscalculation is now a key feature of the Chinese Communist Party’s foreign policy. And the Tokyo summit of Quad made it amply clear that just as China has no intention of reassessing its choices, key regional players, too, remain more determined than ever to push back against Beijing’s revisionism.

Chinese and Russian fighter jets carrying out joint flights over the Sea of Japan and the East China Sea would have made headlines in any case, but the fact that Beijing and Moscow decided to make this a show of force at a time when the leaders of Quad were meeting was a determined effort to make their presence felt.

In that context, Quad has already made a significant impression. First, for a platform that was widely derided till recently as one that will never be able to achieve any coherence worth recognising, the rise of Quad over the last year-and-a-half has been one of the most remarkable developments in the global institutional architecture. There was a time when one country or another in the grouping was viewed as the weak link.

Today, all four powers seem equally invested in making the platform effective. Leaders from the four nations have met regularly over the last year with the Tokyo summit being the fourth such engagement, underscoring top-level commitment to making Quad work.

Second, in this era of global fragmentation, there is an institutional void at the heart of the Indo-Pacific. Multilateral institutions have been found wanting whether it is the Covid-19 crisis, Chinese expansionism around its periphery, or Russian aggression in Ukraine.

The inability of the extant global governance architecture to manage contemporary challenges is a stark reminder of the “false promise” of international institutions. This is particularly acute in the relatively new strategic expanse of the Indo-Pacific where China’s rise and its willingness to challenge norms have jeopardised regional stability that has been the foundation of this region’s economic prosperity.

Quad is an interesting institutional innovation that manages to answer some of the questions about regional governance in the Indo-Pacific. It is not a formal alliance but a coalition of four like-minded nations with “trust” being the operative variable that not only converges on a range of issues, but also has an inherent capability to convert their aspirations into operational realities.

Third, Quad continues to focus the world’s attention on the real strategic challenge for the global order — the rise of China and the accompanying flux in the Indo-Pacific, the centre of gravity of global politics and economics. The world is undergoing multiple disruptions, but none match the scale and scope of the power transition that is happening in the Indo-Pacific.

By definition, power transitions are turbulent, but when there is a revisionist power at the heart of those transitions, this turbulence can be catastrophic if not managed effectively. So even when the world is riveted with Eurasia and clear differences between India and the three members of the grouping, Quad and its engagements have underlined that it won’t let the focus shift away from the strategic geography of the Indo-Pacific and its discontents.

It is not surprising, therefore, that China has been tracking the evolution of Quad carefully and its response to the strengthening of this grouping has been getting ever shriller. From suggesting that the group would “dissipate like seafoam”, Beijing today talks of Quad as a “tool for containing and besieging China to maintain US hegemony.”

Chinese foreign minister Wang Yi recently lashed out at the platform as an “Indo-Pacific North Atlantic Treaty Organization (NATO)” accusing it of “trumpeting the Cold War mentality” and “stoking geopolitical rivalry.” From its initial nonchalance, China now finds the platform important enough that it is forced to demonstrate its air prowess during the summit to make its displeasure clear.

While Chinese behaviour remains a critical variable, Quad members have been underscoring its positive agenda, which is much more about responding to the aspirations of the wider region with a focus on the climate crisis, health, emerging technologies and supply chain resilience.

In Tokyo, the US unveiled the Indo-Pacific Economic Framework — an administrative arrangement expected to lay the groundwork for rules around the digital economy and supply chains in the region — even as Quad leaders decided to extend more than $50 billion in infrastructure aid and investment in the Indo-Pacific over the next five years as well as launch the Indo-Pacific Partnership for Maritime Domain Awareness initiative to help countries track illegal fishing and monitor other activities in regional waters.

Quad members have been successful in effectively seizing the opportunities emerging out of China’s over-ambitious foreign policy to revitalise the foundations of their engagements. But its long-term sustenance will depend on whether it can move beyond the initial excitement generated by high-level summitry and deliver tangible results for regional states that are keen to reduce their reliance on China, but lack credible alternatives. Prime Minister Narendra Modi was right to talk about the timeliness of delivery as a key determinant for the success of Quad. Now, New Delhi must take the lead to ensure that Quad delivers — and quickly.

This article was published in ORF as Beyond summits, Quad must deliver quickly on 28 May 2022.