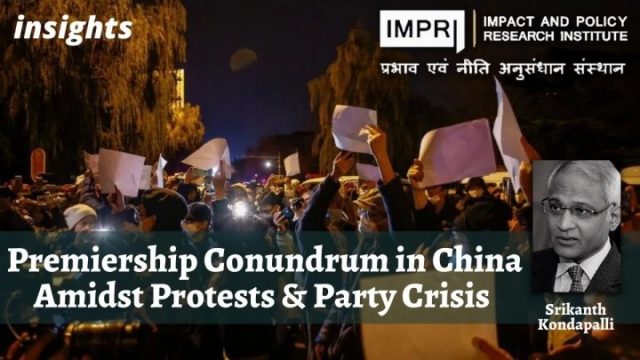 In an unprecedented development since the Tiananmen Square incident in 1989, China is witnessing a series of pitched battles across the country between the commoners and the authorities on the debilitating restrictions imposed on people for the past three years in the name of controlling the pandemic.

At the last count, the protests have spread to over 25 cities and over 80 universities, totaling over 50 since the last week of November when nearly a dozen residents were charred to death at Urumqi in Xinjiang in a locked-down high-rise building that caught fire.

Moreover, the communist party was split vertically between pro-student leaders like Zhao Ziyang and hardliners like Li Peng. Today, while political tensions exist between rival factions in the communist party such as the “New Zhijiang Army” of Xi Jinping and the Communist Youth League of Hu Jintao and Li Keqiang, the protests have not divided the crucial party center yet.

China witnessed “mass incidents” periodically after the Tiananmen Square incident in 1989. According to official estimates, over 5500 such incidents were reported in 1991, rising continuously to over 87,000 in 2005 and to 1,80,000 in 2010. However, China’s Premier has discontinued providing such statistics anymore.

Given the nature of the surveillance state in China and other repressive mechanisms like the “social credit” system, it would be hard to think of scores of people joining any protest in China today. However, the fact that many people ranging from students to workers, ethnic minorities to Han Chinese were participating in large numbers not only indicated that COVID control mechanisms had enraged a large section of the population but also the ability to express openly their dissent to the top powers.

Also, despite the domination over the cyber domain and curbs on social networking sites in China, many have utilized such channels to assemble and organize protests across the country. Even though such protests remained decentralized and devoid of backing, funding, and nationwide networks, the fact that they were able to spread like wildfire indicates the growing political dissent in China and the limitations of the authoritarian regime.

For the newly anointed Xi Jinping with a third term at the 20th party congress this October, the widespread political protests across the country are challenging if not unnerving. While Xi enjoys an absolute majority in the crucial party hierarchies, the protests tend to undermine his political authority and in the medium term, his legitimacy.

What Is Xi’s Strategy To Retain His Term?

Even though there is no imminent threat to Xi’s political leadership, despite some slogans in this regard by the protestors, he is expected to broad-base his appeal to the public for any meaningful solution to the problem at hand. Xi had earlier jettisoned rival factional leaders like Li Keqiang, Wang Yang, Hu Chunhua, and others from gaining a foothold in the politburo standing committee. Now, he needs coalition partners to douse the protests across the country.

Xi also faces the dilemma of the intensity of the crackdown on the protestors and could easily stamp out dissent, given the overwhelming internal security build-up in China for the past several decades. In fact, today, China has more internal security budgetary allocations than the defense sector. The nature of surveillance has also been sharpened. However, the more the repression, the more is the intensity of protests likely in the current context, thus, creating regime security anxieties.

In such a scenario, rethinking the “dynamic zero-COVID” policies earlier reiterated at the 20th party congress in October might be Xi’s government’s best bet.

This article was first published in the Quint as China Churning: Can Xi Jinping Retain Premiership Amid Protests & Party Crisis? on Dec 05, 2022.

Read more by the author related to the issue at IMPRI Insights.

Read other articles by the author