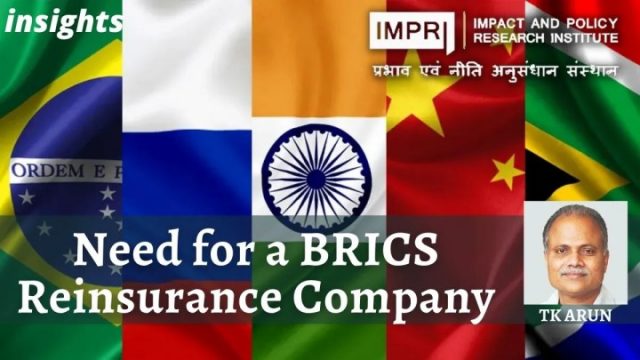 Should India worry about the price cap of $60 per barrel the European Union and the G7 have decided to impose on Russian crude? Probably not. What India can probably do is initiate the creation of a new, large financial company for re-insurance, with multilateral backing. The time has come for a new BRICS Re.

India, China, and some other emerging markets have been buying Russian crude at a discount to the market price of crude, thanks to the West’s boycott of things Russian in the wake of the Ukraine war. India has no reason to change course. The West’s proposed price cap on Russian crude will force many countries to take sides in the ongoing tussle between the West and Russia. India should stick to its stand of taking decisions in its own sovereign interest and, if that calls for it, flouting Western diktat.

Russia will probably refuse to sell crude to anyone who wishes to abide by the arbitrary price cap. The price cap, let us be clear, is a step back by the major Western powers from the boycott they had proposed. Having realized the economic and political repercussions of boycotting oil from Russia, and pushing up the price of oil from elsewhere, the Western powers have now changed tack and adopted its new strategy. This is an attempt to eat your cake and have it, too.

They want Russian oil to continue to flow, but deny Russia a share of its revenue by repressing its export price, and thus punish it for its war on Ukraine. Come Christmas, they hope to sit as smug as little Jack Horner, who, it may be recalled, sat in a corner, eating a Christmas Pie, put his thumb, took out a plum, and said, what a good boy am I.

The mechanism the European Union and the G7 have in mind to impose a price cap is to deny insurance to oil cargoes from Russia billed at any price higher than the cap they prescribe for that period. Without proper insurance, tankers would refuse to take on Russian crude to their intended destinations in Asia, or elsewhere.

Why can’t Russia find alternate insurers, who refuse to knuckle down under EU pressure? Insurers are not in short supply, but reinsurers are. The major financial institutions, from whom the primary insurers buy insurance, are all located in, and thus, controlled by the West. Out of the largest 15 reinsurance companies, only three are non-Western: Chinese, Korean, and Indian reinsurers figure, respectively at the 8th, 13th, and 15th places.

It has been reported that Russia has been building up a shadow tanker fleet of its own, to help bypass sanctions. These tankers also would like to have insurance. Whoever sells them insurance coverage would need to buy reinsurance.

Now, Chinese and Indian reinsurers could offer reinsurance to cargoes meant for their domestic use. But that would call for accepting the concentrated risk of attracting Western wrath over colluding with Russia to thwart the price cap. It would be ideal to have a multilateral reinsurer, with wider national representation, against which the West would find it hard to move.

BRICS is the ideal grouping to launch such a reinsurance company. The grouping of Brazil, Russia, India, China, and South Africa has already sponsored one financial institution, the New Development Bank. This is useful but not nearly as useful as a reinsurance outfit would be. Call it BRICS Re.

BRICS Re would have backing from much of the developing world. With accelerating Climate Change wreaking unpredictably and severe havoc across the world, developing countries are particularly vulnerable. To hedge against climate risk, appealing to the munificence of the rich world is way less attractive as a coping mechanism, compared to risk reduction, and risk transfer.

Risk reduction is about intelligent planning and engineering. Risk transfer brings us to insurance. Insurance calls for reinsurance. BRICS Re could step into these reinsurance shoes with a neat fit. The rich world would find it way easier to support developing country climate resilience if they could channel a good part of it through investment in catastrophe bonds issued by a reinsurer, whom primary insurers against climate risk rely on for reinsurance.

A catastrophe bond offers investors a risk premium in its yield but subsides, that is, does not have to repay the principal, in case the catastrophe it is helping insure against actually materializes. All major pools of savings from the rich world could be tempted to invest a tiny sliver of their investible funds in such catastrophe bonds issued by a BRICS Re, both to signal virtue and to generate superior returns in calamity-free years.

How viable would a BRICS Re be? In terms of business, it would have no scarcity of demand. In terms of expert, and professional capacity, again, there would be no shortage. Indian finance wizzes proliferate nearly as fast as the coronavirus. As for capital, China would find this more valuable an investment opportunity than many belts and road projects. Russia, China, India, and South Africa would have a direct interest in BRICS Re underwriting the insurance cover on Russian crude shipments that violate the West’s price cap.

Brazil would broaden the geographical spread of emerging market solidarity to Latin America as well. Its President-elect Luiz Inácio Lula da Silva would be more than happy to sign up for such a Global South alliance in support of their shared interests.

The sensible thing for India to do is to keep buying Russian crude, set up a BRICS Re to offer reinsurance to those who insure the safe passage of Russian crude without price caps to wherever it is welcome, and keep engaging both sides in the Ukraine war.

This article was first published in Moneycontrol as Time for a BRICS reinsurance company on Dec 05, 2022.