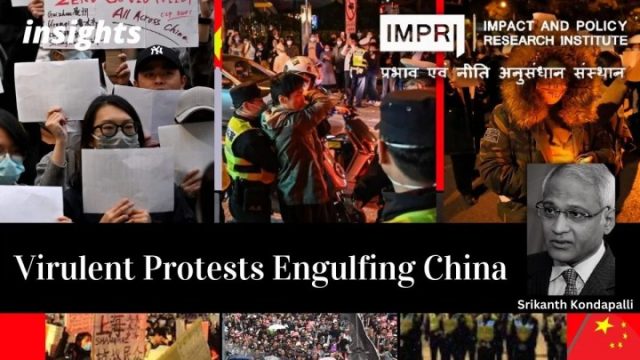 More than nine decades ago, on January 5, 1930, Mao Zedong wrote a letter titled “A single spark can start a prairie fire” offering an optimistic view of the communist movement that eventually spread across the country, seizing state power in 1949. On the reverse, years of mishandling the country’s affairs — specifically imposing a relentlessly draconian policy of “dynamic zero Covid” — created conditions for the spreading of such a fire across the country recently.

China witnessed unprecedented protests last month, a first since the massive protests at Tiananmen Square in 1989. The current upsurge — against the excessive intrusion of the party-state in the lives of hundreds of millions of people who are subjected to arbitrary lockdowns, strict border controls, food shortages, unemployment, debilitating quarantine procedures, intensive surveillance, misuse of authority, and enormous hardships — is spontaneous, rapid and inclusive. Stringent Covid policies benefited certain business interests of the pharmaceutical and health industry at the cost of the social sector.

Even though nearly 90 percent of the people are said to be vaccinated, the number of infections is rising substantially to nearly 30,000 infections a day, suggesting the ineffectiveness of the China-developed vaccines. In fact, Brazilians found to their chagrin that the effectiveness of Chinese vaccines was just over 56 percent. Even then, China refuses to procure advanced vaccines from abroad.

China bragged about how “open, transparent and efficient” it was in its “victorious” war against the pandemic in the last three years and how its centralized political leadership responded concertedly in controlling infections. It also threw mud on several democratic countries in an all-out ideological campaign. China’s Communist Party organs even practised “vulture diplomacy” when infections increased in India and other countries last year.

The protests found resonances in far-flung western areas of Xinjiang when a locked-down apartment caught fire on November 24, killing nearly a dozen according to official figures. It found echoes from nooks and corners of China with “Urumqi Road” placards becoming iconic symbols.

Major cities in China, including Beijing, Shanghai, Guangzhou, Wuhan, Chongqing, Chengdu, Xian, Taiyuan, Jinan, and Hangzhou, were engulfed in the fast-spreading prairie fire. These are unprecedented pitched battles of affected people with the police and clearly indicate a loss of political legitimacy of the powers that be.

That the protests happened soon after the 20th Communist Party congress has surprised many despite Xi Jinping’s bulldozing of the party leadership with his factional leaders’ domination and demolishment of rival political groups.

In the political landscape of China, the death of a major political leader provides an opportunity to rally public opinion. The first Premier Zhou Enlai’s death in 1976 led to protests at Tiananmen Square in favor of the “people’s Premier”. Chinese Communist Party leader Hu Yaobang’s death on April 15, 1989, resulted in a cascading effect, leading to massive protests in the next couple of months. However, Jiang Zemin’s claim to power that year was based on clamping down on protests in Shanghai.

Unlike the 1989 Tiananmen Square protests, where anti-corruption and ushering of democracy were the main slogans raised by students and others, the current round of spontaneous protests in China is overwhelmingly related to the stringent Covid protocols across the country.

Also, unlike the 1989 massacre of students, when the Army was brought in and the police forces remained relatively dormant, in the current protests, the police and paramilitary forces are taking the lead in countering protestors. The police were seen verifying even the mobile phones of commuters to find if they have accessed or were transmitting protest-related information. The official narrative considered these to be “grey rhino” phenomena with “ulterior motives”, short of calling the protestors “counter-revolutionaries” such as in 1989.

That economic hardship is one of the main problems of extensive lockdowns is reflected in the removal of metal barriers in Guangzhou and a rampage in the Foxconn factory at Zhengzhou for employment retention benefit issues and others. Pitched battles were also seen elsewhere based on economic demands.

Unlike in 1989, the current protests rapidly dominated the imagination of hundreds of millions of people across the country, given the widespread use of social networking sites such as WeChat, Weibo, Douyin, Douban, and others, despite the presence of “wumao” cyber police across the spectrum.

Much like the “guerrillas” that Mao spoke about in 1930, the Chinese netizens were waging a high-tech “guerrilla” warfare against the party state. While diversity marks the nature of the protests across the country, minimal demands include allowing public vigils and mourning, ending lockdowns, the release of protestors, and protecting civil rights.

Another innovative protest method is a public display of blank white papers – alluding to “colored revolutions” that battered Ukraine, Kyrgyzstan, Egypt, Myanmar, and other countries. Of course, there was also the message for Shanghai metro commuters on December 1, calling for the resignation of Xi Jinping.

That at least some have targeted the highest leadership for the current pandemic debacle suggests two things — the loss of political legitimacy of Xi’s Covid policies which could be amended with relative relaxation under popular resistance and the possible intensification of popular struggle and further clamping down by authorities.

Already, on November 20, the National Health Commission announced 20 measures that could be seen as removing stringent rules to counter the pandemic, including lifting the mandatory PCR tests, access to provision stores, travel, and others.

On November 30, the Covid pandemic in-charge, Vice Premier Sun Chunlan, announced measures that indicated possible stepping down from high alert to medium levels with implications for a relaxation in current policies. Sun alluded to the Omicron variant becoming less lethal, in addition to vaccination drives and prevention control experience. These amendments, of course, must be vetted through the politburo meeting due this month.

However, questioning the center of power by the protestors soon after Xi began acquiring absolute leadership at the just concluded 20th party congress surprised many. For the party congress was amended to include “two establishes,” — Xi as the “core” of the leadership of the party and his “thought” as having the “guiding” role for the rank and file. Further, the amendments also included “two safeguards” — that of safeguarding the “core” status of Xi and his centralized authority. The popular protests depleted these newly enshrined tenets in the party constitution. It contests the recent phrase of “the party leads everything.”

Given the overwhelming support in the political establishment, and control of all levers of coercive state apparatuses, it is likely that the prairie fire raging across the country could be doused in the coming months. However, despite such crushing strength of the party-state apparatuses, the protests spread to over 20 cities, indicating the possible resurgence of the movement in the coming years in different forms, even after lifting pandemic-related curbs.

This article was first published in Deccan Herald as ‘Prairie fires’ rage across China on Dec 4, 2022